Thong dee, not so dee

Taronga Zoo’s Thong Dee, the Thai elephant cow found to be five months pregnant this week, seemed a good deal calmer yesterday than the humans fiercely debating her welfare. Environmental groups say Thong Dee, who is aged either eight or nine, is too young to be breeding and her pregnancy points to serious mismanagement by zoo staff. The NSW Greens are urging the federal Environment Minister, Peter Garrett, to put the case before the Commonwealth Director of Public Prosecutions, saying the zoo has breached its guidelines. A spokeswoman for Mr Garrett said the Department of Environment had asked the zoo for information about Thong Dee. The zoo maintains that expert zoological advice, sought early last year, found her perfectly ready to have babies, and believes she is already nine, regarded by many sources as the minimum breeding age. An international elephant tracking website says Thong Dee was born in 2000, making her eight this year. A 2004 report produced by the Proboscid and Perissodactyl Taxon Advisory Group said: “Elephants for breeding must be at least nine years old (12 years is ideal)”. The management plan adopted by the zoo says 11 is the best breeding age. But advice from the reproductive biologist Dr Thomas Hildebrandt, received early last year, supersedes the original breeding instructions accepted by the zoo, said a spokesman for Taronga, Mark Williams.

Thank god for the Greens. And all strength to the arm of the Proboscid and Perissodactyl Taxon Advisory Group. New Mandala will be following this closely, until the randy bull responsible is bought to justice! The following identikit image has been prepared to assist in investigations. 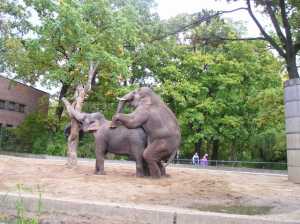