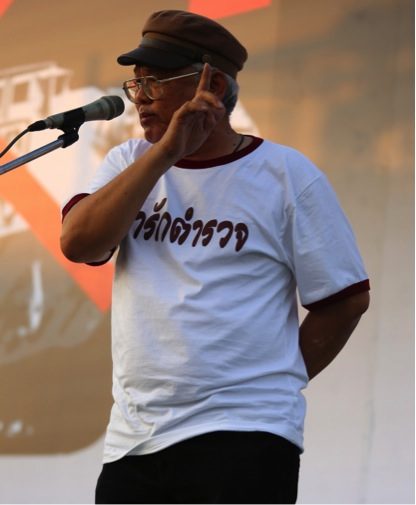 Thoughts of a pro-government leader He has been a politician for thirty years and is a member of the ruling Pheu Thai party and serves as the chairman of the Committee on Foreign Affairs for the House of Representatives. After a crowd-rousing speech that mocked the anti-government protesters and their leaders demonstrating in Bangkok and called for the election on 2 February 2014 to be held as planned he spoke to me.

Sunai started by explaining that the opposition Democrat party, despite their name, are not and never have been democratic.

He said: “The Democrats are not the party of democracy. They started 60 years ago taking power by joining with the military for a coup d’état.

“The Democrats won the election because they had the support of an invisible hand.”

He claimed that the only reason the Democrats have ever won elections or held power is because they have had the help of an “invisible hand”. He said: “Other parties cannot succeed because they do not have the support of an invisible hand.”

He refused to elaborate on what he meant by an “invisible hand,” but it can be assumed that he was probably referring to the institution of the monarchy and the traditional elite. Though, because of Thailand’s draconian lèse-majesté he could only refer to them in a very oblique way because to mention them explicitly would almost certainly see him jailed.

He explained that recently in Thailand a new elite that makes its money from technology has emerged. This new elite is in conflict with the traditional elite and is epitomized by the exiled former PM Thaksin Shinawatra.

He said: “The old style elite get their benefit from the land, from their interest in banks, but the new style take benefits from high tech.”

Again, he is not specific about who the old style elite are but according to Forbes the Crown Property Bureau (CPB), which manages the crown’s properties and investments, is the largest landowner in the country. It owns 3,493 acres in central Bangkok and another 12,500 acres in the rest of the country. It also owns 25 per cent of the Siam Commercial Bank.

He claimed that unlike the traditional elite who relied on corruption to the detriment of normal people, Thaksin and the new elite did not disadvantage the poor because they relied on technology like mobile phones and the Internet to make their money.

Whether this is completely true is debatable. The anti-government protesters in Bangkok claim that the Shinawatra family is corrupt and they certainly have been involved in some dubious deals. For instance there were accusations of corruption and massive tax avoidance in the family’s sale of Shin Corporation in 2006 that led to the first anti-Thaksin protests.

Sunai clearly approves of Thaksin but he was at pains to point out that not all the Red Shirts gave him their unconditional backing. He explained that for the past five years many different Red Shirt groups with different views had sprung up.

He said that the Red Shirts were not just a single group but an alliance of many different groups not controlled by any single person.

Of Thaksin, Sunai said: “He is the first prime minister to make state welfare policies to give money to support people.”

He claimed that it was easy to make such policies, but that the Democrats had never done so because they would be against the interests of the traditional elite who supported the Democrats.

This caused Thaksin problems and was to the advantage of the Democrats because the army and traditional elites wanted to maintain the staus quo so they backed the Democrats even further and held a military coup in 2006.

He said: “In Thailand it is very, very easy to have a coup d’état, every Thai has a phobia about coups d’état.”

Sunai said he is sure that Suthep Thaugsuban and the Democrats are hoping to provoke another military coup. Asked whether he thought another coup was likely he said there might be one, but it was less likely than previously.

He gave a number of reasons for this:

Firstly he believes that the alliances backing Suthep and the Democrats are starting to split. As proof of this he points to the recent emergence of the White Shirt group started by professors at Thammasat University in Bangkok.

He said: “Most of them do not like Thaksin but they know that if we want to evolve we need democracy. They are not Yellow Shirts or Red Shirts, they just want democracy.”

Another reason Sunai believes a coup is less likely is because the military are less united than they have been in the past, with some generals favouring a coup and others against it.

He also explained that the “invisible hand” might not be able to play its previous role.

He said: “It is very important that after the coup you need an invisible hand to support and now the invisible hand is…” before tailing off and not completing his sentence.

I asked if he meant that the “invisible hand” is now not so strong. He refused to confirm anything, laughed and said: ”You said that,” meaning that I could say that but he was not free to say it.

He also thinks that because Thailand is at the centre of ASEAN and has received so much foreign investment from G8 countries there will be a lot of external pressure against a coup. He believes that the only way forward is democracy.

Rather shockingly, considering his previous statements on the likelihood of a coup he added: “If you do it another way [other than democracy] there could be a civil war.”

This took me aback somewhat and I asked him if he really believed civil war might break out.

“Today if you go back to Bangkok at night it looks like a small civil war. Right now when the sun sets there is shooting every day.”

According to reports there are indeed several incidences of shots being fired and at least one man has been killed.

He explains that the real cause of conflict in Thailand is not down to Suthep and Thaksin but because Thailand has restrictive laws that prevent people saying what they want to.

I ask if he means the lèse-majesté laws. He says yes. He compared the Thai people to a deaf mute who cannot communicate because they do not know how to use sign language. He said: “We cannot tell you our true problems, when you ask me I just have to give you sweet words I cannot tell you the truth.”

When asked if the law stifles discussion of what will happen when the king dies he said: “that is something we cannot think about. You [meaning non-Thais] can think about it but we have to be like the deaf mute.”

Sunai said that in 21st Century Thailand because of the influence of the “invisible hand” democracy is poor.

He said that while the economy has massively grown and developed in Thailand politics still remains very under-developed. The growing economic success has led to people becoming more independent but they are not allowed to have independent ideas.

They cannot support different parties and argue and defend their views like in the West because the Democrats are using the threat of lèse-majesté to stifle independent thought. In Thailand people are dissuaded from believing what they want because the “invisible hand” tries to persuade everyone to believe in the same thing.

This is incompatible with democracy and, he believes, has led to great conflict and intransigence within Thai society that did not exist in the past when the status quo was not threatened

Sunai also bemoaned the double standards used in law enforcement, which have also led to conflict. He insinuated that anti-government supporters could get away with saying things that pro-government supporters would be arrested for. As an example he said: “Mr Suthep said that Thaksin wants to be the president. This is illegal but Suthep can say can say that, but I cannot say it.”

Sunai paints a picture of a deeply divided nation with an uncertain immediate future.