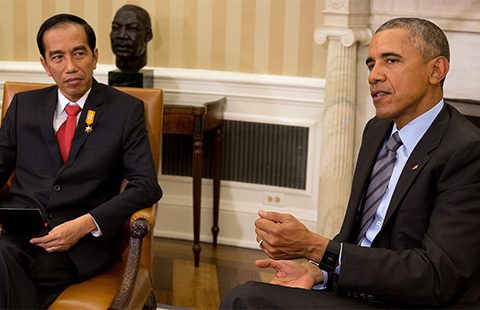 To TPP or not to TPP – that is Jokowi’s question Indonesia’s president needs to be wary of Washington’s overtures when it comes to world’s largest trade agreement.

In February, Indonesia President Joko ‘Jokowi’ Widodo was in the United States to attend the ASEAN-US Summit.

The sit-down in Sunnylands was one of the most important recent high-level meetings between ASEAN and Washington — especially after the regional countries decided to elevate the status of their relationship with the US into a “strategic partnership” last year.

In a press conference before boarding the presidential carrier to California, Jokowi outlined a number of important points. First, his trip to the US was about strengthening a “partnership for peace and prosperity.” This vision stresses that both the US and ASEAN countries have an obligation to contribute to global peace and wealth.

At the same time, the relations between the two should bring about mutual benefits for the people of both ASEAN and the US. Beyond the rhetoric there were some signs that these noble goals could be made reality.

During his visit, Jokowi brought up several ways that the US and Indonesia could work together, including increasing cooperation in the field of small to medium enterprises, entrepreneurship, innovation, and development of the digital economy.

Meanwhile, President Barrack Obama asked the Indonesians to lead a special session on the issue of terrorism. Indonesia, as Jokowi emphasised, can share much needed experience and insight when it comes to preventing radicalisation and combating terrorism.

But it’s fair to say that the ASEAN-US Summit was also a tool for Washington to advance its own interests, mainly in the areas of geopolitics and economics. The geopolitical aspect includes the South China Sea, which has now become the “new battlefield” between Washington and Beijing.

Not less important is the Trans-Pacific Partnership (TPP), which was discussed extensively during the Summit under the guise of enhancing trade and investments between ASEAN and the US. Four ASEAN countries have already signed up to it — Brunei, Malaysia, Singapore, and Vietnam. Indonesia, the Philippines, and Thailand are currently weighing up the pros and cons of participating in what is supposedly the world’s largest free trade agreement.

The US Ambassador to Indonesia Robert Orris Blake Jr recently reiterated the strategic importance of Indonesia for the TPP. These include the country’s very large market, the rapid growth of the middle class, and the large number of youth.

The past six months have seen a serious discussion at the governmental level about the possibility of Indonesia joining. As always, there are pros and cons in this debate. There are those who are very supportive of the initiative, even though they have not yet seen or read the detailed documents. There are also those who prefer to be cautious because Indonesia will only be a market for foreign products.

Late last year, Jokowi stated that the government was carefully examining the benefits and the drawbacks of participating in the TPP. It was said that there was a possibility for Indonesian products to enter the TPP market. However, Jokowi also believed that Indonesia could simply become a large market for the US and its allies.

It is hoped that after the Summit meeting in Sunnylands the Indonesian government will be able to truly represent its people on the issue. Undeniably, Jakarta should protect the sovereignty of its national economy as well as small businesses.

Why? Because that is what has been repeatedly said by Washington when putting forward the TPP agenda. In his speech in front of the 12 ministers from the TPP participating countries one year ago, Obama made this clear.

The Trans-Pacific Partnership finished negotiations on an agreement that reflects America’s values and gives our workers the fair shot at success they deserve. This partnership levels the playing field for our farmers, ranchers, and manufacturers by eliminating more than 18,000 taxes that various countries put on our products.

Obama’s speech clearly indicates the TPP’s real roadmap for the future. The government in Jakarta should not deviate its course by blindly following the direction of other countries or partnerships.