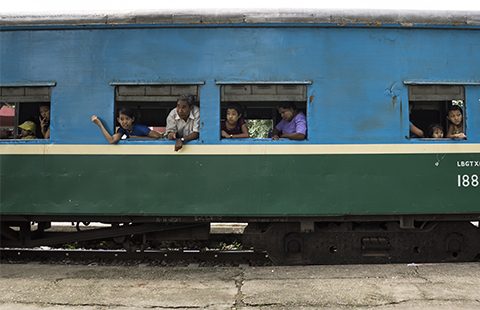 Passengers on a train. Photo by James Walsh.

Foreign visitors are one way the country can quickly expand its economy.

Myanmar is full of opportunities. It is a rapidly democratising country that has only opened up to the world in the past decade. However, with comparatively low tourist numbers, Myanmar is missing out on a way to quickly grow its economy.

Several factors make Myanmar well placed to capitalise on the tourism industry, however it also faces some intense competition. Neighbouring Thailand, China and India are huge tourist destinations, with the Philippines and Malaysia also established players in the industry and with several decades’ more experience. Myanmar must compete not only in terms of the quality of the tourist experience, but also in the global marketing arena.

Yet the country’s location is not all bad news. Myanmar has the good fortune to be situated among highly-populous countries each with an emerging middle class. Sharing the region with over half the world’s population means that if Myanmar can market itself well, it will have no shortage of visitors.

Myanmar’s location in Asia, combined with its diverse ethnic culture and history, means that the country can also offer niche experiences that may not be found elsewhere.

Being a late entrant to the market may also not be all that bad. A long period of isolation means that its beautiful beaches and unique cultural attractions are still in pristine condition.

It also means Myanmar can learn from the experience of near neighbours. Thailand in particular can offer a great deal of lessons for Myanmar’s budding tourism industry. Well-documented challenges posed by Thailand’s extremely high tourist volumes provide Myanmar with the opportunity to develop infrastructure and systems to deal with such issues in advance.

In fact, while on a recent two-week Australian National University study tour of Myanmar, it was suggested to me by a local that Thailand’s infamous red light industry ameliorates one potential negative impact of tourism; Myanmar is spared from some of the more unsavoury visitors as they can satisfy their debauchery elsewhere.

Myanmar also enjoys favourable economic conditions conducive to tourism. Like other countries in Southeast Asia, Myanmar’s exchange rate drastically improves the purchasing power of foreign visitors, making it an attractive destination. Moreover, there are a high number of unskilled but literate people in the workforce eager for well-paying jobs, providing an excellent base for a service-centric industry.

Financial resources are also increasingly available; in 2013 the tourism industry was the fourth greatest recipient of approved foreign direct investment, losing only to the capital-intensive industries of oil and gas, power, and mining.

However, it is very difficult to do business in Myanmar, and this prevents foreign tourism companies with established expertise and resources from investing. In a 2014 OECD report, Myanmar was second only to China in terms of restrictive foreign investment laws. In the 2015 Ease of Doing Business Report, Myanmar ranked a paltry 177 out of 189 countries.

Although the government appears to be working to encourage more foreign direct investment by way of regulatory reform, it still has a long way to go. Fortunately, the tourism industry can be much more self-dependant than material-focused industries that depend on foreign imports and investment. The only necessary import is the tourists themselves.

Another challenge is the comparatively low standard of tourist infrastructure. Energy shortages need to be overcome, as it is quite difficult to run a hotel in the dark, and visitors generally do not enjoy being trapped in elevators.

Finally, there remains significant uncertainty about the political situation. As we see in Thailand, even bloodless political upheaval drastically affects tourism. Uncertainty also remains about state-sponsored and ethno-religious violence. There are also quite grave concerns about ongoing human rights abuses.

These political and human rights challenges negatively affect the perception of Myanmar as a welcoming tourist destination. They also disrupt market certainty, which discourages foreign investment.

Although prioritising a peaceful transition to democracy and peace-building will lead to greater tourist inflows and investment, simultaneous economic measures should also be taken.

Transport infrastructure between major tourist points should be a focal point for investment. This is something that neighbouring Thailand has done well, with many smooth super-highways built for travel between tourist destinations. Myanmar should take the opportunity to build on the existing expertise it has developed through domestic projects such as the 20-lane highway in Naypitaw.

Myanmar should invest in a creative global marketing campaign, with a focus on differentiating its tourist offerings from those of its neighbours – especially Thailand. Another good marketing strategy is to send students on exchange. Foreign students generate curiosity and interest about their country at a grassroots level, which is something that airport billboards cannot achieve.

The government should also focus on the human aspect of tourism, as good service means repeat business. Simple things, such as preventing service staff from smoking in the room that they are cleaning all the way through to complex hotel management systems, are important when other countries in the region have already set a high standard in hospitality.

These skills can be attained through investing in sector-specific education. For example, sending talented people in the hospitality industry abroad to study at hospitality academies. It just so happens that Australia has some of the best hotel schools in the Asia-Pacific.

See the opportunities yet?