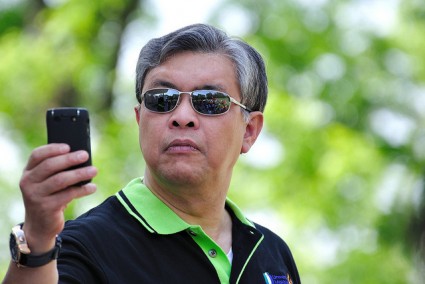 While the United Malays National Organisation’s (UMNO) ethnocentric policies are well-known, there was never a serious comparison with Nazi Germany. Not at least until today. Associate Professor Rueban Balasubramaniam, an expert on the rule of law on Malaysia, and whose research focuses on legal philosophy, had this to say:

Until now, it has seemed remote to draw parallels between Umno’s ethnocratic and semi-authoritarian politics and Nazi Germany. But that changed with Home Minister Zahid Hamidi’s recent remarks endorsing a “shoot to kill” policy by the police as needed to protect, in his words, “our people” (ethnic Malays) from the threat of violence at the hands of organised gangs (as he duly noted largely comprises non-Malays). These remarks reflect a pattern of thought that bears a striking resemblance to the views of the Nazi ideologue, Carl Schmitt and makes the drawing of the parallel now far more plausible.

The politics of identity has been part and parcel of Malaysia. Has UMNO now decided that it does not need non-Malay support anymore, and can go it alone with solely the support from Bumiputeras in Sabah and Sarawak as argued by Clive Kessler? If that is true, what would this mean for Malaysia? How far will UMNO take it’s us versus them policy?

Note: The shoot to kill speech (audio) is available HERE. It is in Bahasa Malaysia.