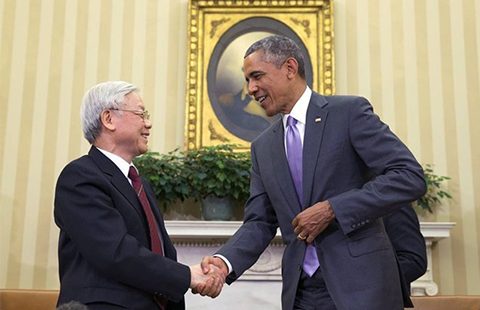 The US-Vietnam partnership is gaining ground amid high-level visits, and China’s re-emergence.

There has been a lot of chatter in Washington lately about the strengthening of an emerging strategic partnership between two old foes, the United States and Vietnam.

The tone and level of talks between the two countries have changed rapidly in the last two years, as the US has moved to reassure allies and partners in the region in light of China’s increasingly bullish maneuvers in the South China Sea. Last year, the US partially lifted its ban on weapons exports to Vietnam in light of maritime security concerns. Last year, President Obama reportedly told Vietnamese Prime Minister Nguyen Tan Dung that he would visit Vietnam soon.

The Obama administration has struggled to define and implement its strategic “pivot” or “rebalance” to Asia which the White House announced in 2011. Asian leaders responded with a mix of optimism and consternation. China’s leadership in particular construed the announcement as a policy of containment.

US policymakers have vociferously reiterated that the pivot is not meant to contain China, but to promote freedom of navigation on the high seas, commerce, and peaceful economic growth in a region that is home to many of today’s highest performing economies.

China has rapidly built up islands and atolls from rocks and submerged sandbars, laying down landing strips and fortifying strategic positions in the South China Sea. Vietnam and the Philippines have both expressed grave concerns over China’s increasingly aggressive forays in what they perceive as their territorial waters.

Last year, the Philippines took its grievances against China’s encroachment in the South China Sea to the International Court of Justice. Vietnamese officials have expressed solidarity with the Philippines and sought to strengthen its partnership with the United States in an effort to forestall China’s assertive maneuvers. Vietnam submitted statements to the Permanent Court of Arbitration (PCA) at The Hague in December 2014. The US for its part has sought to encourage China to be a “responsible stakeholder” and criticised its territorial claims in the South China Sea.

Last year, when China’s National Petroleum Corporation moved an oil survey rig into disputed waters, Vietnamese citizens took to the streets burning down Chinese factories in violent protests. Several days of mayhem led to the evacuation of thousands of Chinese expatriates before Vietnamese police forces finally clamped down on unrest. The disorder showed clearly Vietnam’s sensitivity to Chinese intrusion in its territorial waters.

The unfolding maritime security complex remains fluid. One Vietnam analyst, who requested confidentiality, told me, “The momentum is with the initiator. The problem is China is going to ask first and ask for forgiveness later.” Hawkish voices in Washington have encouraged the US Government to take a firmer stance to counter China’s moves in the Pacific.

From the Vietnamese standpoint, “the US is a fickle ally,” according to the same analyst. When President Obama declares the importance of the Trans-Pacific Partnership (TPP) for promoting rules-based trade with Asian countries, but the Congress can barely pass Trade Promotion Authority, the US loses credibility in the eyes of Asian leaders.

China presents a more uniform and predictable foreign policy when President Xi Jinping delivers on major infrastructure investments and high-stakes political projects abroad. Chinese policymakers travel to foreign countries with business leaders in tow, ready to make deals with their foreign counterparts. The US has a different way of doing business and keeps diplomacy separate.

However, if the leaders of the 12 nations negotiating the TPP come to an agreement on a final deal, the US stands to retain credibility regarding its global leadership. While the Chinese “no strings attached” investment model has achieved notable success internationally, securing vital natural resources for energy-hungry China vis-├а-vis oil pipelines and other major projects, many nations, particularly Vietnam, have pushed back against the invasive Chinese approach.

Vietnam’s leadership has dragged its feet on a controversial Chinese bauxite mining project in its central highlands in response to loud opposition from environmental activists and civil society groups. PM Dung faced challenges to his leadership in 2012, but he is now as strong as he has ever been. His privatisation and anti-corruption drive have simultaneously strengthened the economy and concentrated his power, despite provoking some hostility from the conservative ranks in his Communist Party.

The TPP might just be the icing on the cake that Dung needs for Vietnam’s economic revitalisation. The Vietnam analyst cited earlier told me, “They need the external pressure to drive it home domestically” due to reluctance among conservatives distrustful of further liberalisation and international treaties.

Estimated at 6 per cent GDP growth this year and around 6 per cent projected for next year, the Vietnamese economy seems to be on stable footing and has buoyed Dung’s push to secure the top position in the upcoming leadership transition.

Dung appears poised to replace Trong as General Secretary of the Communist Party sometime in early 2016. President Truong Tan Sang was favored for the top position for some time, particularly around the nadir of Dung’s strength around 2012, when conservative forces mounted a putsch that nearly removed the Prime Minister from power.

General Secretary Trong’s visit to Washington comes at a very interesting time, likely lending him, a bitter opponent of PM Dung, political capital at home. Despite political rivalry heating up in Hanoi ahead of the leadership transition, Washington has shown its interest in strengthening relations with Vietnam’s leadership.

Obama’s decision to receive the General Secretary, for which there is no equivalent position in the US Government, evidenced the White House’s commitment to developing the partnership. The two reportedly discussed climate change, defence, and trade, while Obama did not shy away from candid discussion of differences over human rights.

With bilateral trade at $35 billion last year and expected to grow to $57 billion by 2020, and with shared security concerns over Chinese posturing in the South China Sea, the two have a great deal of common ground to work upon.

Members of Congress, the White House, the Defense Department, and human rights groups, should work together to encourage a productive relationship between the two countries going forward.

Hunter Marston is a Southeast Asia analyst based in Washington, DC. He has a MA in Southeast Asia Studies from the University of Washington and spent two years in Ho Chi Minh City, Vietnam.