Indonesian President Susilo Bambang Yudhoyono’s legacy of worsening religious intolerance and related violence will be one of the biggest challenges his successor will face. Indonesia holds presidential elections on July 9.

While Yudhoyono likes to speak about Indonesia’s “religious harmony,” over the past 10 years the country’s religious minorities, including Christians, Shia, Ahmadiyah and some indigenous faiths, have become increasingly besieged by often violent Sunni Islamist militants. Yudhoyono’s response to that intolerance has been empty rhetoric and turning a blind eye to elements of his government passively or actively complicit in abuses of the rights of religious minorities.

Islamist militants have grown accustomed to attacking minorities with impunity. In certain cases, in which the security forces and prosecutors have actually intervened in such incidents, the result has frequently been the prosecution and imprisonment of representatives of the victimized minorities–not the perpetrators, with charges of “blasphemy” or “creating unrest.”

Escalation in reported cases of religious violence against minorities in Indonesia

The roots of the escalation in religious intolerance and related violence began in2005 when Yudhoyono opened the Indonesian Ulama Council congress, the umbrella organization of many Muslim groups, by announcing his intention to “take strict measures against deviant beliefs.” In March 2006 Yudhoyono’s cabinet produced a decree dedicated to “Religious Harmony, Empowering Religious Harmony Forums, and Constructing Houses of Worship.”

The decree requires Indonesia’s 33 provinces and some 500 regencies to establish so-called Religious Harmony Forums (Forum Kerukunan Umat Beragama or FKUB) as advisory bodies to governors, mayors and regents. The decree stipulates that the composition of FKUBs should “mirror the composition of religions” in each area. Consequently, the dominant religion in any given area –whether it be Muslim in western Indonesia and Christian in areas of eastern Indonesia–has the majority of members in a 17-strong FKUB (in a regency or mayoralty) or a 21-member provincial FKUB. 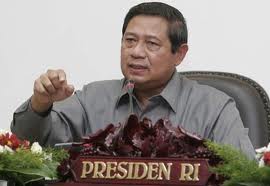 The decree also restricts the construction of houses of worship to the “real needs” and “composition of the population” in the area. A permit for constructing a house of worship requires:

The result of the decree has been a legally sanctioned block on construction of new houses of worship for religious minorities in areas where Muslims are in the majority, including the islands of Java and Sumatra. In some cases, the decree has even blocked Christian congregations from renovating existing church buildings. Militant Islamists have in some areas effectively hijacked the decree and imposed vigilante-style enforcement of alleged violations. On March 21, 2013, in Bekasi, a suburb of Jakarta, the local government used an excavator vehicle to demolish the new red-brick structure of the Batak Protestant Christian Church (Huria Kristen Batak Protestan, HKBP). Officials ordered the church demolished for lack of a building permit on the demand of the Islamic People’s Forum in Taman Sari (Forum Umat Islam Taman Sari), a militant Islamist organization.

The Communion of Churches in Indonesia, a grouping of Protestant churches, has criticized the decree as more repressive than a similar regulation promulgated in 1969 during the rule of the late dictator Suharto.

Since 2005, Yudhoyono’s government has also aggressively enforced the country’s 1965 blasphemy law, an overbroad and vague legal holdover from Sukarno’s authoritarian rule. More than 100 people have been prosecuted for blasphemy since 2005 including Sebastian Joe Tajir, a Muslim sentenced to four years’ imprisonment in November 2012 for posting comments about the existence of God on his Facebook page.

When a group of Muslim scholars, including former president Abdurrahman Wahid, challenged the discriminatory nature of the blasphemy law in the Constitutional Court, Yudhoyono and his cabinet vigorously defended it. The court, in an 8-1 decision on April 19, 2010, ruled that the 1965 blasphemy law, which provides criminal penalties for those who express religious beliefs deviating from the law’s tenets of protecting six officially recognized religions, is a lawful restriction of minority religious beliefs because it allows for the maintenance of “religious harmony.” 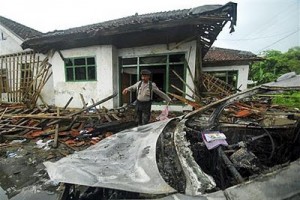 The ruins of a house belonging to a leader of the Ahmadiyah community, attacked by a mob in February 2011. Photo Credit: VOA News

That decree paved the way for Sunni Islamist militant groups such as the Islamic Defenders Front (Front Pembela Islam, FPI) to begin targeting Ahmadiyah and their mosques with harassment, intimidation and violence. The most egregious example of that violence occurred in February 2011, when Muslim militants killed three Ahmadiyah men in Cikeusik, western Java, in an unprovoked attack during which police on the scene refused to intervene to help the Ahmadiyah. Across Java and Sumatra there are currently more than 100 Ahmadiyah mosques shuttered at the order of local governments.

President Yudhoyono has failed to act to roll back these abuses and to protect the rights of Indonesia’s religious minorities. Instead, in October 2012 Yudhoyono devoted his speech at the United Nations General Assembly in New York to call on UN member countries to adopt an international legally binding instrument to ban blasphemy against religious symbols.

As Indonesians prepare to go to the polls on July 9 to elect Yudhoyono’s successor, they should demand that their presidential candidates explain how they’ll address the damage that Yudhoyono has done to religious freedom over the past decade.

Failure to do so will only worsen religious intolerance and create new victims of harassment, intimidation and violence.

Andreas Harsono is an Indonesia researcher at Human Rights Watch. You can follow him on Twitter at @AndreasHarsono.