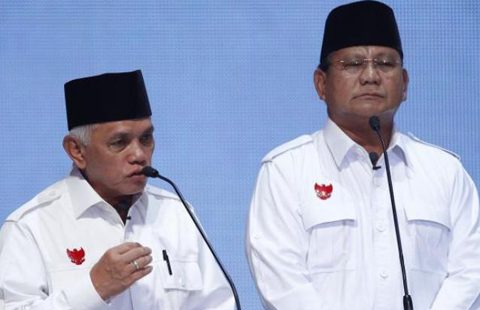 Hatta Rajasa (left) and running mate Prabow. In uniform, but not in step?

A closer look at the religious dynamics of Prabowo’s coalition reveals that it may not be as it would seem, writes Greg Fealy.

Much has been made in the media of the broad support for Prabowo Subianto’s presidential campaign from Islamic parties, community groups and leading preachers and scholars.

Four of the five Islamic parties that contested the April legislative elections – the National Mandate Party (PAN), the Prosperous Justice Party (PKS), the United Development Party (PPP) and the Crescent Star Party (PBB) – have joined Prabowo’s coalition. The only Islamic party to back Joko Widodo (Jokowi) is the National Awakening Party (PKB). This means that Prabowo, at least nominally, has support from almost three-quarters of the 175 Islamic party representatives in Indonesia’s new parliament.

Perhaps most controversial of all has been the support for Prabowo from hard line Islamist groups, such as the Islamic Defenders’ Front (FPI) and Forum Ukhuwah Islamiyah (FUI). FPI’s Habib Rizieq Shihab and FUI’s Muhammad al-Khaththath have spoken out strongly in favour of Prabowo, declaring him to be the candidate who will best protect the interests of the Islamic community.

Thus, the widely held view is that Prabowo not only enjoys the unwavering support of much of the Islamic community but that he will also reward Islamic groups for their support by appointing their leaders to key positions and also acceding to their wishes on religious issues. This has led numerous liberal-minded commentators to speculate that Prabowo will pursue a more Islamically driven or sectarian line than Yudhoyono’s government.

They note that three of the parties supporting Prabowo – PPP, PKS and PBB – are, to varying degrees, Islamist in orientation, and either openly or tacitly favour greater implementation of sharia law and restrictions on minority religious rights. In addition to this, FPI and FUI have frequently led campaigns against so-called ‘deviant’ Islamic sects, such as Ahmadiyah and the Shia, and opposed construction or the operation of ‘problematic’ churches and temples that are deemed in breach of regulations governing places of worship.

A closer look at the religious dynamics of Prabowo’s coalition, however, reveals that it may not be as solid and trusting as it would seem.

To begin with, many Islamic groups have come to Prabowo’s cause with misgivings, some of them deeply held. PAN and PPP were both internally divided over which presidential candidate to support. Many in PAN, including its chairman, Hatta Rajasa, initially sought to side with Jokowi believing that his political orientation was more in keeping with their own. But the PAN chairman eventually took the party into coalition with Prabowo because the he offered a more certain political deal, including offering the vice-presidential candidacy to Hatta (for a hefty fee, it must be added). This also avoided a clash with the redoubtable PAN grandee Amien Rais, who was fiercely critical of Jokowi and who had long championed Prabowo on nationalist and Islamic grounds.

PPP has similarly zigzagged towards Prabowo. A sizeable majority of the party’s leaders were pro-Jokowi and at a February conference, Prabowo was omitted from the list of eight possible PPP presidential nominees. During the parliamentary election campaign, PPP chairman and Religious Affairs Minister, Suryadharma Ali, infuriated the party board by appearing at Prabowo’s main rally in Jakarta and later declaring that PPP would nominate Prabowo.

This led pro-Jokowi board members and provincial leaders to attempt Suryadharma’s overthrow. He eventually survived the no-confidence motion but only after withdrawing statements of PPP support for Prabowo. All appeared set for PPP to formally nominate Jokowi after the election, but intensive last-moment lobbying and horse-trading by the Prabowo camp in the lead-up to the nomination secured the party’s surprise support. Seemingly without embarrassment, PPP leaders such as Suharso Monoarfa and Emron Pangkapi, who had for weeks been extolling Jokowi’s virtues as a presidential candidate, now declared themselves convinced of Prabowo’s superiority.

Even FPI and FUI are ambivalent about Prabowo. On the one hand, many recall his generous financial and logistical support to Islamic groups in 1998 when they were opposing Soeharto’s removal and then supporting Habibie’s shaky presidency. They also remembered his endorsement of anti-Chinese and anti-Christian sentiments at that time, which resonated strongly with their own views.

On the other hand, Prabowo is not regarded as a particularly devout Muslim in Islamist circles and has not, to my knowledge, ever been asked to lead prayers when visiting Islamic groups (which Jokowi is often invited to do). Moreover, his own family is religiously diverse, with his brother Hashim being a prominent born-again Christian and numerous other close relatives being non-Muslim as well. It was also Prabowo who pressed for Basuki Tjahaja Purnama (Ahok), a Chinese Christian, to be Jokowi’s vice-gubernatorial candidate in Jakarta, much to the chagrin of Islamist groups.

When Jokowi and Ahok were elected in September 2012, Prabowo pointedly described the result as a ‘victory for pluralism’. In Islamist circles, ‘pluralism’ is a disagreeable term that is taken to mean acceptance of and equality of truth for all religions. And so, while Islamist groups are vocal supporters of Prabowo during the campaign, they harbour concerns about his real agenda and would not be backing him were there an alternative candidate with better Islamic credentials.

This brings us to the issue of what would these Islamic parties and civil society groups do if, as numerous commentators are warning, Prabowo was elected sought to dismantle democracy and return Indonesia to a more authoritarian system. Many of his Islamic supporters, as described above, have not joined Prabowo out of personal allegiance or close identification with his policies. Rather, he has presented them with the prospect of more tangible political rewards than has Jokowi and, for some, represents a less distasteful figure than his presidential rival.

It is not in the interests of any of these groups to easily cede power to a president whom they do not fully trust.

Greg Fealy is head of the Department of Political and Social Change at the ANU College of Asia and the Pacific.