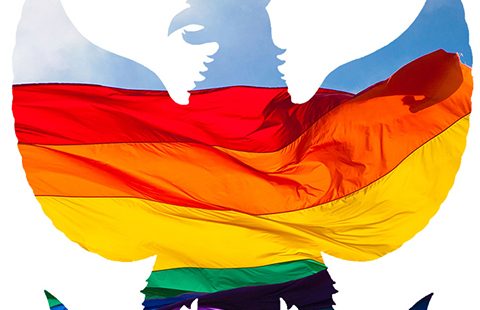 Indonesian LGBT people and their activities have come under intense scrutiny in the last few weeks.

It all began when the Minister for Technology, Research, and Higher Education, Muhammad Nasir, declared that LGBT people “should be banned from entering university campuses” because they are corrupting students’ morals.

Many others quickly followed suit, despite Nasir half-heartedly clarifying his earlier comments via a 15-tweet Twitter ramble, in which he said that LGBT people indeed had rights but that the country wasn’t going to legitimise them.

The issue first appeared when it came to the Minister’s attention that an organisation at the University of Indonesia (UI) — the Support Group and Resource Center on Sexuality Studies (SGRC) — was handing out leaflets on campus. The group, which offers counseling for LGBT students, doesn’t deny doing so, but the Minister and many others seem to think that SGRC is encouraging people to become LGBT rather than simply providing support for gay, lesbian, bisexual and transgender students.

Minister Nasir’s made comments saw others quickly jump in to agree with him. Supporters include members of the Islamist Prosperous Justice Party (PKS) — one of whom, Nasir Djamil, said “the LGBT community should not be allowed to grow or be given room to conduct its activities. Even more serious is those LGBT members who go into universities with scientific studies, or hold discussion groups.”

Another is the head of the MPR, Indonesia’s legislative branch of parliament, Zulkifli Hasan, who said that “[LGBT] is not appropriate for our culture. It must be forbidden because it is not right for Indonesian culture.”

So far, so normal.

But, I was disappointed to see the otherwise-excellent Mayor of Bandung, Ridwan Kamil, recently quoted as saying that Indonesia is an ‘Eastern’ country that cannot become like ‘Western’ countries that have legalised homosexuality, because ‘Eastern’ values and norms are different. (Maybe he hasn’t read the news about Vietnam permitting same-sex marriage recently.)

Kamil added, “We live in Indonesia, where Pancasila is the foundation of the nation. There are norms that cannot be violated. Even if you have a certain sexual preference, you cannot expose [that preference] or conduct campaigns [supporting] norms that are not acceptable in Indonesia.”

The Mayor of Bandung says he hopes Bandung will not face these sorts of problems, and that he’ll be introducing evening prayer and education programs in 2016 that aim to ensure that the people of the city have a “religious, Sundanese, nationalistic, and environmentally-friendly” character.

Which is all very confusing, because there is nothing about being LGBT that prevents someone from being religious, Sundanese, nationalistic, or environmentally-friendly. And more crucially, there is nothing in Indonesia’s Pancasila principles that forbid different sexual orientations or gender identity expressions.

The Pancasila requires that Indonesians support five things: a belief in one God; a just and civilised society; the unity of Indonesia; democracy; and social justice for all. None of these principles are incompatible with being LGBT — one can even be LGBT and still be religious, although it’s undeniably a hard journey.

So just what is Ridwan Kamil getting at? A quick Google search indicates that many others also believe that LGBT people violate the principles of Pancasila, including MUI (Indonesia’s Council of Islamic Leaders) and KAMMI (Indonesia’s biggest Muslim students’ action group), although no-one quite explains what the link is.

My best guess is that many people believe that being LGBT and being religious is a contradiction. Religion is, after all, one of the key points of the Pancasila. While I personally struggle to understand how people remain faithful when their religions try so hard to reject them and push them out, many people manage it nonetheless.

It should be understood, however, that the ‘belief in one God’ principle is simply that. All Indonesians must believe in God. And while this principle in itself is concerning, as it violates the rights of atheists, agnostics, polytheists, and animists, that’s a debate for another day. If you follow Pancasila as it is actually written, the issue here is not whether one follows the ‘correct’ type of Islam/Christianity/etc, but whether one believes in God or not. And there is certainly nothing stopping people believing in God but also being in a relationship with someone of the same sex.

In fact, reading Pancasila in full indicates that, if anything, it supports justice for LGBT people. Pancasila is about living in harmony, both with God and with other human beings. It is about respecting each other, the choices we all make, and the lives we all lead. It is about human rights, democracy, and social justice. It is about achieving social welfare for all.

If this is what Pancasila is really about, then how can LGBT people possibly be in violation of its principles? I suspect that in this case, Pancasila is simply being used as a tool to justify discrimination and hate. By saying that the principles are not in alignment with LGBT ‘norms’ or ‘morals’, people are able to hide behind Pancasila and use it to defend their opinions.

My friend Mario Rustan summed it up best when he said: “Pancasila can become whatever you want it to be.” Perhaps that’s the whole point of Pancasila — it’s a wide-reaching yet flexible set of principles that help people live the best lives possible.

Sukarno designed Pancasila this way, after all, as a tool to help Indonesia’s wide range of different religions, cultures, and ethnicities live together in harmony. Unity in diversity, as Indonesia’s national motto goes. This is what Pancasila is supposed to achieve.

It’s just a shame that some people don’t seem to understand that.