Much has been said of the abundance of hate posts on Burmese language Facebook nodes. While this is a disturbing trend, moderate voices are not hard to find. Unfortunately, multimedia advocating peace and tolerance is less likely to make news, both in Burma and globally. Below are some samples of recent posts circulating on Burmese Facebook accounts that attempt to counter the violent and divisive rhetoric. This cartoon includes the declaration:

‘All of us love our country. Let’s prevent the problems that are happening. Don’t make disagreements out of different beliefs. Leave people who want to go back to an earlier era so we will move on.’ This is a joint announcement from Buddhist and Muslim youth groups wanting peace. It is in response to leaflets being distributed in Yangon attempting to incite religious violence. The concluding paragraph calls for unity: ‘No matter who divides us, we will not be separated. We will always be united.’ They go on to urge people to take responsibility and prevent violence from happening in the community. This is a joint statement from a Yangon-based group of monks and a national Burmese Islamic organisation, calling for a peaceful solution to the conflict. They make three points:

‘1. Based on the conflict currently happening in some parts of Rakhine State, the populace is worried and saddened by the suffering of innocent people.

2. We wish that anyone who acts, speaks and writes does so for peace.

3. Buddhists and Muslims should act according to the teachings of your respective religions and we beg you to join and work together to solve the problem.’ In contrast to the religious outpourings, the sectarian violence has also led some to advocate for secularism, as demonstrated by the pie chart above. 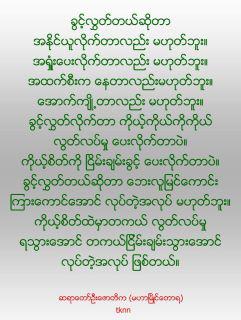 The above words from the prominent Buddhist monk and prolific writer U Zawtika contains some thoughts on forgiveness important at this time:

A nugget from Ghandi