War and politics, in Burmese 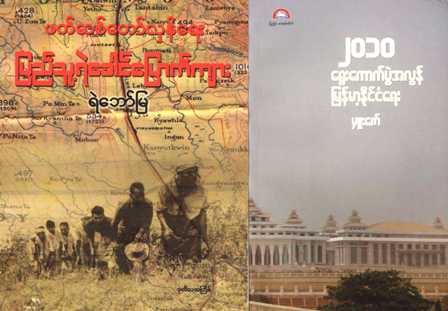 More and more former Tatmadaw officers are publishing memoirs, and in November the National Library of Australia catalogued a number of new titles from ex-soldiers turned aspiring writers.

Among them is the autobiography of former commerce minister in the State Law and Order Restoration Council, Lt-Gen. Tun Kyi. Peculiarly, the book has no contents page and omits details on the officer’s life that would be found in a conventional biographic work, but it does contain a lot of material on training and other institutional aspects of the armed forces in Myanmar before his removal from office in 1997.

For readers with an interest in army operations and politics in the Ne Win years, there’s a better organized book by Col. Tint Swe, and for those keen to learn more about counterinsurgency operations in the border regions adjacent to China, there’s another by Major Tint Wai Aye (pen name Ko Ko Aye). There’s also the second edition of Yebaw Mya’s book on guerilla force resistance during the Second World War.

With the November 7 elections over and Aung San Suu Kyi again attracting crowds at home and global interest abroad, there’s growing interest in the future of government and politics in Myanmar. Authors who published books prior to the elections sketching out possible scenarios and exploring the language and concepts of political science include those with the pen names Hmu Zaw and Aung Htut. The books of both men consist of articles compiled from weekly news journals, the first from the Yangon Times; the second from The Voice, of which Aung Htut, a.k.a. Ne Win Maung, is chief executive.

Also catalogued during the month, a new title on rivers and dams, and another on the history and practice of the great Southeast Asian round ball game: takraw, or, as it is known in Burmese, chinlon. For students of Burmese language and literature, there’s a useful bibliography of doctoral theses passed by the literature department at Yangon University from 2000 to 2010, which includes the abstract of each thesis. And for anyone with an interest in local government, there’s a recent book on the history of municipalities and municipal laws and regulations.

Burmese-language readers can open this link to see a full list of new titles catalogued in November.