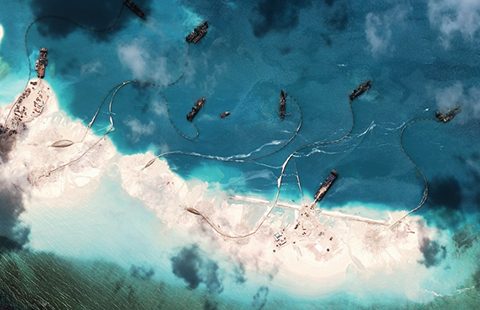 China’s claims and assertive moves in the South China Sea are putting ASEAN states on edge. But it need not be a case of history repeating and lead to major conflict.

Mounting antagonism in the South China Sea has provoked crisscrossing air and naval jousting on the high waters as well as legal battles in international courts.

China’s increasing assertiveness in territorial waters claimed by ASEAN states have not only cause increased “tensions” in the region, but led observers to wonder if China’s peaceful rise has given way to a new era of great power conflict.

Many scholars have pointed to past precedent and wondered if China’s reemergence as a major power threatens the security architecture and global norms put in place by the United States that has preserved peace in Asia since the end of World War II.

Nearly 2,500 years ago, the rise of Athens led to war with Sparta in the Aegean Sea.

Sparta, leader of the Peloponnesian League, felt a rising Athens threatened stability on the Aegean and launched a war to prevent Athenian dominance. By the end of the nearly three decade conflict, Sparta had subdued Athens, laying waste to the Athenian Empire and ushering in the end of the Greek golden age. Thucydides’ account of the Peloponnesian War outlines the risks posed when a rising power challenges a ruling power.

The South China Sea dispute serves as a litmus test for what Harvard political scientist Graham Allison has called the “Thucydides trap.” Whether China’s rise will inevitably lead to war between major powers is an open question, but Beijing has definitely ratcheted up the tension with deliberate expansion policies.

In May 2014 China deployed an oil rig within 200 nautical miles of Vietnam’s coast and reportedly rammed Vietnamese coast guard vessels. In February this year, the Philippines Foreign Ministry accused Chinese ships of ramming Philippines fishing boats. The government in Manila has since filed its case with the International Court of Justice at The Hague, where arbitration is pending.

Enhanced satellite imagery has revealed massive dredging and reconstruction of underwater rocks and tiny islands by China across the South China Sea – what some have labeled the Great Wall of Sand.

While awareness of the conflicting claims and recent clashes has grown among the international public, most casual observers give the South China Sea short shrift given its looming great game competition for resources and influence.

The South China Sea is believed to hold over 100 billion cubic meters of natural gas and 28 billion barrels of oil. The region possesses strategic passageways vital to international trade, such as the Strait of Malacca, through which 14 million barrels of crude oil pass every day. Control of sea lanes grants economic clout, security, and lasting prosperity.

China’s rise, which Beijing’s leaders have previously struggled to assert is peaceful and nonthreatening, has not led to outright conflict between major powers. Now, its increasingly provocative actions are worrying international observers and leading outside powers (Japan and the United States) to reassess the need for stabilising forces in the region, while minor powers seek to build stronger relations with the US, which maintains a hegemonic presence in the Pacific.

Patrick Cronin of the Center for New American Security explains that “the primary competition in the South China Sea is rooted in a reemerging China’s capacity and desire for expanding influence over its neighbours and adjacent waters.”

Just as Athens sought to wage minor skirmishes to gain a foothold in the Aegean more than 2000 years ago, China aims to enlarge its sphere of influence and control in the South China Sea, commensurate (in its view) with its status as a great power.

Beijing’s desire to retake hegemony over regional waters is understandable, and not without precedent. In 1823, President James Monroe declared that the United States would unilaterally regard any incursion in North or South American waters by outside (European) nations as a deliberate act of aggression, and that the US would be forced to respond in kind. The Monroe Doctrine served as a de facto declaration of US hegemony over regional waters.

Yet China’s assertiveness in the South China Sea is different for several reasons.

For one, the Americas of the early 19th century comprised a far smaller portion of the global economy. The South China Sea today accounts for one third of global trade, with about 7.2 million barrels of crude oil imported to China per day (slightly more than the US at 7.08 million barrels a day).

Secondly, a huge geographic distance separated America from its rivals across the ocean, colonial Great Britain and Spain. The South China Sea and East China Sea are home to US and Japanese forces as well as the modern navies of the Philippines, Vietnam, and other fledgling states.

Thirdly, as Cronin argues, geopolitics today operate on international rules and legal norms far more than spheres of influence that were more prevalent in the 19th century.

Just as the rising power Athens threatened the security architecture of the ruling power Sparta and its Peloponnesian League, today the rise of China manifests a real threat to the stability enshrined by the rules-based international order led by the US and its alliances with Japan, the Philippines, and South Korea.

Any escalation of armed conflict on the South China Sea would have grave negative repercussions for international trade and likely see a spike in oil prices. Such instability could trigger another global recession, or worse, war between the two superpowers.

While realists may cite the Thucydides Trap as evidence of unavoidable conflict between China, the US, and ASEAN states, optimists and pragmatists are working hard to increase dialogue and understanding through confidence building measures and advocating for peaceful dispute settlement mechanisms.

The US could ratify the UN Convention on the Law of the Sea to signal a genuine interest in submitting to international law and rules-based solutions to resolve the dispute. Such a move might relieve apprehensions across the Pacific of a U.S. policy to contain China.

Finally, history may repeat itself, but it need not preordain disaster, as modern readers of Thucydides may warn. We can learn from the mistakes of our past, and China and the US may be able to work together to find a “new model of great power relations,” which Chinese President Xi Jinping has called for.

The balance of power isn’t necessarily a zero-sum game. The future may hold room for competition amid cooperation between major powers, without ruling out minor confrontations and adjustments to existing alliances.

Hunter Marston is a freelance Asia analyst based in Washington, DC. He holds a MA in International Studies from the University of Washington in Seattle.