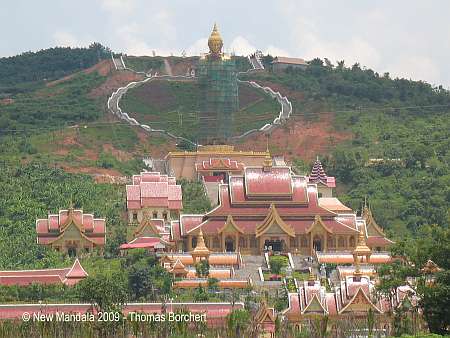 In November 2007, Roger Casas sent in a report on the dedication of a new central temple outside of Jing Hong in Sipsongpanna. Roger introduced this temple and its dedication as something of a compromise between the desires of the local government to develop its “tourist industrial complex” and the desires of the local Sangha to expand its educational capacity (and also one suspects to have a big showy temple not unlike their colleagues in larger cities in China). The funding for this temple, as Roger reported, came from a Liaoning real estate company, who in return would be given the opportunity to run the temple for at least five decades. I was in Jing Hong in mid-June of this year, and thought that some New Mandala readers might be interested in a brief follow-up report over how this compromise might be working out.

To be succinct, not very well, at least not from the point of view of the monks or the local Dai-lue population.

I visited this temple during its construction and at the dedication as well, and most of the people that I talked with in 2007 were filled with a great deal of excitement over its construction. Dai folks that I met on the street, particularly during the festivities surrounding its dedication, commented to me that this would be “their” temple (it is sometimes referred to as wat long meuang lue). Yet even at this point there was some trepidation over the temple’s future. A huge number of people attended the second day of the dedication (as Roger reported) to both make merit and see the completed temple. Almost all the Dai that I talked to that day reported that they had come to see the temple because they were certain that once the celebrations were over they would have to pay admission to enter the temple. This was curious, I thought, because in the contract signed by the local Buddhist Association with the “donor” (ie the Liaoning real estate company), it was specified very clearly that the Dai and other local Buddhists such as the Bulang would not have to pay to enter the temple. I understand that this part of the deal been upheld, but only just barely. Apparently folks claiming to be Dai-lue are often required to produce their national identity cards (which lists their nationality) in order to receive free admission. Most of them don’t carry these cards with them and so getting in has become something of a chore for the local Dai population.

It’s perhaps for this reason that on the days that I visited the temple, it was essentially empty of all but Chinese tourists. While the wat is not quite the “Dai Disneyland” that Grant Evans referred to in 2001 (a phenomenon one can see in various minority parks around the city), it is not far off. It is a place filled with ersatz Dai-ness. Tourguides of various ethnicities dressed in “traditional” Dai clothing take Chinese tourists around, explaining the complexities of “Hinayana” Buddhism both in its Buddha images and its notions of making merit. These tourists can buy candles for making merit or coins for putting in the bowls of the stone “arahants” who line the mountain behind the viharn which leads to the 40 meter walking Buddha image (still under construction) from other men and women marked as Dai solely by their clothing. The grounds are filled with the sound of monks chanting in Pali at all times of day, provided by speakers hidden behind bushes around the complex. Perhaps the greatest (and most offensive) moment of this faux Dainess is in the viharn where young Han men dressed in formal Dai outfits help the tourguides show the Han tourists how to pay respect to the image like Dai people do and then lead them to the stand where they can buy Buddhist trinkets. (I was unable to take a picture of this little operation because every time I pulled out my camera, a security guard would come over and tell me to put it away). I was told by some of the monks in the Buddhist Association that for a while the company running the operation was dressing young men up as monks in order to have them bless the tourists!

Indeed, I was told by a friend who is also a Dai tourguide that the Dai people don’t consider it to be a Dai temple.

So what are we to make of what is happening at the temple and the fact that portions of the local Dai-lue population do not consider this to be legitimately “their” temple? It is, I think, too early to declare this temple a lost cause for the Dai-lue people of Sipsongpanna. Chinese armies in the late imperial period would occupy Jing Hong for as much as several decades before getting chased out by malaria; it is only fifty years that the temple will be run by Chinese firms. It is also possible that the Sangha will be able to reassert more authority over the place. The monks of Sipsongpanna after all have been relatively adept over the years at fostering productive relations with the local government. Nonetheless, only time will tell if the deal to get this temple built was made with the devil or not.