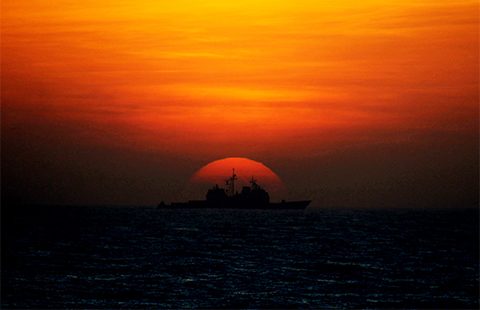 As China seems to island-hop its way across the South China Sea, should Australia be concerned about Beijing’s land reclamation activities?

And should we be encouraging the US to take a tougher line, including so-called ‘freedom of navigation’ patrols close to the artificial islands China has constructed?

It depends on how much you believe the hype.

There are several misconceptions, some of them dangerous, in current Australian discourse concerning the South China Sea and China’s increasingly assertive place in it.

The first of these is that the building of islands amounts to “annexation.” Under international law islands are natural features, not artificial. Therefore, sovereignty under maritime law does not arise from building features at sea and inhabiting them. China can build as many islands as it likes, but they will not strengthen its claims to sovereignty over the South China Sea.

The second misconception is that ASEAN countries are doing “nothing” in relation to China’s actions. In fact, ASEAN states are acting largely in accordance with what Australian and US governments have been prescribing for several years now: seeking to resolve their disputes with China in the South China Sea peacefully and in accordance with international law.

This is why in 2014 the Philippines submitted a suit to the Permanent Court of Arbitration in the Hague arguing that China’s nine-dash claim for the South China Sea was invalid. This is why Vietnam and Malaysia have made submissions to the UN Commission on the Limits of the Continental Shelf (CLCS) to demarcate their Exclusive Economic Zones in the South China Sea legally.

It is also why ASEAN continues to publicly condemn China’s actions, most recently at the iApril 2015 Summit where it stated that China’s land reclamation would “erode trust and confidence” in the region.

If Australian commentators and policy elites believe this to be “nothing”, then it would appear to reveal a hollowness in our repeated calls for peaceful resolution according to international law.

The Australian public deserves a far more informed and nuanced discussion on the extremely complex issues at play in the South China Sea, rather than the simplistic depictions of a belligerent hegemon on rampage, requiring the intervention of the global sheriff and its loyal deputy.

This would emphasise that while the current situation is tense and unacceptable, it could also be a lot worse. In March 1988 open conflict between China and Vietnam claimed 60 lives. In January 1974, China used force to evict South Vietnam from the Paracels.

Incidents of the last few years, have involved ramming, use of water cannon, and other acts of non-lethal violence. This ‘cold violence’ is not attractive but it is less concerning than what occurred in the past. Artificial islands won’t back Chinese claims for sovereignty in the South China Sea.

Sensible analysis would also emphasise that China could have no conceivable interest in obstructing maritime trade, as its overwhelming reliance on ship-borne oil from the Middle East attests. It would also note that progress can and does occur, such as China and Vietnam’s 2000 agreement on their maritime border in the Gulf of Tonkin.

It would note that some issues in the South China Sea arise from different conceptions of what is appropriate anmd lawful in other country’s EEZ. Some US surveillance operations near to China’s coastline are unacceptable to many countries, even Australia.

Finally, it would recognise that China’s leadership, having nourished a narrative of national victimhood over many years, is now more subject to public opinion, much of it nationalistic. China needs to play to these domestic forces, as was evident in its recent grandiose parades of military hardware for its recent 70th anniversary WW2 celebrations.

This doesn’t mean China’s actions are acceptable. But it does mean we should be careful how we interpret China’s intentions.

Joint ‘freedom of navigation’ patrols
With the Xi Jinping – Barack Obama meeting out of the way, media reports suggest that the US may seek partners, including Australia, for joint ‘freedom of navigation’ patrols within 12 nautical miles of China’s artificial islands. This would demonstrate that the US and others do not recognise any sovereignty arising from the artificial islands.

The rationale here is that China does not understand any language except that of force and that it will continue to test the boundaries of acceptable behaviour until its costs are raised. If nothing is done land reclamation activities may ultimately provide China with the physical and logistical means to enforce its claims by force.

This might include declaring an Air Defence Identification Zone (ADIZ), such as it did recently in the East China Sea. But joint patrols are not a proportionate response to land reclamation, and more importantly, would not constitute the basis or part of a sound, sustainable long-term strategy.

Patrols would be a very tangible expression of Australia’s concerns and its legitimate interests in freedom of navigation. But they are inconsistent with the risks posed by the land reclamation activities.

While it is possible China’s negotiation position would be improved by the land reclamation, China will not gain sovereignty by building islands. And its ADIZ in the East China Sea has proven to be toothless, with many states including the US and Japan continuing to ignore it.

Instead, patrols would carry risks of escalation, and an unfortunate message. In terms of risks, an unintended collision or incident between Chinese and a foreign military vessel could escalate to use of force. Local use of force at the incident could intensify further to a broader US-China conflict. Although this is unlikely, it is possible, and the consequences unimaginable.

The unfortunate message is that the regional forums and architecture, including the East Asia Summit and the ASEAN Regional Forum, that have been built over many years with great effort and with the expectation that they can solve regional disputes, can be bypassed with impunity if the US and Australia so deem. Freedom of navigation patrols send the wrong message and could cause escalation. Photo: US Navy/Wikimedia commons

Multilateral structures like the East Asia Summit are central to a vision of a rules-based regional order in East Asia. While European Union-style integration and norms of non-violence and peaceful dispute resolution are light-years away in the Asia Pacific with its historical fault lines, this goal has been central to Australian diplomacy since the end of the Cold War.

Whether our actions support or detract from this long-term end state should be a test of their value.

There are other approaches that better support this goal. These would simultaneously reinforce to China the unacceptability of its activities, force it to negotiate and strengthen a rules and international-law based regional order. Most importantly, they are based on diplomacy.

These approaches would emulate Angela Merkel’s approach towards Russia’s Crimean annexation and East Ukraine subversion, in which Russian costs are raised and strong messages being conveyed without resort to use of force. Indeed it would emulate ASEAN’s approach to Vietnam’s invasion of Cambodia in 1979, in which a decade’s worth of continual censure and diplomatic isolation finally brought Vietnamese withdrawal.

Diplomatic strategies in our region come back to ASEAN, which has been central to norm-building in the Asia Pacific, and the core of our regional multilateral architecture. Australia’s diplomats are reported to lament ASEAN as insufficiently unified and not making sufficient progress on a Code of Conduct for the South China Sea. But to what extent has Australia proactively advocated innovative diplomatic strategies in the South China Sea?

A number of prominent academics have proposed ideas. Vietnam expert Carl Thayer has suggested that one way for ASEAN countries to work out their own differences and a unified position on the South China Sea would be through the negotiation of a Treaty of Amity and Cooperation in Southeast Asia’s Maritime Domain. Once this Treaty had been signed by ASEAN members, outside parties such as China could be invited to sign, or risk isolation.

This approach would use collective bargaining power and social costs, rather than military force, to shape China’s behaviour. Economic measures including sanctions, while difficult to devise for an economy with the size and centrality of China’s, also need to be explored.

Orientalist concepts of a passive and ineffectual ASEAN are outdated. Australia needs to work with ASEAN not around or over the top of it.

Of course Australia and its partners needs to have plans and forces able to do more. If China began to take over South China Sea islands by force or attempted to interfere with international overflight or shipping, these would constitute a different level of seriousness altogether. It is to be hoped that these actions are not in the minds of China’s rulers.

But as it stands there is insufficient evidence suggesting this is the case.

Greg Raymond is a research associate at the Coral Bell School of Asia Pacific Affairs, the Australian National University.