Now in this game of smoke and mirrors every side paints their own picture of what happened on 7 October 2008.

In this post I will try to describe what I saw, and how I felt about what was happening. I do not have any sense of an overview, and nor do I claim to. I was only there from 5.00 am to 11.00 pm, with a short interruption at midday, and from 1.00 pm to 4.00 pm to file some images, and close my eyes for 30 minutes. I could not have possibly been everywhere at the same time. It was generally not possible to know what was going on even 100 meters away.

The attack by police started at about 6.00 am. At the time I was in the area held by the People’s Alliance for Democracy (PAD). As soon as I saw the police forming for an attack I left that area and placed myself at the front of the police lines. I felt safer there because I knew that in order to disperse the protesters heavy force would be deployed.

Police had one of their loudspeaker lorries and first issued a warning that protesters should disperse as they would be attacked, and teargas would be fired. Police constantly mentioned that in this conflict nobody could possibly win, that they were all Thais, and should not fight each other.

The protesters did not disperse and soon after the attack started with a barrage of teargas grenades. It started from both Ratchawithi Rd. and Pichai Rd. (where I was). I saw teargas grenades blowing up with strong explosive power when they got caught in the tires of the barricades. Some tires even flew a few feet into the air. Protesters quickly ran off, and I followed police in just after the first lines. There was a bit of hand to hand fighting, nothing too severe, a few handheld teargas grenades were thrown (I guess so, I am not an expert on such things) by police. Also the few remaining PAD protesters threw some explosives, maybe firecrackers or their own ping pong bombs. In all the rush and the smoke it was very difficult to see exactly what was going on; biting teargas blinded nearly everyone. Also very few police officers had proper masks, and were just as affected. During all the time the loudspeaker from the police asked protesters to stop fighting. Soon after the protesters stopped, and sat down on the road, and police achieved their goal of opening the gate.

WARNING: The next picture is graphic and may disturb some readers. Soon ambulances picked him and the other injured people up. In Government House was an injured radio journalist, his back partly exposed, bleeding and heavily burned. A Border Patrol Police officer comforted him. Things then calmed down. I spoke with several police officers over the injuries. They were all shocked. The grenade squad explained that under certain circumstances the grenades can have high explosive power; when, for example, people are tightly packed close to each other. I spent some time in the area, sat in the Parliament building, and then went to the Rathchawithi/Samsen crossing, where PAD had gathered by this time.

After a while, maybe at around 10.00 am, I went to Metropolitan Police headquarters, just around the corner from the Royal Plaza. Just as I arrived, PAD staged an attack. They had thrown ping pong bomblets (maybe teargas) into the compound and at police. A barrage of iron balls and marbles were fired by slingshots. At one point a short burst of what I believe were bullets passed around me (the noise of the projectiles passing was very different from the slingshot projectiles). I hid behind a car, and was hit by a steel ball in the stomach while I phoned Nirmal Gosh from the The Straits Times. Teargas was also fired by police.

In a short lull I followed the retreating police into the Metropolitan Police compound. Things then stayed quite, and soon I left for home to file images. By that time the police had given up the area around parliament to the PAD. In the afternoon, I got a call that hostilities had broken out again, when police had to reopen the door to Parliament at Rathchawithi Rd. I came from Ruamchit Rd., and straight away I was caught up with PAD under a barrage of police fired teargas grenades, trying to repel a PAD attack. One of those grenades landed maybe a meter or so away from me while I ran, and exploded with a tremendous noise. I finally made it through the lines to the crossing held by police (one grenade was fired at me when police mistook me as a protester, but stopped after I managed to repeatedly shout that I was a journalist, and held up my camera). I spent until nightfall at that corner. Police had to protect this corner to allow civil servants, employees and MPs to leave Parliament. The crossing was under constant attack, iron balls and marbles were fired from slingshots, and police repelled attacks by firing tear gas grenades. At times at the corner projectiles were fired at the police from the Ratchawat Institute as well. The police asked PAD hiding in surrounding buildings to leave. They shouted that they would do nothing to departing protesters, and I saw several that came out and were left alone by police. A surreal situation was when a friend of mine – a Special Branch Agent under cover with the PAD – also came out of one of those buildings. 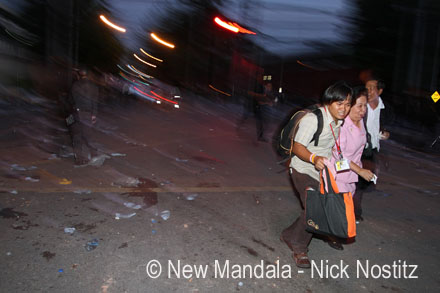 Later, the situation was incredibly tense. Teargas grenades went off all the time; there and around the corner near the main entrance to Parliament. At one time PAD started to drive a lorry towards police at Ruamchit Rd., Police hurriedly erected a few barricades and fired teargas grenades directly at the lorry. Just in time it could be stopped, and taken by police. I have photographed a police officer who got injured when PAD, after firing handguns around the corner at parliament building, and was run over by someone in a purposely aimed pickup truck.

Tales came out of Parliament that PAD shot three police officers, they were in the Parliament building, and PAD refused to allow ambulances in.

During all the time people came running along the crossing from Parliament, escaping the area.

At nightfall, when this corner finally calmed down, I went to Metropolitan Police headquarters, which came under constant attack by the PAD. Police used teargas, PAD slingshots, constant clacking of the projectiles at police shields and the pavement. This time fortunately I was not hit. Apparently occasionally guns were fired by PAD as well, yet I can’t say for sure. It was very scary, several other attempts by cars and lorries driving towards the barricades were repelled. At one point there were one or two more protesters with severed legs, but I missed seeing them myself. I have only seen the pictures by one local photographer.

And, like before, things calmed down a bit, only to start again. At one point police were finally able to retake the barricades at the corner of Royal Plaza. There was a pickup truck stranded that tried to drive into police. Police pulled out two people from the back, and roughed them up a bit. Another injured woman was folded over there on the street. There were picked up by military medics. Then an army Humvee drove by to observe the situation. It stopped briefly at the police lines, and continued to Royal Plaza. 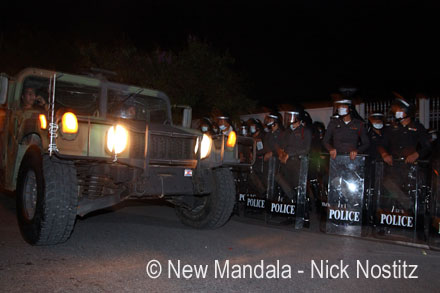 Things started to be under more control from about 10.00 pm. PAD had much smaller numbers, mostly young people. After a while a man in combat camouflage, an active or retired soldier on the side of PAD, came to the barbed wire and briefly negotiated with police. Things stayed calm from the on, only a hundred or so PAD were visible at Royal Plaza. I went home.

There is now a discussion about excessive force by police, and of course the use of teargas. From what I saw, I believe that the police had no other choice. Blame it on the miserable police budget that they had no less lethal teargas grenades, but not on the police officers on the ground that day. Police had to do with what they had available and that, in this case, was only equipment from Russia.

Were the injuries caused by explosives carried by PAD? I honestly have no idea. I only know that some PAD protesters were throwing explosives.

In this showdown PAD has used lethal force and if the police did not use teargas then this situation would have degenerated to hand-to-hand combat. And that, I am sure, would have cost many people their lives, on both sides. PAD had a few handguns, one or two police officers have been stabbed by flag poles. So, one would not like to imagine what would have happened if there was not the distance between the sides created by the teargas grenades. I doubt that any police officer intended to maim anybody but this day was a day of very few choices.

What some people seem to forget is the basic situation: the law was with the police, and not with the PAD.