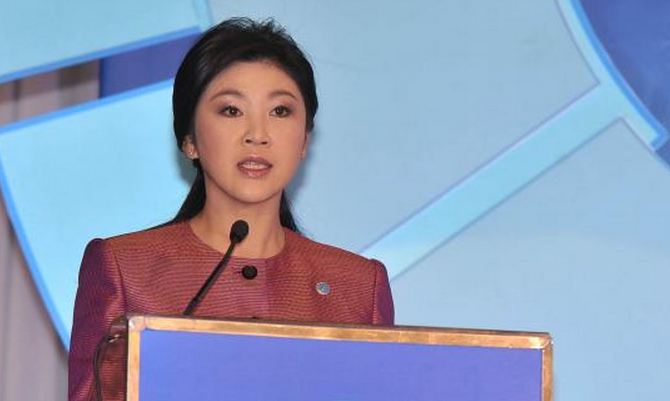 There has been a great deal happening since Yingluck’s landmark speech in Mongolia. Red Shirts are indicating that the PM is now alerting the international community that events may happen in Thailand in the near future –based on the consequences of the 2006 coup and the fate of electoral democracy.

Yingluck’s speech was written by her alone (despite opposition claims of someone else in the family) on the plane to Ulan Bator together with her Department of Foreign Affairs speech writer whom she instructed to include mention of the 91 people killed by the army/regime in 2010. The Democrat Party (currently split over reform issues) are trying to manipulate her speech as somewhat subversive, as are the ultra right wing media (in the guise of post-6 October 1976 liberals).

Yingluck says that she has been unable to work effectively due to the ramifications from the 2006 coup, especially those so-called independent bodies of anti-democracy fanatics that were emplaced after the coup which have crippled the capacity of her party or any future elected government to actually govern (in terms of constitutional, economic and policy reforms).

A number of points worth noting currently discussed in Red Shirt media:

1. The army, if a little confused about royal futures, are talking about a coup (yes, yet again) among themselves and many senior army officers (including Prayuth Chan-ocha) dropping strong hints in the media…

2. Nine Constitutional Court judges on 1 May 2013 ruled against amending Article 68[1] and indicated that this was indicative of an intent to overthrow the institution. Thus 312 MPs may be sacked if the judges get their way and liable for serious criminal charges. (The Constitutional Court is considered by the pro-democracy elements as the last weapon remaining of the aristocratic centre dominance /amaat or ancien régime). PTP may in fact still be dissolved because they proposed the constitutional amendments, while the PTP executives are likely to be charged accordingly.

3. The nine pro-yellow judges postponed and will continue to postpone any decision that Abhisit has done anything wrong in regard to avoiding conscription and events during his term in office and therefore keep his job as MP safe. Earlier judgement on 2008 airport yellow shirt protesters who virtually crippled the nation also (of course) postponed. Meanwhile PTP list MP Korkaew Pikulthong, bail revoked, is sent back to prison and, because he “insulted” the integrity of the court, is likely to have a lengthy sentence.

4. UDD core leaders agree to join with the Community Radio Network leaders outside the Constitutional Court. If the leaders are arrested then there will be revolt. This is the first time we see an element of civil society, treated so appallingly during Abhisit/army period, functioning autonomously and now has the support of UDD and PTP executive. They have given the judges unto 8 May to quit. The pressure may also turn to ridding of the amaat/military emplaced independent bodies. Community Radio Network leaders call for support from the provinces.

5. PAD continues to come out with attempts, largely through a complicit mainstream media, to discredit and eventually overthrow the current elected government. Together with their ideological partners in the Democrat Party seek to sack Yingluck and impose a five year ban on her from politics over the issue of the two trillion baht loan for infrastructure development. The main concern by opposition is this will commit government funding (to whoever comes into power later) and takes out the opportunity for corruption which is gained typically on the financing of government contracts and the issuance of tenders.

6. Red Shirts are now supposedly prepared and largely unified after the Yingluck key note speech and waiting for the situation to “ripen” before the movement considers its next move. Many feel that whatever happens the 8 May will be a turning point, unless the nine judges, considered corrupt /politically biased, resign and the last (rather ambiguous) Constitutional Article 309[2] taken out (this effectively makes unconstitutional any possibilities for constitutional changes to the military-amaat written 2007 Constitution). The 2007 Constitution is regarded by many as a howler overall: replete with syntactic ambiguity, vagueness and just plain deliberate confusion where working in ambiguity serves a political purpose.