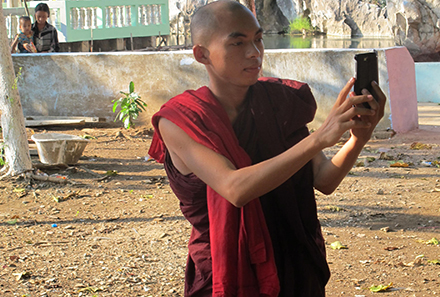 A young monk and smart phone. Photo by Belinda Cranston.

After a recent trip to the country, Belinda Cranston asks how much is really changing in Myanmar.

At the top of a rickety set of stairs, inside one of many worse-for-wear colonial-era buildings, wine glasses are being filled as tourists, academics, journalists, embassy workers and locals walk in on a jazz band winding up practice for an upcoming gig.

Shot around the Thai/Myanmar border while carrying out her PhD research in 2012, the film focuses on the experiences of young Burmese women in search of better lives in Thailand, only to be exploited because of their illegal status.

It’s the first time the film has been shown in public in Myanmar – up until 2011, when it established a quasi-civilian government, the former military junta would not have tolerated such a screening.

Now that the country is slowly transitioning from military dictatorship to democracy, it seems it’s okay to question the plight of its people.

During question time the crowd was relatively reticent, with a guest host making most of the remarks.

Then a local man who said he worked for a not-for-profit group rather bluntly asked for Dr Mar’s thoughts on what was needed to prevent women like those in her documentary from becoming prostitutes and succumbing to sexually transmitted diseases.

She welcomed the ‘criticism.’

I reserved my own questions for later – I was curious to know how recently a screening of Dr Mar’s film in central Yangon would have prompted an adverse reaction from authorities.

A journalist from the independent Burmese publication, The Irrawaddy, folded his arms and declined to comment when I quietly asked for his thoughts on what could and couldn’t be reported on, now that the media no longer had to submit their work for censorship before publication.

Days later, many of those who attended the screening were among the crowd at a world music festival at the Yangon-based Institut Francais and Goethe Institut. The festival included the band that had been practicing ahead of Dr Mar’s talk at Pansodan Gallery, along with musicians from Germany, Israel, Switzerland and France.

“Myanmar has been opening up to the world and the world is coming to Myanmar,” the master of ceremonies announced.

As beer flowed readily into plastic cups, the crowd, about half of which were foreign, retained the polite decorum of a Sydney Opera House audience.

Further south, in Mawlamyine, in Mon State, I was befriended by a few young men outside a bank. They wanted to share Western music clips with me that they had downloaded onto their smart phones.

Their taste included the likes of Taylor Swift and Chris Brown. Interestingly, they appeared to like blasts from the past like Bon Jovi, Savage Garden and Michael Learns to Rock just as much. Most people I spoke to during my November/December trip to Myanmar had only very recently acquired smart phones.

Formerly controlled by government-backed Myanmar Post and Telecommunication (MPT), up until a few years ago, ordinary folk simply couldn’t afford their own mobile phone.

Even tourists were resigned to doing without the technology, with SIM cards costing as much as US $1,500 three years ago.

That all changed in late 2014, when Norway’s Telenor and Qatar’s Orredoo began rolling out modern equipment, reducing the cost of a SIM card to as little as US $1.50.

In the first three weeks after its August launch, Ooredoo Myanmar sold one million SIM cards across Myanmar.

“A little over a year ago we committed to breaking down all the barriers that limited the people of Myanmar’s access to high quality voice calls and a fast internet experience,” Dr Nasser Marafih, Visiting Group CEO of Ooredoo, said in a statement.

“One of the many reasons we are excited to be here in this wonderful country is that we strongly believe everybody has the right to experience the life-enriching benefits of mobile technology and the Internet.”

The sheer number of shops selling the cards is testament to the demand – in the heart of Yangon, every third or so shop appears to sell mobile phones and related gizmos.

People have embraced the technology with as much enthusiasm as their Western counterparts – using the devices for checking Facebook posts to taking selfies to sending text messages. Opening up the telecommunications industry to foreign investment is perhaps the most visible sign Myanmar is embracing outside influences.

Other luxuries like takeaway fried chicken and expensive cosmetics are also being tested.

Last year KFC’s parent company, Yum! Brands, teamed up with a local company, with the aim of opening franchise stores across Myanmar in 2015.

2014 was also the year Myanmar hosted its first international beauty trade exhibition, allowing 58 companies from 11 countries to show their products.

Now brands like L’Oreal, Revlon, Maybelline, Shishedo, Joico, Clinique can be found in spas and beauty parlours, while a beaming woman with long, glossy hair and Sunsilk branding is plastered on billboards everywhere.

It remains to be seen whether fast food options from the West, along with perceptions of what defines beauty, will alter their lifestyle habits.

Belinda Cranston is a journalist, and writer based at The Australian National University’s College of Asia and the Pacific. She toured Myanmar in November and December 2014.