When in doubt, wear red

“When in doubt, wear red”: The Red Sunday show at Ratchaprasong, January 9, 2010

As part of my continuing project on English in Thai politics generally (here, here and here) and redshirt signs and art, I took my camera down to Ratchaprasong for the big redshirt show on January 9, 2010.

The first thing that struck me as I got off the train at Chitlom station was that the BTS management was proudly sponsoring the event. This is a photo of the skytrain doors. As Bill Blass, doyen of New York’s fashion scene, says: And red was of course still the crowd favorite. This T-shirt design and cartoon was created by an artist from Lampang. A new and still optimistic slogan Designs in a choice of Asian languages – Thai, Japanese and Korean, I think. But is black becoming the new red? A “prai” and an automatic rifle and slingshot motif. Most new lines came in a choice of black or red. Men in black or mourning black? A complete ensemble. Pretty in red. 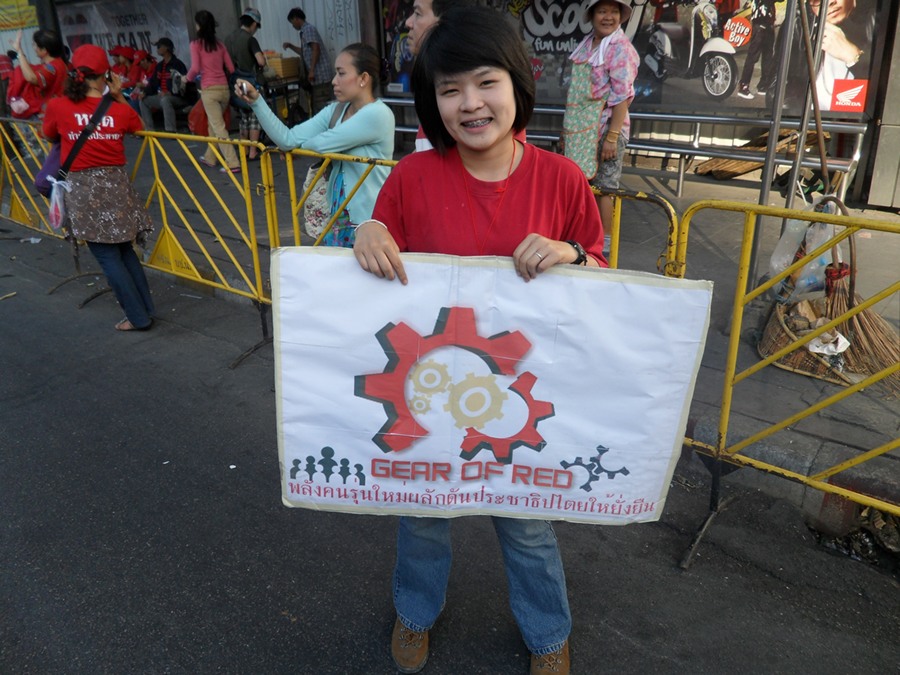 The accessories of choice were small hand-made signs like this … but this sign was survived from Phan Fa and Ratchaprasong last year. My friend Paul on the left who lives in Japan was speaking Japanese to the lady with the headband and finding out about her inspiration. All in all, it was a good day out with a friendly crowd who were enjoying themselves but with an underlying sense of commitment, determination, anger and strength, I felt.

And now a question for anyone who has been looking at other signs in last year’s demonstrations. S.P.Somtow, the Bangkok novelist and musician, wrote an entry on his blog last year called “Don’t blame Dan Rivers” that received a lot of response, most of it positive. In fact, his blog was picked up by The Nation and added to their list. He said that Western journalists such as Dan Rivers were gulled by Redshirt masterminds who played to a Western concept of history as “a series of liberations”. According to Somtow, the Redshirt story was a script written in simple English to appeal to the cultural biases of Western journalists who, because of their “ingrained sense of cultural superiority” swallowed the romantic but false story that the placards told of an oppressed proletariat rising up against an evil dictator. Somtow says:

The placards say “Democracy”, “No Violence,” “Stop killing innocent women and children” and so on. Speakers are passionately orating, crowds are moved. But there are no subtitles. What does it look like? The answer is obvious. It looks like oppressed masses demanding freedom from an evil dictator.

But, Somtow says, this is not the real story at all. It is a story of dupes and pawns, of treacherous and callous redshirt leaders, of the rightful government restoring order and an army that shot only in self-defence and killed no innocent women and children.

Quite a story. But despite trawling through web photos of the demonstrations for hours and taking my own photos of a few of them, I am still looking for the photo of a placard saying “Stop killing innocent women and children” (an appeal to Western chivalric values, no doubt) and am beginning to think that it is part of a script that Somtow is imagining, rather than a real sign that actually existed. It’s something that he thinks such a script ought to contain.

I have seen a sign saying “Stop kill people”. But nothing like this. So if anyone has seen this sign or something similar, I’d appreciate if they could let me know where to look.

Anyhow, maybe the Reds should have had such a sign. It might have appealed to the army’s sense of chivalry. Somtow wrote his piece on the 18th May. The shootings at the temple happened the next day. But of course the idea that the army willfully shot Nurse Kate and her fellow medics is no doubt just the romantic dream of befuddled Westerners barracking for the underdogs. It was obviously self-defence.