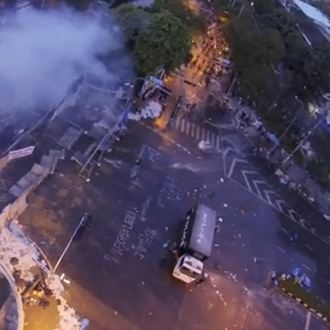 Who can stop the Thaksin system? 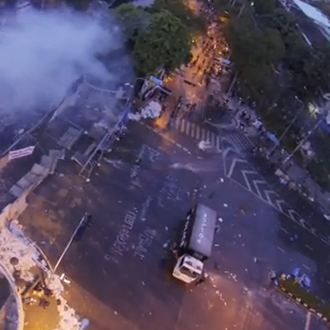 Earlier today when I was watching the incredible drone footage of Thai police drowning in their own tear gas, I noted some text painted on the ground in front of the barricades. It reads “р╕лр╕вр╕╕р╕Фр╕гр╕░р╕Ър╕нр╕Ър╕Чр╕▒р╕Бр╕йр╕┤р╕У” (see above). Simply, “stop the Thaksin system”.

As a summary of the sentiment that motivates many of the anti-government protestors I guess it’s pretty reasonable. They perceive systemic injustice, at the heart of Thai politics, as perpetrated by the election-winning juggernaut of the deposed former Prime Minister. They accuse him of corruption, human rights abuses, vote-buying, extrajudicial killings, selfishness, patronage. You all know the story.

Yet when you rattle off the “Thaksin” election wins — 2001, 2005, 2007, 2011 — and consider, for a moment, the obstacles in his way, it is incredible that his political project just won’t be stopped. Indeed over those four elections the Thai Rak Thai – People Power – Pheua Thai vote ranged from just under 40 percent (2007) to a whisker over 60 per cent (2005). These are unprecedented successes. Even with the problems faced by the administration of Yingluck Shinawatra it seems likely that the result of any 2014 or 2015 election would fall within this range.

So what do you do with the “Thaksin system”? Is it unstoppable? As has been suggested before, opponents of the system could develop an electorally attractive political platform as an alternative. They have failed.

Of course, the “Thaksin system”, as it is understood by its detractors, is now being confronted with renewed vigour. But the system’s core strength, which has always been at the ballot box, makes it hard to see a democratic alternative for Thaksin’s enemies. There’s always talk of a coup in these circumstances.

But what, let us consider, are the other options? A small minority of Thais, including some powerful figures, appear unwilling to countenance Thaksin’s return or rehabilitation.

So, imagine for a minute, you were tasked with coming up with a plan to stop the Thaksin system. If you were an anti-Thaksin strategist what would be your advice to the relevant powerbrokers?