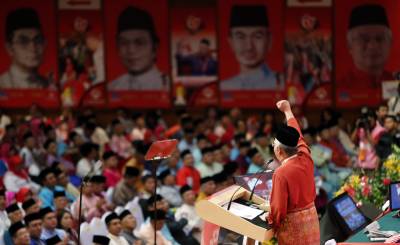 New Mandala readers maybe interested in several articles appearing over at the East Asia Forum ( EAF). One in particular, “UMNO divides Malaysia“, is of much interest.

In this article, Ahmad Fauzi Abdul Hamid, says it in possibly the most direct manner, that it is UMNO that divides Malaysia.

Rising politically via UMNO and its entrenched system of vested interests, Najib’s political survival depends on UMNO, whose apparent improvement in the 13th General Elections (GE13) of May 2013 has lulled its leaders and members alike into believing that continual UMNO hegemony could be best brought about by appealing to Malay ethnocentric sentiments.

Ahmad Fauzi concludes by noting that,

As greed multiplies, corruption and ill-gotten gains continue to mar Malaysia’s economy. Massive sums of money are unlawfully siphoned out of the country year in and year out, contributing to the downward rating of Malaysia’s creditworthiness. If all groups are treated as national stakeholders who deserve to be rewarded for hard work irrespective of political and ethno-religious affiliations, and readily accept precepts of One Malaysia out of sincere patriotism, one wonders whether the need exists at all to transfer wealth to safe havens abroad. Surely something is wrong somewhere with Najib’s whole national set-up, of which One Malaysia purportedly serves as an important pillar but looks more like a spent force today.

Ahmad Fauzi’s analysis is not surprising, but that these views are increasingly becoming mainstream and entrenched, (being published in blogs such as the East Asia Forum) surely does. It maybe the case, that the international community’s views on UMNO maybe changing.