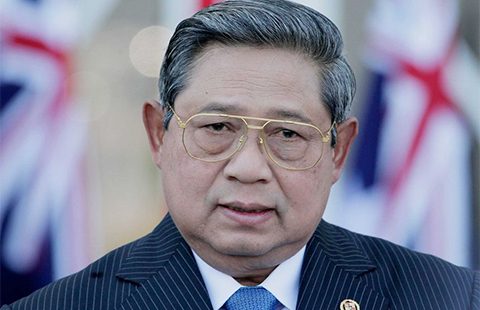 Why we still need SBY The private chat encouraged more optimism than SBY’s public speech a day later because participants believed their visitor was listening. The formal address was not a pathfinder and largely bypassed by the media.

Here was a chance to refill the tank with high-octane ideas so the coughing and spluttering vehicle carrying his nation and its neighbour into the future might find second gear. Sadly SBY missed the turn.

This is not to diminish the importance of the house-full event organised by the USAsia think tank, which has made SBY a senior fellow.

Anything said by the previous leader of the world’s third largest democracy deserves an audience. His 2010 speech to the Australian parliament as President encouraged belief that both nations could bond better. SBY scattered goodwill and we loved it, even if his past as a general in a brutal army made us feel a little queasy.

Since then much has gone sour. Australia bugged the phones of its “great friend” and his wife Kristiani – refusing to apologise for what former PM Tony Abbott called “reasonable intelligence-gathering operations.”

There were other insults, enough for a touchy guy to snub the island continent forever. That SBY has overlooked the contempts shows mettle – a quality Australians respect.

But while he’s scaled the high moral ground, he’s so far failed to capitalise on the achievement. It was the same in 2004 when directly elected with a majority above 60 per cent.

In those brief and blissful moments SBY had the people’s mandate to reform the judiciary, start repairing the nation’s crumbling and congested infrastructure, and reinforce the ideology of Bhinneka Tunggal Ika (Unity in Diversity) by respecting minority rights.

But he dithered, and the opportunities drowned two months later; a tsunami hit Aceh in North Sumatra and all energies rightly focused on recovery.

Now SBY has another chance.

He’s only 66, but already an eminence grise. He ruled for a decade without using the Army; Indonesia stayed intact while other Muslim-majority nations imploded; poverty was reduced on his watch and the economy strengthened.

He has a real doctorate, an Order of Australia and shirtfronts of international awards. He’s also a visiting professor at the University of Western Australia.

He speaks and even sings in English. Unlike his successor Joko (Jokowi) Widodo who is reported to be indifferent to foreign affairs and uncomfortable among diplomats, SBY is so cosmopolitan he probably knows the best nasi goreng in the world’s capitals.

Indonesian electors remember him as a pedestrian president, but overseas he has the gravitas absent in the current leader.

SBY used his Perth address to challenge the neighbours to rediscover each other, though news reports emphasised his comments on commerce.

Business is hugely important but canny traders don’t need a retired politician to chant the mantra that Indonesia is big and getting bigger, so more mouths to feed. Any entrepreneur unaware of this hard-set fact should start Googling Sits Vac.

If Indonesia hopes to lure more than the 265 Australian companies now in the archipelago (there are 360 in tiny Dubai, according to Trade Minister Andrew Robb) it must answer some blunt questions.

When will Indonesia develop a clear and stable policy on commodity imports? When can foreigners invest knowing disputes will be settled legally, fairly and openly? When will the corrosion of corruption be confronted with Singaporean resolve?

SBY is no longer leading man but he hasn’t left the stage. As head of the fading and graft-tainted Democratic Party he knows how the gears grind in Jakarta’s political machine.

This creates an advantage of contacts, and a problem of impartiality. Smart ex-leaders cut past ties to avoid the silent-phone curse that bedevils the power-famished, like Malaysia’s Mahathir Mohamad.

Likewise an important new role awaits SBY away from Jakarta – as an international relationships guidance counsellor. Where better than with Australia where the shouting matches are a constant concern?

SBY’s Perth speech spoke of more people-to-people exchanges, particularly students. Here he can do something; Australia is willing – more than 10,000 Indonesians are enrolled in secondary and tertiary education though few Australians have found the right visas to open their tablets in Indonesian tutorials. It seems Indonesian Immigration has a touch of xenophobia.

In the private meeting SBY was told that “some of Indonesia’s smartest young people should be invited to work in Australia with tech start-ups to create innovation jointly between our two countries. Indonesia has some brilliant young minds.”

A splendid idea, with a rider: “Australians need to understand Indonesia is not an enemy but rather a potential partner.” To change that perception the Republic has to remove a serious impediment – capital punishment.

For five of SBY’s 10 years in office he kept his nation on the right side of history. When the firing squads reloaded, three of the four victims were murderers.

In April, SBY abandoned a visit to Australia after drug traffickers were executed, citing a “disturbed relationship”. Foreign Minister Julie Bishop described his words as “gracious” and evidence of disquiet among Jakarta’s elite.

So SBY has some moral authority, though tarnished, to champion abolishment. Now he needs the courage to help Indonesia join the majority of nations that have freed themselves from the evils of primitive punishment.

There’s urgency here: further shootings are promised. If these go ahead the bullets will shred more than flesh. There’ll be deep wounds to reputation and relationships.

SBY might respectfully point that out to his successor using the most refined Kromo (high-level Javanese). From his vantage point SBY can see how judicial murder demeans a government, dashes down the positives and nurtures ill-will.

Others have said this before; but the Elder Statesman’s baritone will be heard in the archipelago above any chorus of foreign human rights activists calling for – wishing for, praying for – a compassionate Indonesia.

Australian journalist and author Duncan Graham lives in East Java and writes for the Indonesian media. Read his blog here.