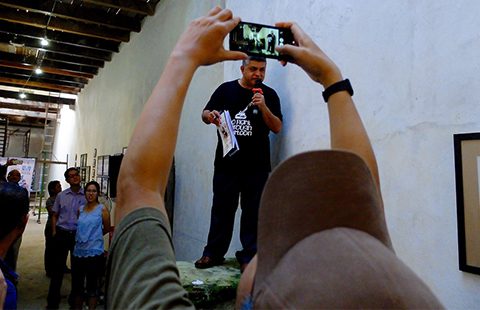 Wielding the pen as a torch for freedom Review of the fifth Georgetown Literary Festival in Penang 27-29 November.

Set against the momentous democratic transition in Myanmar and the stark military power grab in neighbouring Thailand, Malaysia’s political troubles easily fade into the background.

Yet for a growing number of Malaysians, the signs are alarming.

Revelations of greed and corruption in high places have undermined the legitimacy of the country’s leadership and generated a concerted protest movement, which the government has moved against using draconian sedition laws that have effectively eroded the last remaining checks and balances on power in what is ostensibly a parliamentary democracy. The resulting political tension has begun to pick apart the frail social contract that keeps Malaysia’s diverse society hanging together.

As a result it has become next to impossible for Malaysians to voice their concerns either in the media, which the government has the power to muzzle, or in parliament where members who dare to criticise are suspended — all on the grounds of sedition.

In a recent move, the ruling party, UMNO, which will hold a party assembly before the end of the year, has gagged leading party members critical of Prime Minister Najib Tun Razak, who has failed to explain how RM 2.6 billion ended up in his personal account.

So when a group of Malaysian writers gathered in Penang, one of the last bastions of opposition power in the country, under cover of a Literary Festival supported by the state government, it was a rare opportunity to openly discuss the state of the nation.

The Georgetown Literary Festival, now in its fifth year, opened with a roar.

“Injustice is happening all over the country; the government is going mad,” thundered commentator Azmi Sharom at the opening event, which was a book launch featuring the Australian lawyer Mark Trowell who has written a detailed account of the trial of opposition leader Anwar Ibrahim, jailed earlier this year for sodomy.

The next day, renowned Malaysian cartoonist Zulkifli Anwar Ulhaque, popularly known as Zunar, proudly exhibited dozens of the cartoons that have earned him sedition charges that could land him in jail for the next 40 years. He stood before a rapturous crowd in a dilapidated old shophouse under repair and turned makeshift gallery, provocatively waving two of his banned books.

“I told the police after they detained me that you can ban my books and cartoons, but you can’t ban my mind.”

It’s precisely because Malaysians think and speak so articulately in a number of languages, including English, that gatherings of writers like this become cathartic platforms of free speech. Opening the festival, Penang Chief Minister Lim Guan Eng told a packed room in one of Penang’s stylish boutique cafes “at a time of deceit, telling the truth is a revolutionary act.”

Perhaps, but Penang offers a palpably safe space for debate about the state of Malaysia. The opposition Democratic Action Party controls the state government; gatherings in private premises don’t require a permit — at least for now. The clampdown on free speech and the polarisation of Malaysian society along ethnic and religious lines dominated the debates. Prominent Malaysians including writer and social activist Marina Mahathir, Penang born novelist Tan Twan Eng, and filmmaker Dain Iskandar Said drew large crowds of mostly young Malaysians with a sprinkling of foreigners to sessions that dwelt on Malay identity and the State of the Nation.

These sessions were platforms for the kind of free flowing debate that simply doesn’t make it into the bridled Malaysian media, as even formerly free-wheeling bloggers now fear the far reaching sedition law that makes it an offence to do anything that would broadly “promote feelings of ill will towards different races and religions.”

As in neighbouring Thailand, the authorities in Malaysia have wielded their repressive instruments with precision, avoiding the mass arrests of previous authoritarian eras, but targeting those deemed a threat.

“The authorities are a little bit smarter, arresting a few here a few there; they are boiling us a bit at a time,” said Azmi Sharom, the opposition commentator.

Worse still, the Sedition Act is fuelling ethnic and racial division in the country. Faced with serious charges of corruption it has failed to explain, panellists like Marina Mahathir lamented the government’s resort to generating fear in the Malay community that it’s long held privileges and the status of Islam are threatened by the opposition.

In turn, the Malay majority is susceptible to manipulation, because, as one speaker put it: “We Malays tends to believe our leaders deserve to do well, which breeds a complacency about corruption.”

This acceptance of what the leadership says and does, it was agreed, results in an uncritical receptivity to fears about the threat to Islam that has sowed divisions in Malaysian society — to the point where there are even calls for Muslims to be provided with separate shopping trolleys in supermarkets to avoid being tainted by non-halal food.

For one weekend picturesque Georgetown, the heart of Penang, seemed miles away from these repressive, regressive realities.

Malaysians of all stripes spoke freely and confidently about their hopes and fears. The handful of invited international writers provided a contextual backdrop; highlighting the parallel iniquities of the global slide towards polarisation and repression in the wake of the Islamic State attacks on Paris earlier this month.

Yet for all their stridency, the government probably felt safe. As with the Bersih protest movement that occupied downtown Kuala Lumpur in August, events such as this can easily be dismissed as marginal, futile screaming in the wind.

For the most part the majority Malay population doesn’t participate, doesn’t have a voice. Yet according to recently released figures, the Malay are becoming marginalised and poorer, relative to the privileged political elite.

The underlying angst many Malaysians feel and which was given rich expression in Georgetown this year is real. They fear a society in which pluralism has become a dirty word; where Malay culture is no longer expressed through the wayang or rhyming verse, but in the rigid, polarising conservative dogma of race and religion.

Filmmaker Dain Iskander Said put it well: “As Malays we are defined officially. Not actually by who we are, that’s why the nearest root is religion. That’s why we grab at it.”