Wishful thinking in the polling age So, the election is over and we now know that the polls got it wrong. Or did they? As Tom Pepinsky has shown in a recent blog entry, some polls actually got it right (well, more or less), but it seems that many of us chose to focus our attention on those pre-election polls that had predicted a much more decisive win for the Indonesian Democratic Party of Struggle (PDIP). In other words, we chose to trust those polls that told us there would be a massive ‘Jokowi effect’.

The effect failed to materialize. Ok, PDIP won a plurality, but the widespread expectation was of course that it could win far more than 19%. Perhaps though, it was more than just an expectation. I suspect that many observers – including myself – did not merely expect a better result; we wanted the Indikator poll that predicted 24.5% for PDIP to be correct, even though few of us would have admitted it openly. And why not hope that PDIP would win big? The party may not exactly be an icon of political reform, but it had at least nominated the presidential candidate we all want to win in July (don’t we?) and if it had indeed won by a massive margin, there might even have been genuine hope that we would see the end of Indonesia’s notorious tradition of rainbow coalitions. A prospect, almost too good to be true, isn’t it? Well, wishful thinking.

Equally unfulfilled remained the expectation (or hope?) of many observers that the most conservative of the Islamic parties, PKS and PPP, would fare poorly on election day. Pre-election polls had nourished this hope, telling us that PPP would stagnate at its low 2009 results and PKS might even struggle to meet the electoral threshold of 3.5%. This seemed good news to everyone favouring a progressive turn in Indonesia. Looking back at the last few years, weren’t we all appalled by the way PPP chairman and Minister for Religious Affairs Suryadharma Ali was frequently fanning rather than containing growing religious intolerance in Indonesia? And PKS? Granted, this party may have moderated its formal positions on many issues, but isn’t there always this lingering suspicion that deep in their hearts these guys still want to turn Indonesia into an Islamic state? Frankly, I sensed more than just a little bit of Schadenfreude among foreign observers when (ex)-party chairman Luthfi Hasan Ishaaq was arrested and later convicted to a lengthy jail term. Surely, we thought, pious Muslims would no longer vote for a party whose chairman had so brazenly betrayed the very ideals PKS was originally built on. Wishful thinking, again. 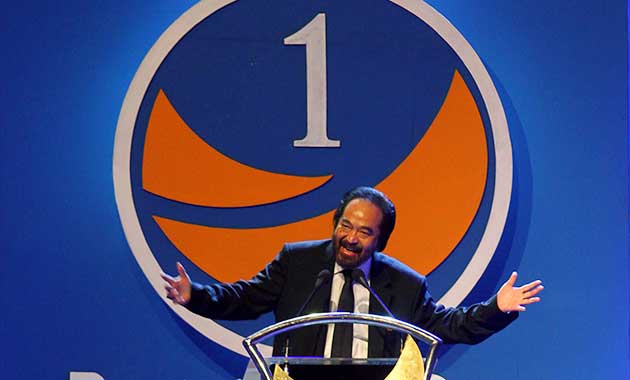 Finally, another unfulfilled expectation (hope?) was that the only new party allowed to compete in this year’s election, the National Democratic Party (Nasdem), would flop. The often-cited Indikator poll shortly before the election gave it 3.6%. That seemed about right, and left room for the possibility that the party might eventually fail to clear the threshold. And why should it clear the threshold? Surely, we thought/hoped, Indonesians would not buy the Nasdem narrative of representing a breath of fresh and reformist air. A party led by Surya Paloh representing hope for reform and renewal? You cannot be serious! Well, serious or not, expectations that Nasdem would fail were, once again, wishful thinking.

In view of these considerations, I would argue that the outcry about the allegedly inaccurate polls does not simply reflect concerns about misleading experiments by pollsters. What it rather seems to reflect is widespread disappointment with the fact that the results are simply not what we wanted.

But the results are what the Indonesian voters wanted. In contrast to widespread expectations, they clearly distinguished between the parliamentary election on the one hand and the upcoming presidential election on the other hand. Detailed figures about constituency-level results are not yet available, but it does indeed seem likely that, as Ed Aspinall has argued, voting behaviour was driven primarily by concerns about local constituencies and candidates rather than broader national politics. Jokowi, many voters apparently reasoned, will matter when the presidential election is held later this year, but for the legislative election, it is the local candidates, their clientelistic networks, and the perceived ability of these networks to bring home the pork, that matter most. Many PDIP candidates, it now seems clear, were either lazy campaigners or just not well-enough connected at the grassroots to produce the kind of result the party (and we?) were hoping for.

Looking ahead to July, Jokowi may still become president. In fact, he probably will. But when he takes office in October he will be confronted with a parliament in which his own party commands a much smaller fraction of the seats than anticipated. Moreover, alongside the PDIP legislators there will be representatives of no less than nine other parties. With such a highly fragmented parliament, Jokowi will need to prepare for many long and onerous negotiations with the legislature, a scenario all too familiar from the Yudhoyono years. Not exactly the best preconditions to kickstart much-needed reforms in Indonesia. This is why I am disappointed with the results.

Dr Dirk Tomsa is a Senior Lecturer in the Politics and International Relations program at La Trobe University, Melbourne.