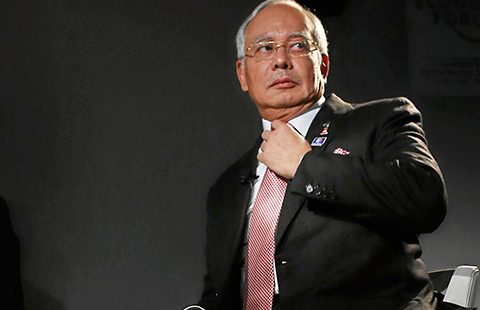 Witch hunts and woe in Malaysia As embattled prime minister Najib Razak still faces questions over the 1MDB scandal, the rule of law and justice are collapsing.

The 1MDB saga continues on par with the soap-opera Days of our Lives.

The twists and turns come at a camel’s gallop. After all the promise of righting a wrong, Malaysians – and others – are still waiting to see if prime minister Najib Razak will launch a defamation suit against The Wall Street Journal. It’s been eerily quiet. Is this the lull before the storm?

Meanwhile, Najib Razak hasn’t said a word on the source of the US $700 million found parked in bank accounts in his name. Nor has he said what he has done with the loot. Buying votes to win elections 2013 most likely.

All he has claimed is that the money isn’t his, and that he never benefited from it. There’s no element of greed here, nor of deception, on his part. So he’d have Malaysians believe. Other than that his lips are Superglue sealed.

At the same time, the Malaysian Anti-Corruption Commission (MACC) poked its head out the trapdoor to claim its boss, Najib Razak, is clean, that the $700 million found in bank accounts he directly controlled – being in his name – came from the Middle East.

They were financial donations to the political party Najib leads, the United Malays National Organisation (UMNO), in a virtual one-party state. But why would anybody believe the MACC when it has been accused of murdering in custody DAP political activist Teoh Beng Hock and covering it up since?

And still more shenanigans and malarkey have happened over the last week. These are some of the best of Malaysia’s political trysts.

The MACC is probing the 1MDB fiasco. While the MACC has been raiding the offices and homes of those connected one way or another to the failed and bankrupt sovereign wealth-making investment fund, and arresting people for the purposes of questioning them, the police under Inspector-General Khalid Abu Bakar was launching raids on the MACC.

In six short years Malaysia has morphed into one big looney farm. But then it has had a long gestation period – 39 years, to be sure.

Just the other day I saw an advertisement by Malaysia’s peak tourism body, funded by the Najib regime, pasted on the back of a bus in Hong Kong. It read: “Malaysia – Endless Celebrations”. I couldn’t decide whether to laugh or cry. Not so long ago, Najib himself had boasted Malaysia as the land of “endless possibilities”. I laughed hard then too.

On the weekend, I read a piece in The New Yorker by Jeffrey Frank titled ‘Nixon’s Nightmare – and Ours – Forty Years Ago’. We all know the story of Richard Milhous Nixon and his Watergate infamy, and how two Washington Post reporters, Bob Woodward and Carl Bernstein, brought him down to his knees, milled a confession out of him on national television, and forced Nixon to quit the presidency before he faced certain impeachment.

Frank used two key expressions when discussing Nixon: the first, “fevered detestation”, which he claims, rightly, to have abated since today’s generation of Americans will have little to no clue what or indeed who Nixon was. And those who do are a dying breed.

Former US president Bill Clinton, at Nixon’s funeral, hoped that Americans would judge Nixon only on “his entire life and career” and nothing less. Perhaps Clinton was really speaking for himself, hoping people will never recall Lewinsky and his infamy. Najib has his own ‘gates’ too – too many to count. No doubt he’d be making similar wishes as well.

The second expression Frank used relating to Nixon was that the man “remains an emblem of political villainy”. Frank added:

He was, after all, a President willing to countenance law-breaking and then cover it up; we know this because he had the bad luck to leave an uncensored oral history: the secret White House tape recordings made between February, 1971, and July, 1973. They captured some of Nixon’s worst moments.

Which reminded me at once of Malaysia’s ongoing woes. These woes have become unquestionably severely embarrassing and also terribly dangerous for Malaysia and Malaysians.

Every day the risks of political, economic and social rupture is escalating. Malaysians have been entrapped in Najib’s and UMNO’s undermined institutions, none of which are worthy of the name or definition. Continuing from Mahathir Mohamad’s legacy, the mounting risks are, without doubt, high.

So desperate and so thoroughly incompetent is Najib that he cannot bring himself to admitting his wrongs. Instead, he has chosen to box himself into a corner and covering himself in Stalinist or Maoist stripes. He has suspended Malaysia’s premier local media The Edge for daring to uncover the truth of corruption that maligns Najib, UMNO and ruling coalition Barisan Nasional.

Twitching in his grand seat, Najib parceled out his troopers on a witch hunt the likes of which would have made Joseph McCarthy enormously proud. So rather than tell the truth, Najib has chosen to shoot the messenger – one of the final acts of a desperado.

Najib had has grown even more desperate in the last few days.

He sacked his attorney-general, Gani Patail, who was said to be in the midst of poring over investigation papers on Najib Razak. He sacked Shafie Apdal, his rural and agriculture minister, who’s a key member of the king-making UMNO Supreme Council, despite Apdal’s multitude of chronic gaffes. And he sacked Muhyiddin Yassin, his deputy PM, who claimed Najib had confessed to the US $700 million in his bank accounts.

On the weekend, Najib demanded that UMNO leaders – who had also benefited from distribution of the US $700 million in his accounts – ought to end their hypocrisy. So it comes back to the money, its murky trail, the question of exactly who his Middle-Eastern donors were — and why them, specifically – and why, indeed, the money trail continues to be linked more directly to the bankrupt, debt-ridden 1MDB.

A crucible the size of a giant ocean-going ship’s anchor now hangs around Najib’s neck, and its leaden mass is weighing him down by the minute. Either he drowns in his own villainy or UMNO leaders move against him sooner rather than later.

Najib is now surrounding himself with his loyal sycophants who can be easily bought with promises of wealth and power. This has been Malaysia’s moral destiny – corruption, a cancer that was unleashed not in 1969 but earlier and within the ranks of UMNO and the Malay (Bumiputera) Economic Congress. The longevity of Malaysia’s political power rests almost entirely on what Yoshihara Kunio called “ersatz capitalism”.

The moves against the MACC and other investigatory bodies, such as the Public Accounts Committee, which Najib has practically dismantled by promoting its committee head to a cabinet position, are a sign not dissimilar to Richard Nixon’s in the late 1960s. William Scranton, a friend of Jeffrey Frank, described the state of Nixon’s mind then as “darn paranoia.” Worse, Najib – like Nixon – appears to be encouraging lawlessness in Malaysia, or at least extra-judicial powers in the executive.

Few if any Malaysians will have read much less heard of one of Arthur Miller’s great body of literary work, The Crucible. It is play, first published in 1953, and based in Salem, a village in Massachusetts, in 1692. A group of girls fell ill, becoming victims of hallucinations and seizures. Accusations of witchcraft became rife. Villagers are accused of consorting with devils and other evil spirits, and the state government and its judiciary are accused of being heavily influenced by religious dogma. Dozens of people are jailed on mere suspicion.

Literary critics have argued that Miller was criticising McCarthyism through the play. The co-incidence is more than uncanny. Those in Salem who refused to incriminate friends, relatives and colleagues would lose their careers or be blacklisted from potential jobs. Malaysia’s opposition Democratic Action Party’s outspoken and adept finance spokesperson, Tony Pua, has been banned from traveling abroad, as is S Ambiga, the former head of electoral reform movement Bersih.

Najib Razak is devoid of all political legitimacy and personal integrity. He can’t save himself any more than he can be saved by others.

In Act III in The Crucible, one of Miller’s main characters, Danforth, attempting to understand the dichotomy between God and the devil, whether dissent is associated with satanic forces, and the underlying logic of the witch trials, resolves thus: “A person is either with this court or he must be counted against it.”

And so it is too in Malaysia.