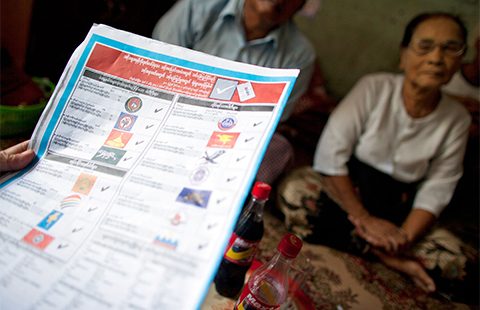 With no vote we have no voice Last Wednesday, just after midday on the first day of advanced overseas voting for Myanmar’s 2015 election, I found myself in the embassy in Canberra.

I was the only voter there and could feel the full weight of such an important an occasion; not to mention the heavy décor and traditional settings.

After registering, I first received the ballot paper for the Amyotha Hluttaw, or Upper House seat in the national parliament.

I moved off to the small, private area set aside to carefully place a tick beside my preferred candidate, put the paper into an envelope and drop it into the ballot box.

The same procedure followed for the regional parliament seat.

Naturally, I then expected to receive the ballot paper for the Pyithu Hluttaw, or Lower House seat. However, to my surprise, I was informed by the embassy staff that they did not have the ballot paper for my township of South Okkalapa. One even sheepishly suggested that it might be due to the fact that there is no one contesting that seat.

There were no words to describe my shock.

Almost every electoral seat up for contest in Myanmar has at least two candidates, and it is widely known that South Okkalapa is a hot seat with the incumbent MP, also the former mayor of Yangon, contesting.

If it was an honest mistake, this is the least kind of blunder anyone from the Union Election Commission (UEC) or any other responsible authority should make. For me it indicates their blatant incompetence.

If it was a dishonest act, it was a dreadful but also somewhat pointless stance from whoever is conspiring; there are only around 15 people registered to vote at the Myanmar Embassy in Canberra for the South Okkalapa Township.

If this was in fact a concerted act, what kind of dissatisfaction and distrust would this cause among other voters, especially in Singapore, Malaysia and Thailand where there are hundreds voting for the same electorate.

This is not the first time the vote for the Pyithu Hluttaw seat of South Okkalapa has been hampered (deliberately or otherwise).

In 2010, there were thousands of votes in favor of an independent candidate against U Aung Thein Linn.

However, U Aung Thein Linn then officially won overnight due to a flood of dubious ‘advance votes’ coming from ‘overseas’.

This year, U Aung Thein Lin is again facing a head-to-head showdown with the same independent, now a candidate for the National League for Democracy (NLD). Who is to be held accountable if history repeats and we witness a similar victory to 2010?

Who is to be held accountable to voters like myself who lost their full right to vote? And who is to calm the widespread mistrust of the UEC on account of its overall handling of the election processes, and the mishaps surrounding the overseas vote?

At the end of the day, voting is not simply the endpoint in the democratic processes; it is the critical point for giving the people their voice and a genuine say in a supposed democracy.

Thet Zaw Htwe is a second-year of Master of Environmental Management and Development student studying at Crawford School of Public Policy, the Australian National University.