The history of military rule, armed conflict and the influence of gender norms mean that women and men live, work and socialise in different ways. Women are generally expected to stay at home and concern themselves with household affairs. And yet, since the early days of the coup, women have been visible opposing dictatorship and participating in protests through, for example the pots and pans campaign, civil disobedience movement and neighborhood vigilance groups.  They are frontline protestors and activists on social media. Images of women have proliferated on social media giving them unprecedented visibility. It is inspiring to see the sheer number of women who are usually seen as apolitical, such as teachers, become politically active and taking risks by participating in the protests. Women of different ages and social backgrounds have been at the heart of these protests.

Since Myanmar’s independence in 1948 until 2010, the country was ruled by successive military regimes with the military playing a key role in Myanmar politics even in its democratic transition after the 2010 elections. Military rule has reinforced “the authoritarian, hierarchical and chauvinistic values that underpinned male-dominated power structures“.  Because of the close links between the military and perceptions of male supremacy, this makes discussions and progress towards women’s rights and their participation in public life difficult to envisage for many.  Under the military one party state, the civil and political rights of all citizens were decimated and women experienced violence through the use of rape as a tool of war. Even during the transition to democracy, with the adoption of a new constitution, Myanmar remains a masculine state with its male-dominated institutions where there is no belief in women’s equality with men, or support for women to become leaders and politicians. Women remain notably under-represented in all aspects of public and political life in Myanmar’s democratising state. Women comprise 13.6 per cent of elected MPs in the lower house and 13.7 per cent in the upper house at the national level following the 2015 elections, and only 0.5 per cent of women elected at the village level.

For women’s organisations and networks, which made some gains during the transition, the return to the military regime is a blow to progressing the gender equality agenda. Women’s organisations and networks such as Gender Equality Network (GEN) and Women’s Organisations Network (WON) have rejected the military regime by boycotting the Myanmar National Committee on Women (MNCW), the national machinery for gender equality. Membership of GEN and WON to MNCW was approved under the NLD government, for the first time opening up space for women’s voices to be heard at a policy level. Previously that space was occupied by state-sponsored women’s organisations. Most members of these organisations were wives of generals, thereby reinforcing rather than upsetting patriarchal power.  Despite their gains in this space, GEN and WON refuse to work with the military regime. “We have zero trust on the military council’s promise of fulfilling human rights because we believe women’s rights and gender equality only survive in a democratic system not under military rule” said May Sabe Phyu, the director of GEN.

A number of women’s organisations and networks also have boycotted the Technical Working Groups (TWGs) established to support implementation of National Strategic Plan for the Advancement of Women 2013–2022 (NSPAW). In statements rejecting the TWGs, the women’s groups explained that they do not recognize the military council as the legitimate governing body, therefore cannot support its administration. By taking away women’s voices from the policy and political processes of the military regime, they challenge the legitimacy of the State Administrative Council (SAC) formed by the military. Simultaneously, they channeled their voices through open letters to international bodies such as UN Human Rights Council and ASEAN member states, and demanded the restoration of democratic rule in the protests.

The military has reinforced the idea of its protective role as the norm by emphasizing its duty to “protect democracy“, “constitution” and its intention to form a “true and disciplined democracy” in its claim of mass electoral fraud in the 2020 election as the justification for the coup. In fact, the military has nurtured its self-image as the “guardian” of the state throughout its patriarchal rule. The military-guided constitution includes references to women principally as ‘mothers’, which not only reinforces a gendered stereotype, but also contends that their reproductive roles are in need of protection (Section 32). The Race and Religion Protection Laws (2015), passed under the military backed Union Solidarity and Development Party (USDP)’s government, is an example of controlling women’s bodies and limiting their religious and personal freedoms, in the name of ‘protecting’ women.

During the protests, women from Kayah State have been effectively challenging the norm, imposed by the military, that women need protection and the military as the protection. In their rally, women carried bras and sanitary pads as symbols of opposition to the coup. Norms perpetuate ideas that women’s inner clothing, such as bras and pads, is dirty; that women are impure during menstruation; and that women’s roles should be located in the private sphere. By bringing these items into the public sphere, they challenge patriarchal norms and shame the military. Their poster declares that “the military can no longer provide protection for us, not even at the level of a pad” –a timely and relevant narrative as the number of women and men killed in crack-downs across the country increases day by day. In this context, Karenni women have challenged the norm that the military is the protection/protector for the women and all of the people. At the same time, they challenge the norm of women being private sphere.

Women are also challenging other gender norms such as “hpon,” which gives higher authority and status to men. This perceived inherent spiritual superiority leads to men attaining positions of power and influence in political and religious institutions. In the prevailing culture, men tend to avoid walking under women’s drying htamain or longyi (sarong), as they believe that this can harm their hpon. So women are required to hang their htamain lower than men’s clothing and at the back of the house. Protestors have subverted this superstition  and turned women’s under garments into an effective protection/defense strategy by hanging women’s htamain in the lines across the street and building htamain barricades to induce fear and lower the masculine status of the security force. Images of security forces trying to remove these htamain shared on social media show that this strategy challenges deep-seated misogynistic/patriarchal beliefs held by the military, and demonstrate that the htamain has been turned into an empowering symbol of resistance. 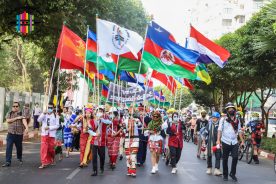 Women saw this strategy used widely by women and by men, and began to consider it time to directly challenge patriarchal norms, misogyny and sexism rooted in the dictatorship. A group of young women protestors called for a nationwide htamain movement on 8 March, International Women’s Day (IWD), urging people to use women’s htamain as flags. Their slogans, “fly the htamain flag, end the dictatorship,” and “our htamain, our flag, our victory” became the IWD’s theme in Myanmar. Using the htamain as the flag flying high in the marching, women have effectively challenged the private/public roles and patriarchal norms that limit women’s potential.

Phyo Nay Chi, an activist in the campaign, said “we want to highlight the significance of women’s participation in the fight against the dictatorship so we use htamain as the flags during our marches, and as a symbol of our victory over the dictatorship and patriarchal norms.” The night before the movement the SAC passed an emergency law making hanging htamain on the street illegal. Despite this, the women’s action was successful in many areas of Myanmar. There were many posts on social media young men wrapping htamain around their heads and bodies and holding htamain flags in support of the campaign.

This is a revolution in the making, opposing the misogynistic dictatorship as well as its underlying patriarchal ideology. Myanmar women now stand at a unique and revolutionary moment in their history. Although norms and experiences are diverse, women find common ground fighting the dictatorship and the patriarchal ideology. Women in Myanmar need to seize this moment to define a shared vision that also celebrates their differences.  How can we create our own, context-specific notions of equality and rights, breaking the patriarchal discourse that has dominated Myanmar’s recent history?