"Of the 100 PAD members I interviewed, 76 had previously never actively participated in a political movement. 63 had not even followed political news before their foray into protesting with the yellow shirts."

At its incipience, the movement against Thaksin Shinawatra (and his subsequent nominee governments) compromised a motley—even contradictory—crew of groups loyal to diverse ideologies and political standpoints. This is a history now easily forgotten. They ranged from conservatives genuinely opposed to democracy and bent on defending nationalism and monarchism, to factions who mobilised to defend democratic ideals and who were resolutely wary of nationalism and royalism.

During the People’s Alliance for Democracy’s (PAD) early days, most of the movement’s conservatives members constituted the rank and file. In contrast, several leaders who exercised managing authority over protest sites came from liberal backgrounds. As one anonymous leader of the movement in Udon Thani remarked, “The Rajabhat rally was organised [by liberals] because we had experience in managing crowds. No one else did”. How was it that this heterogeneous network eventually mobilised down a progressively conservative direction, whereby royalist, nationalist and anti-democratic forces overwhelmed the movement?

I argue conservative mobilisation strategies married two previously disparate networks: first, scattered right-wing groups and second, an apolitical middle-class mass. Right-wing networks, once weak and diffuse, were brought together by the need to mobilise a popular base and in doing so forged a relatively united front. Simultaneously, these right-wing leaders attracted through the discourse of “Threat, Big Crisis, Action Is Needed Now” (ภัยคุกคาม-วิกฤตครั้งใหญ่-ต้องทำอะไรเดี๋ยวนี้) the support of members of the middle-class who had never before participated in a political movement—who were subsequently “politically awakened”.

When these two networks coalesced, conservative elements overwhelmed the movement against Thaksin in terms of numbers, bargaining power and resources, progressively squeezing out liberal elements. I base my genealogy of how the movement against Thaksin took on a conservative zeal—something that we may now take for granted—on interviews with 100 people who once mobilised against the tycoon-cum-politician. Interviewees came from 13 provinces across four of the country’s regions.

Prior to the 1960s, Thai elites and governments had never systematically sought to mobilise a right-wing popular movement. Right-wing political networks remained fairly scattered even before the unrest of 1973, until royalists and coup-makers in 1976 created and nurtured extremist mass groups (for example, the village scouts) in their dual assault against communism and democracy. But the egregious popular violence against students on 6 October 1976, coupled with shifts in US foreign policy in the aftermath of the Cold War, forced military leaders and other elites to adapt their management of the right-wing masses. Rather than overt mobilisation, conservative elites embarked on a more insidious, long-term hegemony project to promote royalist, nationalist and “moral” ideologies. The result was the atomisation of right-wing individuals, dispersed without systematic organisation or leadership.

The movement against Thaksin was the first movement since 1976 to re-awaken and coalesce those weak and scattered right-wing groups into a major political force. It has been well documented that Sondhi Limthongkul and other PAD leaders galvanised supporters by framing Thaksin as both a threat to the monarchy (whereby Thaksin allegedly plotted to eradicate the institution to install himself as president) and the nation (allegedly shown through his sale of the Shinawatra’s shares in Shincorp to Singapore’s Tamasek Holdings).

But in retrospect, the formations in which right-wing networks united were sometimes peculiar and surprising when viewed from the ground. In the provinces of Nakhon Ratchasima, Khon Kaen and Udon Thani, right-wing pressure groups had previously mobilised around nationalist issues such as the the Phra Viharn temple, communism and the alleged foreign manipulation of left-wing students during the 1970s. But under the Thaksin administration, these nationalists clasped hands with those former left-wing students—now grown up—as well as other liberals who had protested against US army bases in Thailand during the Cold War. Nationalism, once progressively manifested in the case of the latter, provided sufficient common ground for joint resistance against foreign mining projects being driven by the Shinawatra government.

(But nor did the PAD aim nationalist discourses only at “Thais”! The movement’s leaders were successful in fostering what other scholars have called a “twisted nationalism” to attract other ethnicities ranging from Chinese, Lao, Indian, Vietnamese to farang. Kasian Tejapira has documented a narrative in praise of “patriotic Sino-Thais” (“ลูกจีนรักชาติ [ไทย]”), a discourse expressed by my interviewees in terms of a moral debt to the monarchy incurred by the chance to build a new life in Thailand. Interestingly, efforts by the PAD complemented contemporary tendencies by the Thai state to assimilate Sino-Thai migrants and their descendants, despite a history of aggressively mobilising nationalism against Thailand’s Chinese populations.)

Compared to liberal members of the PAD, conservative members threw themselves—whether through time, money or militancy—into the cause. Wealthier members in the anti-Thaksin donated money and material supplies, while others gave time as “full-time protesters” who ate meals and slept as permanent fixtures at Bangkok and provincial protest sites. Out of 75 conservative-leaninging PAD members, 57 (or 76%) protested in “full-time” capacities, in comparison to only 8 out of 25 liberal-leaning members (32%). Unsurprisingly, extremist perceptions that red shirts “threatened” the nation and monarchy proliferated amongst the PAD “guards” who volunteered to man the front lines during tussles with state forces and red shirts.

Through sheer dedication, right-wing members of the PAD progressively colonised the movements leadership. Their success in appealing to middle-class citizens with further cemented the movement’s turn towards conservatism. Of the 100 PAD members I interviewed, 76 had previously never actively participated in a political movement. Indeed, 63 of the interviewees had not even followed political news before their foray into protesting with the yellow shirts.

Despite their initial disinterest in participating in politics directly, middle-class members of the PAD overwhelmingly expressed support for two political parties: the Democrat Party and Palang Dharma. Of those 76 individuals with no direct experience in a political movement, 44 backed the Democrat Party, 18 supported the Palang Dharma Party (and later the For Heaven and Earth Party) while 14 had no preference for any party.

Reasons for supporting these parties were given overwhelmingly in terms of their image: morality, goodness and class proximity. In the case of the Democrat’s Party, it is a relatively institutionalised party. In Palang Dharma’s case, its image of purity and distance from corruption is connected to Santi Asoke. Here, effectiveness in governance and actual policy were not of interest. Politics is boring but it was also dirty: marred by corruption and never moving forward in a positive direction. Almost all expressed pride in never having previously involved themselves in this dark realm.

In this post from the New Mandala archives Nick Nostitz reports on the killing of a protestor in central Bangkok, May 2010.

Anonymous PAD leaders explained that they sought to “empower” these apolitical individuals by avoiding strict structures when organising and structuring the movement. The trick was never making members feel dominated by the movement’s leaders or to be made to follow orders—members had to feel a modicum of independence in choosing to participate in politics.

As the PAD’s leaders attributed progressive importance to maintaining the backing of its middle-class supporters, middle-class rank and file were rapidly promoted to local leadership positions in the amphoe and provinces—some even enjoyed opportunities to run for office under the New Politics Party. A former treasurer of the New Politics Party, and a PAD leader in the province of Udon Thani, recalled their beginnings as a yellow shirt in collecting rubbish and setting up protest stages.

While the PAD’s leaders employed a discourse of national crisis to mobilise apolitical members of Thailand’s middle class, the resulting formations were again not exactly intuitive: many who responded to the call were not originally conservative in disposition. Thailand’s middle class inhabit a changing world, and many hold quite liberal values—many accept homosexuality, sex before marriage, migrant worker rights, a welfare state and decentralisation. Many are even opposed to coups. An anonymous professor from a university in Bangkok, and a former member of the PAD, explained his support for policies introduced under the Thaksin government which promoted human rights and decentralisation: “I backed the 30-baht healthcare scheme because it increased access for ordinary people. I backed the village funds in principle. In terms of self-management, it was decentralisation. But this was all in principle”.

So how was it that the middle-class rank and file of the PAD turned away from progressive causes and accepted a nationalist, royalist and conservative line emphasising “morality” in the fight against corruption? In some ways, it was the default path. First, conservative ideologies are broadly hegemonic in Thailand. Conservative social movements will always be easier to understand and less controversial than progressive social movements. Second, the conservatism of the PAD became at the time broadly synonymous with “anti-Thaksin”. So long as the red shirts articulated their legitimacy by appealing to democracy and liberal economic values, those values became off-limits.

Kanokrat Lertchoosakul is the author of The Rise of the Octobrists in Contemporary Thailand: Power and Conflict Among Former Left Wing Student Activists in Thai Politics. 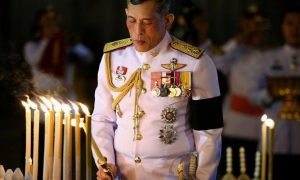 There are strong indications that Teerasak Longji submitted a petition for royal clemency. But unlike those condemned before him, his plea for clemency was rejected by His Majesty the King.