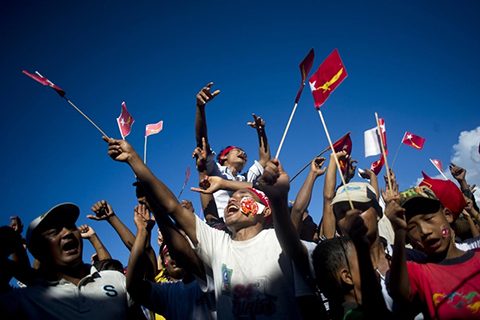 Why ethnic parties didn’t do better in Myanmar’s elections.

In what has been called a voting ‘tsunami’, Aung San Suu Kyi and her National League for Democracy (NLD) trounced the opposition, the military-affiliated Union Solidarity and Development Party (USDP), in Myanmar’s 8 November elections.

The NLD claimed close to 80 per cent of the elected seats in the two national chambers, giving it a strong mandate to govern and pass new laws within the existing constitution.

The USDP was not the only victim of the NLD’s landslide victory. Although minor players at the national level, some ethnic parties are a major force within their respective states and were expected to poll quite well. But the NLD dominated there too, winning 475 of the available 660 seats. The performance of ethnic parties was patchy at best.

The NLD passed the significant two-thirds majority mark in all of Myanmar’s regions and in all but three of the seven ethnic minority states. Of the remaining three states, the NLD emerged as the largest party in the Kachin State parliament but with the final few seats due to be announced, looked likely to fall just short of a decisive majority.

In Shan State and Rakhine State, the NLD were less successful and some ethnic parties performed well. In Shan State, Myanmar’s largest and most diverse, the independent Shan Nationalities League for Democracy (SNLD) won national and local seats.

This was the only election that it has been allowed to contest since 1990, when it also performed strongly. Parties representing smaller ethnic groups polled well in some areas within Shan State: the Pa-O National Organisation and the Ta’ang (or Palaung) National Party held seats won in 2010 and strengthened their local bases.

Elsewhere, minority parties including the Kachin State Democracy Party, and the Zomi Congress for Democracy in Chin State, each won in several constituencies.

Yet overall, the only ethnic party to win a majority at the state level was the Arakan National Party (ANP) in Rakhine State. Associated with Rakhine nationalism, the party also won 22 out of the State’s 29 elected seats in the national parliament.

The first is fragmented ethnic parties. This saw ethnic parties compete against each other. The result was not only a split ethnic vote, leaving space for the NLD to prosper, but also limited public enthusiasm over local parties that appeared small and weak.

In addition, the population of many constituencies within Myanmar’s ethnic minority states is mixed, reducing the electoral impact of promoting narrow ethnic affiliation. Linguistic and other divisions within what is formally designated as one ethnic group also undermined support for specific leaders or parties.

Second, there was limited time and resources for ethnic parties, many of them new, to build up a strong following in the lead up to the vote. Some had been banned until 2012 or later, often as a result of past affiliations with armed groups.

The few ethnic parties that were successful in the election tended to have stronger local networks. Most obviously, the ANP in Rakhine State linked effectively with civil society groups including extreme Rakhine nationalists, religious leaders, and local businesses such as hoteliers in Kyauk Phyu and fish processors in Sittwe. In southern Shan State, the Pa-O National Organisation is affiliated with the largest local business conglomerate, the leadership of the Pa-O Special Administrative Zone, and armed militia.

Fourth, greater expression of ethnic identity did not translate into votes.

Support for ethnic leaders and criticism of continued ‘internal colonialism’ by ethnic majority Bamar across government and businesses are accepted norms of conversation in many ethnic minority areas. However, strong ethnic affinity does not seem to have translated into votes for minority parties. Just as pundits overestimated the extent of support for the USDP, so they may have misjudged the appeal of ethnic parties.

The Lady’s status is so strong that it may overcome ethnic division. Her projected image of benevolent power, and her opposition to the military, raises her above all others. This image was carefully managed in the run-up to the election. For instance, Aung San Suu Kyi’s failure to speak out against anti-Muslim rhetoric and violence may have upset international audiences but was in tune with the dominant view across most of the country.

Sixth was the deep dislike of the military.

Decades of abuse by military leaders were felt most strongly in minority areas. Causes of resentment included the impact of violent conflict on civilians, land grabs, human rights abuses, and repeated instances of discrimination along ethnic or religious lines. This legacy has been hard to overcome, even if the army is more restrained these days.

Aspirational politicians in many of Myanmar’s ethnic minority areas faced a challenging environment defined largely by ongoing conflict and a difficult, protracted peace process. They needed to tread a fine line in order to gain permission to stand from the government’s Election Commission while also avoiding unpopular pro-military associations.

Seventh, was the impact of national parties going local. These parties’ appeal was boosted by fielding local candidates in many constituencies, reducing the ethnic divide. Aung San Suu Kyi’s late campaigning in several minority states may also have boosted her local appeal.

Implications
Overall, the 2015 general election results look similar to the results of the 1990 election, the last time that the NLD was allowed to stand. On both occasions, the incumbent military-affiliated party was thrashed and the NLD won just short of 80 per cent of the seats.

The reasons for this overall pattern relate to the strength of the NLD and the weakness of most ethnic parties. Many ethnic parties were unable to compete. If they are to prosper in future, they may need to form stronger alliances and build up their local networks.

Unpredictable future factors include the possibility that ethnic armed organisations will seek to enter the local political arena if peace talks make headway. The striking success of the NLD and the failure of many ethnic parties may make them wary of agreements to replace armed struggle with peaceful democratic processes.

Positively, perhaps, the election results suggest that the broad goals represented by Aung San Suu Kyi were more attractive than the parochial interests of specific local groups. Minorities are not necessarily any more inward-looking than others in Myanmar.

Most people in ethnic states do not live in isolated upland villages. Mass media, increased literacy in the Burmese language, and high levels of migration mean that many minority communities are engaged in the national and even international spheres.

More complex, and darker, lessons emerge from Rakhine State. The ANP’s success is partly based on solid campaigning, solidarity, and an affinity with local people. However, it also builds support – and direct electoral advantage – by promoting anti-Muslim chauvinism and encouraging an ethnically exclusive nationalism based around fear and insecurity.

It remains to be seen what path minority parties will follow in future.

Adam Burke is an independent consultant and researcher who has worked for international organisations across many of Myanmar’s States.

This article forms part of New Mandala’s ‘Myanmar and the vote‘ series and is based on a longer New Mandala ‘Inquirer’ paper. Read and download the paper here or by clicking on the cover below.