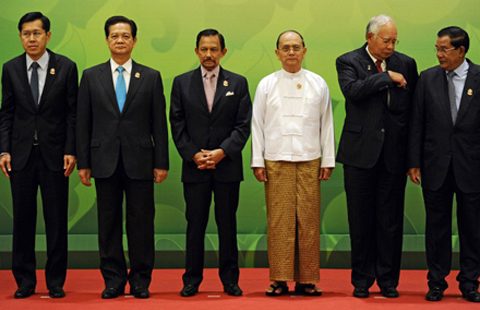 ASEAN’s position on Sunday’s elections in Myanmar is best characterised as distant but not disinterested.

In 2012, keen to demonstrate its democratic credentials to the world, Myanmar invited election observers from not only the European Union and the United States but also ASEAN to assess its by-elections.

In 2015 the Europeans are returning, as are a range of other bodies including the Asian Network for Free Elections and the Carter Center. But ASEAN is nowhere to be seen.

There are three reasons why ASEAN is following a hands-off approach to the 2015 elections.

The first is that Myanmar now sees little need for observation from its ASEAN partners. It is an ASEAN tradition that members do not use ASEAN itself as a way to address issues within and between members.

The second is that the decision to invite, and then send, observers in 2012 was atypical, and largely down to the work of then ASEAN Secretary General Surin Pitsuwan who was a keen advocate of both democracy promotion and Myanmar’s rehabilitation into the ASEAN fold.

Pitsuwan’s replacement, current Secretary General Le Luong Minh, has proven far less proactive when dealing with democracy issues in the region and has seemingly invested no effort in seeking an invitation from Myanmar.

The final reason is that Myanmar has already proven itself to its regional partners as having returned to the threshold of regional respectability that the military junta so clearly had violated before 2010. In 2012 there were considerable legitimacy benefits for ASEAN if the elections could be shown to be reasonably fair and open.

In 2015, with Western sanctions being reduced and Thein Sein having been a welcome guest at the White House, there is little new benefit for ASEAN in pushing such monitoring.

With Myanmar having been welcomed back into the ASEAN Community (it successfully chaired the organisation in 2014, and ASEAN members even welcomed the widely derided 2010 elections, let alone the 2012 ones), and its domestic practices no worse than some other members, ASEAN has no way to classify Myanmar as a special case.

Indeed the lack of ASEAN election monitors can be seen as evidence of the success of ASEAN in helping cement democracy this far just as much as a failure to protect it further.

This is not to say that ASEAN, or certain member states, are disinterested in unfolding events, just that this interest is now expressed in more classically ‘ASEAN’ ways. This interest concerns both the process by which the elections occur and the outcomes that the elections produce.

The advancement of the ASEAN Community will benefit if the elections are free and fair. The blueprint for the ASEAN Political-Security Community called for the compiling of ‘best practices of voluntary electoral observations’ and earlier in June of this year ASEAN held its first ever Election Observation Workshop in Manilla.

Dr Hassan Wirajuda, former Indonesian foreign minister, made the link between well-run and legitimate elections and the realisation of the ASEAN project to become people-centred clear in the workshop’s keynote address. In this sense ASEAN will benefit from the work of observers on the ground whether or not it is working directly alongside them.

The outcomes of the elections are less directly important to ASEAN given its strong commitment to domestic freedoms of members. ASEAN has no preference between an NLD victory or, somewhat more unlikely, a surprise USDP win.

Member states may have private preferences but, true to both the rules of ASEAN and those of international politics more generally, they have refrained from making open comment on which party or coalition they want to win.

However, the result, and more importantly how that result is followed up, is vitally important from a regional perspective. Key here is the issue of stability. It is in ASEAN’s clear interest that Myanmar is both internally tranquil and, as a result, a partner in regional cooperation and not a problem for regional partners.

With 91 registered parties, the majority of them ethnically or religiously based, the likelihood of the need to form political coalitions between very diverse groups is high, with all the tensions and problems that this will result in. Political wrangling is one thing, but ASEAN has a clear interest in there being no disorder that will attract negative global attention as well as exacerbate the internal tensions within Myanmar.

Beyond the election itself, Myanmar’s future government, from ASEAN’s perspective, will need to address the various causes of recent regional disquiet; the Rohingya issue with its direct effect on Indonesia, Thailand, Malaysia and ultimately the Philippines as a destination country, being the most recent example. ASEAN needs a Myanmar that is moving forwards with its domestic reforms and, ideally, extending those reforms into the most contentious issues that the policies of the current government have either caused or left unaddressed.

ASEAN then has much to gain, or lose, from the election but little ability to directly address the issue. It is hard to see the election itself receiving ASEAN’s opprobrium short of a complete and unexpected failure on the day itself. It is far easier, however, to predict that many in ASEAN will look back on the election day with either quiet satisfaction or lingering regret.

The fate of ASEAN is not in the hands of Myanmar’s electors, but whatever those voters decide, and what politicians then do with that decision, will have an impact on ASEAN as it moves into its post 2015 agenda.

Dr Mathew Davies is a Fellow in the Coral Bell School of Asia Pacific Affairs at the Australian National University.