Let’s start in 1989, when commercial salvage was first legalised in Indonesia. Suharto was President and there were almost no laws in place to protect and preserve the hundreds (some say thousands) of shipwrecks in Indonesia’s territorial waters. The only laws in place dated to the 1930s, and, as the Geldermalsen case demonstrated, they had proved completely ineffective in safeguarding the archipelago’s underwater cultural heritage.

In August 1989, Suharto introduced Presidential Decree No.43 on the National Committee for the Salvage and Utilisation of Valuable Objects originating from the Cargo of Sunken Ships. The Decree legalised the salvage (pengangkatan) and utilisation (pemanfaatan) of valuable objects (benda berharga) from the cargo of shipwrecks (asal muatan kapal yang tenggelam) in Indonesian territorial waters. Salvage was defined as the research, survey and recovery of valuable objects from sunken ships, and utilisation entailed the sale of objects and other uses for the benefit of the Government. The Decree established the National Shipwrecks Committee, headed by the Coordinating Minister for Politics and Security. Committee membership consisted of representatives from at least nine different Ministries.

To salvage a site, a salvage company first had to apply for a survey permit. Given the number of Ministries represented on the National Shipwrecks Committee, this involved extensive bureaucratic wrangling as well as numerous fees. Then, if their survey identified a site of interest, they could apply for a salvage permit, involving yet more red tape and fees. The company was responsible for all costs associated with the survey and salvage process. Foreign salvors could be involved in surveying, salvaging and utilising valuable objects (benda berharga), provided they partnered with a local (that is, Indonesian) company. There were a number of conditions—for example, sites were to be excavated to accepted archaeological standards and Indonesia was to retain unique and scarce artefacts. But these provisions were not enforced. Under this regime, objects from shipwrecks such as the Intan, Belitung and Cirebon, as well as many others, were salvaged and sold. Indonesia had made commercial salvage legal, but was it ethical? For many observers, the sale of objects from underwater was akin to treasure hunting. But others, myself included, understood Indonesia’s commercial salvage arrangements within their context: as an uneasy (and, it must be said, unsatisfactory) compromise that sought to balance the resource-intensiveness of a scientific archaeological excavation with the entirely unregulated treasure hunting that had previously occurred in Indonesia.

Before we move on, it is instructive to consider the way language was used in these laws to constitute underwater cultural heritage in terms of its economic, rather than its archaeological or historical, value. Benda berharga asal muatan kapal yang tenggelam (BMKT), used by the National Shipwrecks Committee and in associated laws, translates as “valuable objects originating from the cargo of sunken ships”. Contrast this with warisan budaya maritim, meaning “underwater cultural heritage”, or even cagar budaya, meaning “cultural heritage” in a more general (and terrestrial, by default) sense. Media outlets, meanwhile, tend to use the phrase harta karun, which translates as “treasure”. The different terminology in use testifies to profoundly different conceptualisations of objects from the ocean.

Skip forward a few years to 1992, when Indonesia updated its colonial-era heritage laws with a new Law and new regulations. This new Law asserted state ownership over cultural heritage (cagar budaya). But provisions were also made, through a new Presidential Decree, for a profit sharing arrangement between the Government and the salvage company (Presidential Decree No.25/1992 on Profit Sharing between the Indonesian Government and Salvage Companies of Valuable Objects Retrieved from Sunken Ships). Recovered objects deemed not to be cultural heritage could be sold, with 50 per cent of the gross proceeds earmarked for the Government and the remaining 50 per cent allocated to the salvage company. Not only did these provisions reduce the likelihood that an object would be deemed to have cultural heritage value, they also placed pressure on salvage companies to recuperate their costs by generating significant profits.

At the same time, awareness of the need to protect and preserve underwater cultural heritage was growing, both domestically and worldwide. In 2001, the United Nations Educational, Scientific and Cultural Organisation introduced its Convention on the protection of the underwater cultural heritage. Twenty years on, Indonesia has not signed this Convention and has no plans to do so at this stage. In Southeast Asia, the only signatory is Cambodia.

In 2010, a decision was made to halt the issuing of all new survey and salvage licences in Indonesia, effective immediately. In November 2011, the National Shipwreck Committee formalised this arrangement with the introduction of a temporary moratorium that suspended the issuing of all new licences to commercial salvage companies. The moratorium was made permanent in May 2016 with the introduction of Presidential Regulation No.44 concerning the List of Closed Business Fields and Open Business Fields with Conditions to Investment. This regulation specified business fields that were excluded from investment, including, at Attachment 1, salvaged objects from shipwrecks—effectively prohibiting investment in the field of shipwreck salvage. Indonesia’s permit system for commercially salvaging shipwrecks and their cargo was over.

But then came the Job Creation Law.

Commonly known as the Omnibus Law, the Job Creation Law seeks to amend 76 laws, with the aim of facilitating business, reducing bureaucracy, boosting investments and, as the title suggests, creating jobs. To implement the Job Creation Law, 49 new regulations (Peraturan Pelaksana) have been introduced, including 45 promulgated by the Government (Peraturan Pemerintah) and 4 by the President (Peraturan Presiden). These regulations have been coming into effect over the last few months.

Article 77 of the Job Creation Law seeks to change Law No.25/2007 on Capital Investment. Of relevance to underwater cultural heritage are the amendments to Article 12 of the Law No.25/2007. These changes render pretty much every field of business terbuka—open for investment—with just a handful of exceptions.

The proposed changes to Law No.25/2007 are implemented through Presidential Regulation No.10 of 2021 on Business Investment Fields. Presidential Regulation No.10/2021 regulates business fields that are open to investment activities. Confusingly, unlike the amended Article 12(2) of Law No.25/2007, which only specifies 6 exceptions to the ‘open for business’ policy, Presidential Reg No.10/2021 specifies 9 exceptions (these include the alcohol industry; the removal of coral or endangered fish; the production of narcotics, chemical weapons or ozone depleting substances; and gambling and casinos.)

In recent days the Indonesian media has been awash with reports on the “treasure” that lies beneath the oceans. Some media reports have estimated the value of Indonesia’s underwater cultural heritage at an astonishing US$12.7 million.

A final observation relates to the involvement of politician Luhut Binsar Pandjaitan, Indonesia’s Coordinating Minister for Maritime Affairs and Investment. Luhut enjoys special access to President Joko Widodo, having once served as his chief of staff, and is believed to have played a key role in the decision to re-open underwater cultural heritage to commercial salvage. The National Shipwrecks Committee still exists, but without powers. Once reconstituted, it will report to Luhut.

Meanwhile, former Minister of Marine Affairs and Fisheries Ibu Susi Pudjiastuti has taken to Twitter to beg President Jokowi to exclude foreign and private investment from recovering “valuable objects” from the ocean, arguing these activities should be solely the Government’s domain. Within government ministries, officials are grappling with the complexity of the new laws, which will require the drafting of additional technical regulations before salvaging activities can commence. They—and many others—are wondering why, after such a long hiatus, underwater cultural heritage is once again being considered as an economic, not an archaeological or historical, resource.

Indonesia is the world’s largest and greatest archipelagic state, rich in maritime history and heritage. Even if the shipwrecks in its waters were a profitable investment (and to be clear, they’re not), we must ask: at what cost? 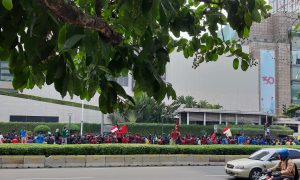