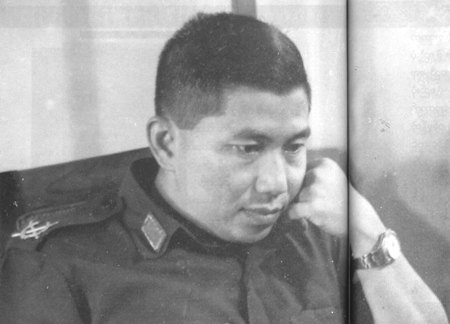 In 1988, during the last months of the Burma Socialist Programme Party’s rule, Brigadier General (Retired) Aung Gyi (pictured above as a young officer; photo taken from a recently published book of interviews with Myat Khaing) wrote a series of letters to General/U Ne Win about the economic crisis, the need for change, and the events fast unfolding on the streets.

Although the letters are often mentioned in books and articles on that year of reckoning, few publications contain text from the letters themselves. The National Library of Australia has recently run off and catalogued duplicates of three of these letters, from 7 March, 9 May and 8 June: the first in English only, the other two in Burmese and English. But New Mandala readers need not come to the Library to read them: a scanned copy of the set (35MB) is available here.