An associate professor at the University of Nottingham Malaysia, Gaik Cheng previously lectured in gender, cultural studies and Southeast Asian cinema at ANU, and was a postdoctoral fellow at the Asia Research Institute (ARI-NUS) in Singapore. She researches cinema and independent filmmaking in Malaysia; cosmopolitan spaces including public eating places like kopitiam and mamak stalls; race, religion and the politics of identity; and multiculturalism. Her publications include Malaysia’s New Ethnoscapes and Ways of Belonging (Routledge 2015), and Reclaiming Adat: Contemporary Malaysian Film and Literature (UBC Press 2006).

Ramon Navaratnam has no compassion 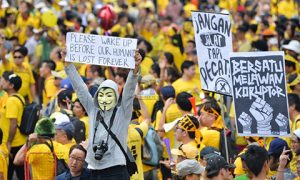 Bersih 4, citizenship and civics in Malaysia

Politics of struggle must become the politics of everyday life.