Su Mon Thant is a Yangon-based researcher specializing in the study of democracy, peace and political institutions with local and international organizations such as EMREF, International IDEA, The Carter Center, and Panna Institute. Su was a Chevening scholar and holds a Master degree in Politics and International Relations with from Keele University England.

Nick Ross is a PhD student at the Coral Bell School of Asia Pacific Affairs at the Australian National University. His research focuses on ethnic politics in Myanmar. He is also a researcher in the Southeast Asia Rules-Based Order (SEARBO) project at the ANU, and a member of the ANU Myanmar Research Centre. Nick has seven years' experience as a researcher and consultant in the field of peacebuilding and democratization, during which time he has worked with the United Nations, national governments, civil society, and non-state armed groups in Myanmar, Afghanistan, Kenya and Colombia. 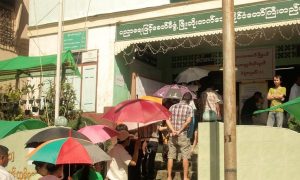 In 2020 the role of the Union Election Commission and election monitoring seems increasingly politicised.