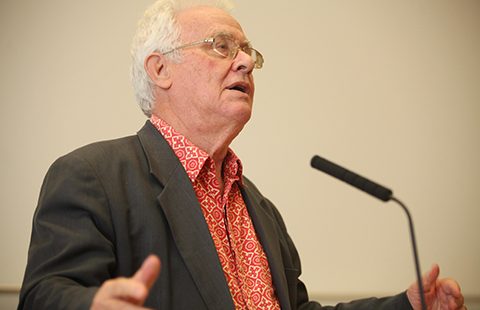 Ben Anderson: the one and only Instead of highlighting his best achievements, I wish to suggest how some of his achievements can inspire Asian studies scholars as they face the challenges of the new century.

For at least the past two decades, Asian area studies has been the target of attacks from multiple directions. Its value and relevance are questioned, often in opposition to traditional disciplines in the social sciences and humanities. Closely related to the debate is the value of language training. Finally, there are issues of ethics and politics of studying Asia.

The work and life of Ben Anderson are immensely relevant to all these issues.

Area studies
Ben Anderson, along with James Scott and Clifford Geertz, are some of the towering figures with long-term dedication to the grounded study of specific locales in Asia, whose outcomes made powerful and lasting impacts across many disciplines. Anderson and Scott took leadership in institutions officially designated as “Southeast Asian studies”.

Colleagues in South Asian and East Asian studies may have a longer list of scholars with comparable reputations, and for whom the debate over trans-disciplinary area studies versus mono-disciplinary traditions would deem silly. After all, the latter often appear to be another kind of area studies, except they are more Euro-America-focused.

The rise and fall of area studies (like that of many disciplines) has always been susceptible to the dynamics of geopolitics, and the changing strategic interests of global major players. As political and business elites shifted their interest away from those they had pursued during the Cold War, Asian studies has fallen victim. Subsequently, blaming the victims follows.

The marginalisation of Asian studies is justified by the pretext that there is something inherently flawed or inferior about it, as opposed to the old disciplines. The dichotomy between the two has often slipped into a caricature of empirically-oriented study of the non-West versus the Holy Grail of an universally enlightening theory-driven mode of enquiry.

Professor of Politics and China specialist Michael Dutton opens his 2002 essay, “Lead us not into translation”, with this question:

Why is it impossible to imagine, much less write, a work like Michel Foucault’s Discipline and Punish within Asian area studies? The impossibility I am referring to is not of content but of form. It is not just about writing such a text but about having it read as something more than a description; having it read for its theoretical significance more generally.

To take that question seriously, one would need to imagine a world without Anderson, Scott, Geertz and the likes. One must also adopt full faith in the universalist promise of the theory of traditional disciplines, and the overall structure of the existing institutionalised academy in the West that supposedly nurtures such promise.

These institutions are assumed to enjoy a high degree of autonomy from external and undesirable pressures.

Anderson’s most famous work Imagined Communities: Reflections on the Origin and Spread of Nationalism (1983), and previously his essay “The Idea of Power in Javanese Culture” (1972) could not have been conceptualised without his admirable mastery of foreign languages, and his brilliant analysis of how those languages operate in a world of unequals.

To him, foreign languages are never simply a tool for accessing foreign persons and materials as objects of study. Rather, they constitute a universe of its own, and key to the ability to see and critically understand the universe invented by one’s own mother tongue.

Anderson’s work has enjoyed the highest respect it deserves among many scholars who run and are formally affiliated with Asian studies and traditional disciplines alike. Ironically, many of the same people undervalue or attack language and literary training in their home institutions.

Despite their rhetoric, funding for Asian language training is consistently reduced to minimum or nil, and so is the amount of such training for students. Language is valued primarily or exclusively for its practical value. The condition of possibility for nurturing a new generation of scholars of Anderson’s calibre is diminished.

Perhaps his was an unusual generation of scholars trained in the 1960s, when pressures of university corporatisation were low, and activist-inclination was globally strong. But even if that was the case, we have not seen many more scholars of his style and stature among his peers.

As professor of government, Anderson was intellectually and politically a defiant. His work does not rely heavily on materials pertaining to formal political institutions and processes (parliament, constitutions, state cabinet, or elections).

Instead, he was strongly inclined to collecting and analysing materials often dismissed by political scientists: novels, caricature, newspapers, pamphlets, television programs and other forms of pop culture.

In his entire career, Anderson was unashamedly partisan, throwing the weight of his great sympathy for the disempowered, occasionally to the point of over-romantising them. His suspicion of the political and economic elite was always blunt, not to mention his disgust of corrupt officials and their cronies.

At face value, many Asianists do similar things. They adopt scholarly jargon and framework in vogue in Anglo-American academy to deride Asia despots, and to speak heroically on behalf of the victims of those despots.

What distinguishes Anderson from most is his continual and radical critiques of the orthodoxy in Anglo-American scholarship, and modern Western logic and rationality more broadly.

For Anderson, the people he studied in Southeast Asia were never merely “imagined communities” for analysis. Since his early visit to Indonesia for his doctoral degree, he maintained deeply personal friendships with a wide range of people. This did not stop, but simply mediated, when Indonesia’s militarist regime of New Order (1966-1998) banned him from entering the country.

There is something poignantly poetic about his passing in the country he studied most, and did so critically and most affectionately.

Ariel Heryanto is Professor at the School of Culture, History and Language, the Australian National University.