Conflict in Myanmar: War, Politics, Religion (Nick Cheesman and Nicholas Farrelly*, eds.) is the most recent output of the continuing Myanmar Update (formerly Burma Update) conference series run by Australia National University. The volume offers seventeen chapters written by native Myanmar and non-Myanmar scholars selected from the participants at Myanmar Update 2015. Centered around the nature of conflict in Myanmar, the book organizes its chapters into three themes of “War and Order” dealing with ethnic tensions in the country, “Elections and After” highlighting institutional politics, and “Us and Them” centering around communal and religious divisions. 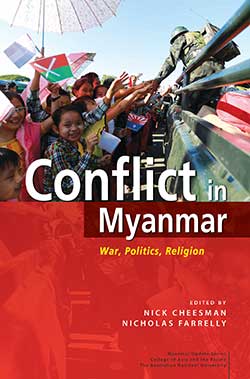 Conflict in Myanmar: War, Politics, Religion joins a array of edited volumes that have appeared in the past few years. Within the Myanmar Update series, it is preceded by Debating Democratisation in Myanmar (Nick Cheeseman, Nicholas Farrelly, and Trevor Wilson, eds.) tied to Myanmar Update 2013 and the earlier Ruling Myanmar: From Cyclone Nargis to National Elections (Nick Cheesman, Monica Skidmore, and Trevor Wilson, eds.) resulting from the Myanmar Update 2011. Beyond the Myanmar Update series, however, there are also other recent edited volumes, including titles such as Constitutionalism and Legal Change in Myanmar (Andrew Harding and Khin Khin Oo, eds.) from 2017; Islam and the State in Myanmar (Melissa Crouch, ed.) from 2016; Metamorphosis: Studies in Social and Political Change in Myanmar (Renee Egreteau and Francois Robinne, eds.) from 2015; and Myanmar: The Dynamics of an Evolving Polity (David Steinberg, ed.) and Burma/Myanmar: Where Now? (Mikaela Gravers and Flemming Ytzen, eds.), both from 2014. Such a supply of edited works reflects a burgeoning academic literature on Myanmar that has grown in the wake of the country’s re-engagement with the larger international community that arguably began with the country’s democratic general election in 2010 and accelerated with the lifting of economic sanctions in 2012-2013.

Edited volumes are useful in terms of providing readers a survey of perspectives on a topic that exemplify the state of scholarship at a particular moment in time. In addition, they allow audiences to note issues deemed to be significant by experts in the field. Conflict in Myanmar: War, Politics, Religion fulfils both these functions, with the chapters serving as a representation of empirical research on major Myanmar conflicts. As a result, it offers appeal to Myanmar scholars intent on staying abreast of events in the country as well as broader audiences seeking to learn more about the forces affecting Myanmar government and society.

Edited volumes are not without challenges. Projects involving multiple authors are vulnerable to two major issues: 1) in hosting multiple perspectives they risk presenting an array of views that can appear incoherent, and 2) in recruiting multiple contributions they are dependent upon authors to write with scholarly quality. In responding to the issue of incoherence, Conflict in Myanmar: War, Politics, Religion follows the approach of other edited volumes by applying a thematic focus that ties its chapters to a common concern. This provides a framework that places the chapters as differing perspectives on the topic of conflict in Myanmar.

It is with respect to the issue of quality, however, that Conflict in Myanmar: War, Politics, Religion is perhaps distinguished from other edited works covering Myanmar. As an outcome of Myanmar Update, the book ties to an ongoing series of conferences that follow an underlying strategy of nurturing scholarship, both for Myanmar as an academic field of inquiry and for Myanmar academics as scholars of standing in global academia. As a consequence, since its origin in 1999 Myanmar Update has accumulated a body of work spanning scholars inside and outside the country able to conduct research of increasing rigor and insight. Conflict in Myanmar: War, Politics, Religion carries the Myanmar Update tradition, with its assembly of contributions constituting a body of empirical studies informed by field work, such that the chapters display an in-depth understanding arising from the immersive experiences of their authors in Myanmar. Most notable in this regard are Ricky Yue’s chapter on the Pa’O Self-Administered Zone and Gerard McCarthy’s chapter on provincial politics in Taungoo, both of which denote immersion into areas not generally frequented or understood by foreigners.

There are possible areas of improvement that should be observed for similar compilations on Myanmar in the future. First, there is a question of internal consistency, in that Myanmar Update ostensibly has a goal of encouraging native Myanmar scholars as a means of capacity-building for an endemic scholarly community seeking to connect to international academia. Conflict in Myanmar: War, Politics, Religion contains four chapters that were authored or co-authored by native Myanmar scholars. This compares with six chapters involving Myanmar scholars in the 2014 Myanmar Update volume, Debating Democratisation in Myanmar, and two in the 2012 Ruling Myanmar: From Cyclone Nargis to National Elections. While author numbers are perhaps only partial indicators of capacity-building, they do provide a continuing reminder of the need to maintain diligence for Myanmar Update’s ulterior goal of promoting native Myanmar research. The insights, for example, by Su Mon Thazin Aung on the ethnic peace process, Chaw Chaw Sein on the 2015 general elections, Than Tun on Buddhist nationalism in Rakhine’s 2015 election results, and Chit Win on the Hluttaw all indicate an intimate knowledge that is made possible by their positions as Myanmar natives residing in the country. These degrees of familiarity offer a nuanced understanding that deserve to be publicized, and signal the value of Myanmar Update’s efforts to support native Myanmar scholarship.

Second, empirical studies by their nature are tied to observations and interpretations of real-world phenomenon. This is useful for identifying and understanding what is happening in a place like Myanmar, but it risks placement of Myanmar scholarship within the confines of descriptive studies. The growth of research on Myanmar into a dedicated field of Myanmar Studies calls for an enrichment in perspectives that can be facilitated by greater engagement with theory. More connection with theory would provide greater integration for Myanmar scholarship into concurrent work in international and comparative studies being done in the law and social sciences, both in terms of potentially deepening analysis of the country as well as offering opportunities for interventions into existing theoretical literature in law and social sciences. The integration of empirical and theoretical approaches require lengthier exposition than possible within the confines of a chapter in Conflict in Myanmar: War, Politics, Religion, but there are chapters—most notably Jenny Hedström’s feminist political economy study of Kachin State and Tamas Wells’ exploration of narratives in communal violence—that present ways to further this in the future.

In sum, Conflict in Myanmar: War, Politics, Religion is a useful ensemble of works that can inform readers and enrich other studies of Myanmar. It serves as a model for other edited volumes on Myanmar in terms of empirical research, thematic organization, and scholarly quality. As such, it should be seen as a necessary addition in any library seeking to promote Myanmar Studies as a field, and as a valuable addition to anyone seeking to improve their understanding of a country still in the process of re-engaging with the world.

*Editor’s note: Nicholas Farrelly, one of the editors of the volume, is a co-founder and editor of New Mandala.

Jonathan Liljeblad is a senior lecturer at the Swinburne Law School, Swinburn University of Technology.