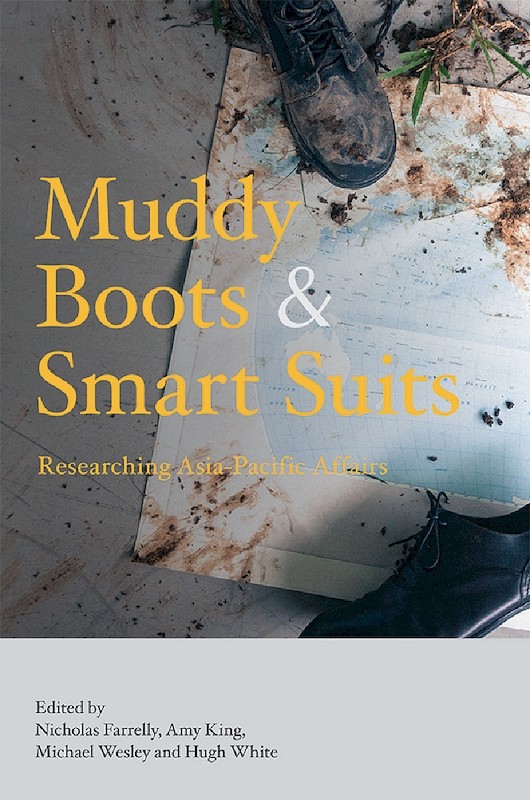 Muddy Boots & Smart Suits is a sprawling volume, containing everything from a plea for the practice turn in international relations theory to an explanation of cross-validation in predictive quantitative modeling to reflections on internet access in rural Myanmar. It is also, paraphrasing the introductory chapter by Michael Wesley, an attempt at reflection on Asia-Pacific studies by researchers with current or past links to the Coral Bell School of Asia Pacific Affairs at the Australian National University. Reading this volume as a big fan of (and occasional visitor to) the ANU, I had the sense that this volume reflects not just a larger conversation that has been happening for decades now between ‘area studies’ and ‘the disciplines’, but also something more special to the ANU.

The book succeeds in showcasing the breadth and diversity of scholarship on Asia and the Pacific within that community. Looking across the volume as a whole, some of the more useful contributions (to the mind of this reader) are those that touch on the policy process, and the ANU’s position as a national university serving Australia itself. There are also some interesting discussions of Australia’s position in the Asia-Pacific region, viewing the country as not just an outside observer but as itself a case.

Readers curious about particular topics or questions will also find much to learn in the individual chapters, which showcase scholars’ areas of expertise in an engaging and sometimes speculative manner. I suspect that this volume’s best use will be as a series of chapters, read individually by students and specialists who find the chapter topics engaging and wish to know more.

This leads me to my main criticism. Taken as a whole, the volume’s weakness is how disjointed the individual contributions are. This may have been inevitable given the volume’s charge, but there are missed opportunities for interesting and productive engagement across chapters that may have led to some more substantial conclusions. Here is one example: the chapter on strategic cultures by Peter J. Dean and Greg Raymond summarises various disagreements between first and third generation schools of strategic culture. Simplifying mightily, one axis in this debate is between whether behavior is just a dependent variable or is both a dependent and an independent variable.  It would have been revealing to put this into conversation with Paul Kenny’s chapter on design-based inference. If the first generation strategic culture theorists are right, what does this mean for a research strategy that requires a strict conceptual separation between causal variables and their effects? Is this tension irresolvable? If so, what’s next?

Another tension is between chapters that express a preference for microlevel details versus those interested in broad national trajectories. Evi Fitriani studies regional alignments in Asia with a conceptual focus on state-level processes. Nick Bisley’s chapter on power also operates at the state level. Contrast this with Cecelia Jacob’s preference for local-level studies of conflict and local-level understandings of international norms, each of which requires a focus on the individual or subnational community level. Should scholars following in Jacob’s tradition find Fitriani and Bisley’s analyses compelling, and vice versa? One argument—which I find overly simplistic—is that this is just a depth/breadth tradeoff. I suspect that the issues are more substantial, and would have enjoyed reading the authors grapple explicitly with them, in direct conversation with one another.

More narrowly, but importantly for the volume’s broader reach, I disagree with two characterisations of Asia Pacific studies in Wesley’s introductory chapter, which for better or for worse frames the entire volume. First, I take issue with the claim that Asia Pacific studies has been ‘remarkably non self-reflective’. It is impossible to list all of the volumes, workshops, seminars, and conference panels devoted to ‘rethinking’ or ‘reimagining’ or ‘refocusing’ the unwieldy body of intellectual inquiry captured under the term ‘Asian and Pacific Studies’, not just in Australia but in North America, Europe, and in Asia itself. There are at least four common themes that can be found throughout the subgenre of self-reflection: (1) the constructedness and artificiality of ‘Asia and the Pacific’; (2) discipline versus area studies; (3) positionality, hegemony, and Orientalism; (4) local versus global and sub-, cross-, trans-, and international studies.

The other disagreement I have is that ‘few methodological or conceptual debates have originated from within the study of Asian and Pacific societies’. The exceptions are just subaltern studies and the rise of great powers. How narrow a view of the contributions of Asianists this is! Just a glance at my bookshelf reveals so many additions. Margaret Mead on Samoa. Benedict Anderson on nationalism. Clifford Geertz on the Balinese cockfight. James Scott on the resistance and the state. Aihwa Ong and Michael Peletz on gender and identity. Chalmers Johnson on the developmental state in Japan. I could certainly go on—that list just reflects my idiosyncratic tastes and interests. These are major contributions by regional experts working on regional issues that have shaped entire disciplinary conversations, each with methodological implications that has occupied a generation of graduate seminars around the world.

The more general observation that emerges from this discussion has implications beyond Muddy Boots & Smart Suits as a volume. Research on Asia is important: the study of Asia and the Pacific has proven to be remarkably generative, providing major concepts and debates in the social sciences and humanities. Muddy Boots & Smart Suits reminds us of the value of self-reflection, and especially of the individual researchers, political incentives, and institutional support required to make these contributions.

Thomas Pepinsky is Associate Professor in Cornell University’s Department of Government, and a faculty member of its Southeast Asia Program.

You can read his other posts on New Mandala here, and follow him on Twitter at @TomPepinsky.