The advertisement at the bus stop outside my house blares the slogan, “Let’s Game Change Climate Change”. The font is bold and ambitious, set against a picture of solar panels floating on a reservoir. My commute takes me past construction site after construction site. The field where cricket teams once practiced on weekends, the small forest that seethed with humming cicadas, have all given way to soaring concrete condominiums with names like “The Topiary” or “The Hundred Palms”. A few stops later, a similar advertisement promises to “Game Change Food Security”, this time featuring a soaring vertical farm. Against this slate of technocratic, supposedly game-changing solutions, Eating Chilli Crab in the Anthropocene offers a refreshing, softer take on how we might live our lives in the age of climate change.

The book is a collection of 12 essays written by students from Yale-NUS College and the National University of Singapore that examine Singapore through the lens of the environmental humanities. At first glance, Singapore might seem like an unlikely source for such a book—we are, after all, a deeply urbanised city with only 0.28% of primary forest cover left. Yet this drive towards rapid urbanisation makes us all the more suited to examining life in the Anthropocene.

The Anthropocene was a term coined in the 2000s, describing the idea that this epoch has been fundamentally shaped by humans. It captures the idea that the influence of humans has grown so much that all of nature has been touched by human activity. The various crises that we now confront—climate change, plastic pollution, pandemics, the sixth mass extinction—are all emblematic of the Anthropocene. The idea of the Anthropocene also brings questions. What do terms like “the environment” or “nature” mean? How do we navigate our relationships with other beings, both human and non-human, with which we share space?

“Game change” implies a significant shift, something that is radical and upends the usual order. Yet Singapore’s response to the climate crisis promises much of the same logic of modernisation and relentless progress which has governed the island since independence. In 2019, Prime Minister Lee Hsien Loong pledged $100 billion to protecting Singapore from rising sea levels. The solutions that this money will go towards sound like the advertisements along my commute. Singapore will build more sea walls. We will reclaim more land. We will use technology to bend nature to our will, and come out of this better than before.

Many of Singapore’s policies are decided on the basis of “pragmatism”, and environmental policy is no different. Pragmatism in Singapore, however, is based on a narrow conception of material gain and economic growth. Our approach to the environment is always inflected with the need to keep economic growth in mind, which sometimes leads to contradictory results. The secondary forests in the Mandai district, home to critically endangered species like the Sunda pangolin, are being cleared to make way for an eco-tourism hub. Construction in the area has been linked with roadkill deaths of animals like pangolins and sambar deer.

In the introduction of the book, Matthew Schneider-Mayerson reminds us that “the direction of the world we’re co-constructing is being determined not by science, technology and policy, but by the desires, values and priorities of those who wield these all-powerful tools”. This is an ethos that runs through the book, with the authors unabashedly forefronting the importance of having an ethic of care to guide us. Against the Singaporean state’s relentless focus on pragmatism, having this book so firmly emphasise the need to care is affirming. Eating Chilli Crab in the Anthropocene is at once a critique of the narrow conception of modernity which has characterised Singapore’s growth up til now, and a call for another way forward.

Two broad themes guide the book, although the essays are not arranged in that order. The first theme deals with the myriad non-human life with which we share Singapore, examining how we think about, live alongside and inflict violence upon creatures such as Sri Lankan mud crabs, Asian small-clawed otters and the Javan mynah. Singapore is hailed internationally as a model for human-wildlife coexistence because of the return of smooth-coated otters to the city’s waterways. However, Heeeun Monica Kim points out that the hype surrounding the otters’ return to Singapore hides the threats faced by other creatures on the island.

The otters are loved and protected because they are a charismatic species, and because of their symbolic value to Singapore’s reputation as an environmentally friendly nation. Contrast this, however, to the fates of other species on our island. The white-bellied woodpecker has been pushed to the brink of extinction due to the construction of a highway through its habitat in Bukit Brown. Long-tailed macaques are frequently culled to keep their population low. No part of Singapore is untouched by human intervention and planning. This means we have to look closely at who is protected and valued, and who is cast aside, and ask if these are inequalities that we can justify.

Questions about who lives and who dies also animate Lee Jin Hee’s essay on Javan mynahs. The Javan mynah is considered an invasive species, with mass killings justified on account of them being a nuisance to humans. Lee challenges the very concepts of “native” and “invasive”, questioning what counts as an ecosystem’s “original” state on a planet that is constantly under flux. This question becomes even more difficult in the Anthropocene, where restoring species and habitats becomes impossible without human intervention. Ultimately, Lee argues that the boundaries of what is considered “natural” are constructed by humans, and used to justify the inclusion and exclusions of certain groups. 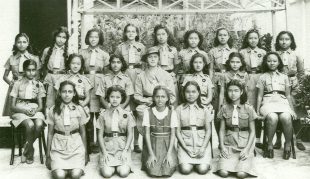 Lee draws a parallel to the rise of xenophobic sentiment around the world, which is increasingly troubling given that climate change is set to cause mass migrations. Singapore, in particular, has a policy of accepting no refugees. Lee contends that there needs to be a culture of care for all life in both conservation and immigration, regardless of how new someone or something is to a place. In questioning the anthropocentric narratives that shape our current relationships to non-human animals, the authors demand that we build an “ethic of care” for non-human others that is not dependent on their worth to humans.

The other theme of the book spotlights the parts of Singapore that are typically seen as beacons of modernity, and calls for attention to their hidden costs and histories. Much like how the concept of the Anthropocene forces us to rethink gains from modern industrial society, the essays here flip the script on the Singapore Story. We know the narrative: Third World to First, no natural resources, against all odds. So much of this story is based on disparaging the past, with founding father Lee Kuan Yew describing an earlier Singapore as a “mud-flat swamp”. Against this, Fu Xiyao’s essay on the Orang Laut communities who were displaced to make way for Semakau Landfill, Singapore’s celebrated eco-landfill, is particularly poignant.

The Orang Laut were indigenous sea nomads who lived around Singapore’s waters. In the 1990s, the last communities in Singapore were relocated from their homes on Pulau Semakau and Pulau Seking for the landfill to be built. Drawing upon ethnographic work and documentaries, Fu describes life on the islands, detailing the Orang Seletar’s sea-oriented culture and subsistence lifestyle. She contrasts this with the culture of consumerism and convenience that has rapidly filled the Semakau landfill, leading to fears that it will run out of space by 2035. In drawing these links, Fu stresses that the numerous environmental crises today need us to pay attention to indigenous displacement and erasure.

Aidan Mock’s essay, Singapore On Fire, traces the history of the fossil fuel industry in Singapore, highlighting how national policy for the past 50 years has worked to foster this industry. Singapore’s developmental trajectory is deeply entwined with oil. Mock argues that climate activists must understand the ways by which Singapore has benefited greatly from the presence of the petrochemical industry, in order to build compelling movements against it.

If Mock’s essay addresses the economic impact of the fossil fuel industry in Singapore, Yogesh Tulsi’s An Oily Mirror examines the cultural and social implications of oil. He argues that 1950s Malay horror films about the orang minyak, a monster often depicted as being coated in black oil, were representative of fears about fossil-fueled modernity destroying traditional ways of life. However, the orang minyak today has largely disappeared from our consciousness, even as oil has become present in every aspect of life. If we are to fully understand Singapore’s role in the climate crisis, we will have to look closely and bring to light our long history of collaboration with the fossil fuel industry.

Eating Chilli Crab in the Anthropocene is not a book that presents concrete solutions or thorough action plans. The book is about radical possibilities, and it more than accomplishes that. My only issue is that at times it slips into an uncomplicated idealisation of indigenous people’s lifestyles as automatically being “in harmony” with the environment. This denies the complex reality of indigenous peoples’ lives, beliefs and practices. Anthropologist Paul Nadasdy has further described how seeing indigenous people in such a light unconsciously retains an imperial perspective that judges indigenous people’s belief systems and actions within a western-centric standard of environmentalism.

Eating Chilli Crab in the Anthropocene presents alternative viewpoints for thinking about Singapore’s developmental story, and these alternatives broaden our imaginations of possible futures. This means discarding old labels and assumptions about the environment being a separate sphere or a special interest for “greenies”. Nature is no longer out-there and untouched, but is instead always part-of and in-the-making. If all of us are to flourish, and not just survive, in the Anthropocene, we will need these new, broadened ways of thinking about the world around us.

Belicia Teo is a Sociology PhD student at New York University. Her research focuses on the sociology of climate change and social movements in Singapore.