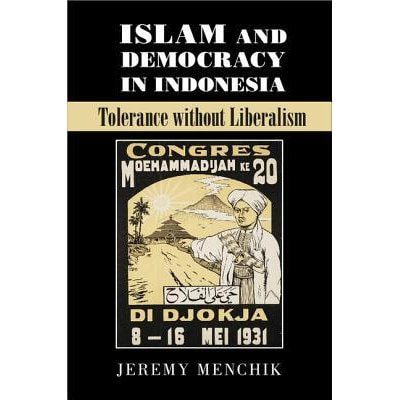 Islam and Democracy in Indonesia: Tolerance without Liberalism (Cambridge University Press, 2016) by Jeremy Menchik is an important contribution to comparative politics and political theory. This book weighs into the debate over whether Islam and democracy are compatible, to the extent that Muslims embrace tolerance as one of their democratic values. Menchik shows that religion can contribute to democracy, and offers a new understanding of tolerance that is different from Western definitions and understandings. By using archival documents, ethnographic observation, comparative political theory, and survey data on members of Islamic mass organizations in Indonesia, Menchik analyses the relationship between religion, politics, and democracy. His research focus is the major Islamic mass organizations in Indonesia: Nahdlatul Ulama’ (NU), Muhammadiyah, and Persatuan Islam (Persis).

Most impressively the book offers a new perspective that challenges the existing literature on democracy and offers new interesting concepts, namely: ‘godly nationalism’ and ‘communal tolerance’.

Indonesia is not a religious state, but a religiously neutral state which embraces many religions and cultures. Therefore, Indonesian governments and society should promote tolerance and religious pluralism and protect the rights of all citizens, as well as preventing discrimination towards minorities. However, this is often not what happens in Indonesia. There is significant discrimination against religious minorities, such as Ahmadiyah and Shia, and many other local religions while, the government and Muslim organisations which otherwise have a good reputation in promoting democracy and tolerance often seem to be reluctant to use their authority to protect minorities. Why does this occur? How do Islamic organizations understand tolerance and practice it? These are is the puzzles that Menchik tries to answer in his book.

Menchik began his research by observing the relationship between Islam and democratic values in Indonesia. He shows that Indonesian Muslim civil society groups support democracy and embrace democratic values. However, as understood by Islamic leaders in Indonesia, these are not liberal democratic values. According to Menchik, the leaders of Indonesian Muslim organizations state that they are tolerant and they are proud of the fact that there are divers religions in their country. However, at the same time, they state that their society is not liberal and they do not want Indonesian democracy to be influenced by liberalism.

Tolerance is one important indicator of democracy. Tolerance,  defined as “the willingness to “put up with” those things one rejects or opposes” (p. 19), is an important solution to problems in the contemporary era, such as conflict, instability and the friction between liberal secularism and the proponents of religious revivalism.

Menchik asks “How do Indonesia’s mass Islamic organization understand tolerance, and how do they envision the accommodation of religious difference in state and society?” (p. 3).  This is interesting because in political science literature, scholars often categorise secular countries as more tolerant. By contrast, when a country is religious or neutral, it may be seen as intolerant.

Menchik’s argument shows that the relationship between democracy and religion in Indonesia is different from that found in some secular countries. In Indonesia, Menchik writes, “religion is central to politics rather than relegated to the private sphere.”  This is important to understand because we need to investigate and embrace “political concepts of tolerance, democracy, and nationalism as they are understood in the global periphery”. (pp 3-4).

Furthermore, Menchik explains why Islamic organisations are willing to tolerate some minorities but discriminate against others. He uses Ahmadiyah as a case study showing that both the state and Islamic mass organizations since the late 1930s have excluded Ahmadiyah and other heterodox religious groups. This is due to an ‘overlapping consensus’ between the state and society.

This exclusion contributes significantly to creating what Menchik calls the “we-feeling” of Indonesian nationalism today. Menchik proposes the concept of “godly nationalism” to understand the complex relationship between religion and nationalism in societies where religion is involved in the public sphere. He theorizes “godly nationalism” as “an imagined community bound by common, orthodox theism, and mobilized through the state in cooperation with religious organizations in society.” (p. 67) This explains why Islamic organisations are willing tolerate “official religions” and not minorities such as Ahmadiyah.

Through his analysis Menchik argues that tolerance in Islamic organisations differs from secular-liberal tolerance as proposed by John Locke and John Rawls, in that it is based on communal, rather than individual, rights. He proposes the term “communal tolerance”  defined as “tolerance based on group rights, legal pluralism, and the separation of religious and social affairs” (p. 124). By using this term, it can be explained why some of the deviant sects such as Ahmadiyah are not protected by the state because they are categorised as heterodox groups and are not part of orthodox or mainstream religions. This is because the “official” religions are in a mutual partnership with the state to define the meaning of tolerance. Mainstream religions monopolize the meaning of tolerance as long as the different communities of believers respect each other. However, the “official” religions tend to discriminate against minority sects within their religions, for example, Ahmadiyah and Shiah in Islam. The state mostly supports this model of tolerance because they need support from official religions to ensure stability and harmony. By supporting the “official” religions’ understanding of tolerance, the state raises its religious credibility and benefits politically.

Menchik’s book contributes a detailed case study to the debate on the compatibility of Islam and democracy in comparative politics, with Indonesia constituting an ideal place to understand the contemporary relationship between state and religion. In addition, as Menchik argues, Indonesia is also an ideal place to understand how Islamic organisations contribute to and support democratic transition and consolidation. The book makes an empirical contribution through its focus on how the leaders of the largest and the oldest Islamic organisations in the world, the NU and Muhammadiyah, understand tolerance and democracy. This has been an important factor during Indonesia’s transition from authoritarianism to democratisation in the post-Suharto era; Menchik provides an example of how to understand the relationships between the state and Islamic organisations by combining historical data and contemporary survey analysis.

Finally, Menchik’s new concepts of “godly nationalism” and “communal tolerance” contribute to the terms of political theory, in which scholars should consider the importance of ideas that non-secular countries generate in debates about the state, religion, and democracy. The concept of “godly nationalism” can be considered a third way in debates about secular nationalism and religious nationalism. Meanwhile, the concept of “communal tolerance” will enrich political vocabulary beyond secularization theory and the clash of civilizations’ debate, revealing another model of tolerance as practiced by Muslim organisations in Indonesia.

This book contributes to comparative politics and political theory, but it has some shortcomings. Firstly, the concept of “communal tolerance” can be ambiguous when it is implemented in multicultural countries such as Indonesia. It can provide legitimacy to the supremacy of majority groups over minority and heterodox religious groups:  some fundamentalist groups might use this concept as justification for repressing their competitors, claiming that group rights  must be prioritized above individual rights.

Secondly, when Menchik proposes three determinant factors that influence Islamic organisations’ attitudes of tolerance, he does not mention the political orientations of the leaders of Islamic groups or how deeply some radical ideas may have infiltrated Islamic organizations. Both factors are very important because, especially in the contemporary era, some Islamic leaders use religious issues to threaten or defeat their competitors in politics, building coalitions with radical groups as long as it will benefit them politically. As Nancy Bermeo (1997) argues, the transition of democracy can be successful if radical groups do not dominate electoral politics.

Above all, this book should be studied further because it makes theoretical and empirical contributions to comparative politics and political theory field. This book shows how Islamic leaders from the Muslim majority country understand tolerance and democracy in ways distinct from the common understanding in Western countries. Importantly, Menchik reveals how Muslims agree with tolerance and democratic values but adapt and understand these concepts based on their socio-religious preferences and political considerations.