This book, about accidental and unnatural death in late nineteenth-century Bangkok, begged to be written, not because of the heartbreaking deaths in its pages, but because of its account of extraterritoriality, how it functioned and whom it affected. In 1855 the European imperial powers pressured the Siamese court to accept the terms of the Bowring treaty, one of which granted them jurisdiction over their legal subjects who resided in Siam. These subjects could be European, in this book mostly British, or in the parlance of the time they could be “Asiatic”, meaning Indian, Chinese, Malay and even Siamese. The cases of these subjects, known in the archive as protégés because extraterritoriality protected them, were tried not in Siamese courts but in European consular courts often criticised in the local press for awarding extravagant compensation to the subjects. The extraterritorial arrangements created inequalities that impinged on ordinary lives in treaty port Bangkok.

In historical writing in Western languages and especially in Thai, the modernising reforms during the fifth reign (1858-1910) crowd out the dramas taking place in the consular courts where cases of accidental and unnatural death were adjudicated. Pearson puts to one side the familiar narrative of legal reforms that preserved elite privilege through the codification of positive law. Building on the work of Hong Lysa, Tamara Loos, David Engel and others, he pieces together with consummate skill a new narrative of the legal subject from archival fragments. His research leads him to police reports and witness statements of accidental death, autopsies, inquests, and the testy correspondence of British attorneys and physicians some of whom had investments and business interests that conflicted with their official positions. One foreign physician was employed by the British legation as well as by the Siamese government, another potential conflict of interest in a treaty port short of foreign expertise.

In 1887 the Siamese government granted a concession to two Danes to form a limited liability company to operate trams in Bangkok, and the accidents caused by the tram cars operated by the Bangkok Tram Company offered Pearson a rich source of material. Tram cars were lethal; people were accidentally crushed to death or maimed on the tracks. Passenger rail travel in Europe gradually brought about a new ordering of responsibility for accidental death, and issues of negligence and carelessness had to be resolved. Western assumptions about risk and liability gradually took root, and several chapters of the book concern liability for accidental death and injury as the process of determining responsibility moved from the executive authority of the Minister of the Capital to the consular courts. A transition began to occur from inauspicious death, where the family of the deceased was offered compensation for a “bad” death, to suspicious death caused by negligence or carelessness. Pearson explores the vernacular metaphysics of khwan in the Siamese belief system, a term for life essence distinct from the person that he declines to translate. Karma is mentioned once in the book.

The first documented case of unnatural death to receive an autopsy occurred in 1896. Examination of a corpse had shifted from the site of death or the police station to the morgue; a chain of custody of the corpse was now required for the autopsy reports. The foreign legations distrusted the evidence submitted by Siamese subjects on the grounds it might be compromised by political allegiances or diminished by Siamese medical credentials, forcing the Siamese state to hire a foreign physician to perform autopsies. In the plural legal environments created by extraterritoriality all litigants had to conform to standards of evidence and a new medicolegal language that came from Europe. Pearson’s major interest is how the conflicts over acceptable evidence and the adjudication of legal liability led to the development of a distinctive legal subject that emerged as the Siamese constructed its new legal regime. But this new legal subject was one without rights as would have been the case in Western law. 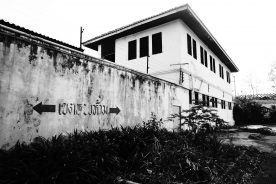 Pearson could have dispensed with some of the signposting typical of dissertations. There is repetition, and some points are documented to death. Not every reader coming to the topic anew will be familiar with extraterritoriality whose clearest definition appears very late in chapter 5. But Pearson is a fine writer, at times an elegant one, and he has made so much of the fragmentary record he discovered that he has taken this splendid study well beyond a simple tale of courtroom battles between the Western powers, the Siamese state, the Bangkok Tram Company, and foreign litigants. His curiosity has led him to read up on actor-network-theory, the history of the legal subject in Western liberalism, and death studies. He comes upon necropolitics, a term that informs the book’s title, in work by Achille Mbembe and a study of Siberian Buddhism.

As many historians of Thailand have endeavoured to do, Pearson chips away at the nationalist claim that Thailand was never colonised. Semi-colonialism, which is how Siam’s compromised sovereignty is often characterised, has become a slogan that does not do justice to the inequalities of the extraterritorial treaties. Colonialism where? Whose colonialism? The semi-colonial moniker was originally applied to the East Asian treaty ports. Pearson resorts to the label a few times but prefers “diminished” or “constrained” sovereignty to describe the effect of the treaties on the Siamese king’s ability to rule his subjects.

More to the point, Pearson’s impressive reading leads him to compare Siam to China and the enclave colonialism in treaty ports like Shanghai and Tienjin, rather than to the colonialisms that had taken hold in Siam’s neighbouring kingdoms. In Siam, where imperialism privileged European and “Asiatic” subjects, jurisdiction was demographic and defined by legal subject. In the treaty ports it was defined by territory. Pearson has sketched a distinctive legal environment among many others in the colonial world at the turn of the nineteenth century and has shown that the treaty port is the most useful lens through which to compare Siam with other parts of colonial Asia.