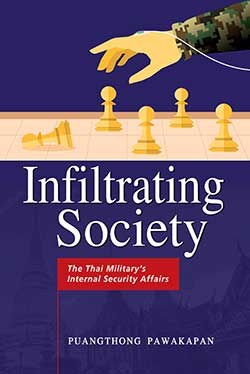 Militaries around the world use infiltration tactics to gain advantages over their enemies. The Thai military is no exception—but with one distinct difference. The Thai military does not want advantages in the battlefield, but in the political arena. Moreover, the enemies are not foreign nation-states, but the very Thai people themselves.

Puangthong starts by discussing the main function of the Thai military. She argues that ever since the Thai military was modernised by King Rama V, the military has had little experience fighting inter-state wars but much experience in suppressing its own citizens. Historically, the military has used armed suppression to quell civilian resistance, whether millenarian rebels during the reign of King Rama V, Muslims in the deep south or the Communist Party of Thailand during the Cold War.

However, Puangthong shows that the Thai military learned in the late Cold War era that armed suppression alone was not efficient in securing political order. It is for this reason that the military began to indoctrinate people to accept the military’s control over politics and forget alternative regimes.

By the word ‘infiltration’, Puangthong does not only mean that soldiers are disguising themselves and spending time or spying among civilians. Infiltration includes every military project which contributes to the expansion of the political domain into civilian society. The Thai military has established various ways of doing this: village development projects, community groups and mass organisations, military scholarships, and paramilitary intelligence units.

At first glance, these infiltrations do not seem anti-democratic because they wear a legitimatising cloak—for example, disaster alleviation or peace and reconciliation projects. Through such projects however, civilian participants are taught to obey authority, respect the monarchy and cooperate with the government, and are re-educated to believe that the military’s involvement in politics and civilian affairs are necessary. These projects are attempts to convert civilians into the military’s propagators, who ideally recruit more people, spreading the infiltration widely and quietly like a virus.

The infiltration examples examined in this book warrant further research as they are often overlooked. When it comes to state indoctrination channels, literature usually focusses on media and schools. However, the Thai military’s infiltration is often more covert. It extends to rural areas and the borderlands far from the spotlight. Sometimes it is disguised under bureaucratic organisations such as the Ministry of Education, the Ministry of Interior, and the Ministry of Natural Resources and Environment. It may mask itself under the promotion of minority religious community groups, such as Catholics, Muslims and Sikhs.

Although these infiltrations are covert, the number of participants is not at all low. The Volunteer Defence Corps claimed to have 25,000 members in 2018, while the Village for Development and Self-Defence Volunteers program had been established in 14,000 villages across the country by 2017. In 2011, the Thai National Defence Volunteers reported that they had 200,000 members.

Despite the proliferation of the military’s infiltrations, Puangthong still has hope for Thailand’s democracy. She notes that the number of participants in the military mass organisations and programs does not necessarily reflect the success of the infiltrations, because people may be forced to join against their will. The number of participants may also be overestimated, since a person may be forced to participate in more than one program. Puangthong points out that instances of the military turning to violence as a last resort, such as in the cases of the Thammasat University Massacre in 1976, the crackdown on red shirts in 2010, and perhaps also the People’s Party Movement today, are all proof that infiltrations cannot win the hearts and minds of Thai civilians.

Although the list of books and journal articles cited in Infiltrating Society is rather limited, Puangthong instead provides readers with a long list of archives, government reports, military orders, and newspaper clippings. Online evidence including websites, video clips, and social media posts and pages are referred extensively in the book as well. These informal sources, although potentially ‘less academic’ in the eyes of some scholars, help the readers to see what is actually happening on the ground. This evidence is quite useful considering that the nature of the military’s infiltrations often elude public attention. The difficulties which forced Puangthong to use such informal sources also reflect that further research on the military’s infiltrations is welcome.

There are a number of works studying individual mass organisations, which are a part of the military’s infiltrations (e.g. Bowie 1997, Hyun 2014 and 2017, Ball 2004, Ball and Mathieson 2007). But while these works are very insightful, they require a broader work to link their contributions together and offer a holistic view of how the infiltrations affect Thai politics. Infiltrating Society is that missing work. The book illustrates how deeply the military has infiltrated civilian society and the impacts on Thailand’s civil-military relations.

Further study on the Thai military’s infiltrations is still needed nonetheless, because since the 2014 coup the military has introduced various new modes of infiltrations and indoctrinations, such as the Royal Volunteer Spirit Programme, Information Operations, and ROTC New gen (Ror Dor New Gen). Research on these new infiltration programs will complement Puangthong’s work, since one book cannot extensively cover the history of indoctrination in Thailand alone. Pasit Wongngamdee is a lecturer in the Faculty of Political Science, University of Ubonratchathanee, Thailand. He is currently on a leave for his doctoral degree at the University of Canterbury, New Zealand. His interests includes morality, political culture, ideologies, conflict and violence in Thai politics.