The Atoni Pah Meto (or Meto), ‘the people of the dry land’, are the most numerous of the ethno-linguistic groups living in West Timor and they live in the only district not a contiguous geographical part of Timor-Leste. Unlike most accounts of the Meto, whose primary concern is with those Meto living in the more urbanised lowlands who have been subject to decades of influence from Dili, this impressive study directs close attention to the culture of the highlander people (the atoin nu’af). They are swidden farmers living in a rugged habitat, and when they leave their homeland for the plains they must accommodate to alien values emanating from Dili, whose ultimate source lies in the global domain.

The dynamic engagement between indigenous (or ‘familiar’) values (meto) and foreign (kase) provides this book with its most prominent motif and shapes the narratives of individuals portrayed with appealing sympathy by the author. By giving us glimpses of the personalities of persons whose lives he has obviously enjoyed sharing, the author assesses how the conceptual ‘space’ where meto and kase conjoin shapes individual lives and helps define the identities of persons and their social groups. This space the author terms “crossing”, an allusion perhaps to the novels of the Timorese writer, Luís Cardoso, whom the author cites. In this crossing between the indigenous values (meto) of the highland people and global values (kase) the atoin nu’af find themselves in an economic system that prizes cash, and in which they have to respond to political concepts and a legal authority that relentlessly issue from the State. This is not the world bequeathed them by their spiritual ancestors, yet Dr Rose reveals that the ancestors still play an important role in helping their human kin adjust. 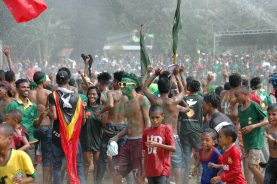 These two value systems have interacted for some years, so by now their intersection may be considered a defining feature of contemporary Oecussi society. In this new world atoin nu’af find themselves undergoing what the author calls a “reflexive encounter” as their indigenous experiences and foreign modes of thought meet and highland migrants engage “with the global in new and unfamiliar ways” (page 28). With a wealth of detail Dr. Rose fills lacunae in our understanding of the least ethnographically known of Timor-Leste’s thirteen districts. And at the same time as augmenting Meto published ethnography, he employs to illuminating effect a theoretical insight devised by the Portuguese anthropologists, Susana de Matos Viegas and Rui Graça Feijó, to more accurately understand what can happen when divergent values systems converge. As an alternative response to syncretism they have suggested another analytical perspective which they have termed “cohabitation”.

In seeing the applicability of the concept to Oecussi, Dr. Rose convincingly depicts how atoni nu’af desirous of staking out a claim upon the enticing opportunities that have become accessible to them in the kase world use what he characterises as social and spiritual “frameworks” embedded in their atoni nu’af traditions. So, far from jettisoning their adat when they come down to the lowlands, they retain their trust in the authority of ritual to evoke the power that lies with their ancestors in the spiritual realm. Spiritual agency, in other words, functions as an enabler for ambitious persons striving to realize newly discovered, globally-inspired, dreams.

Indigenous Spirits and Global Aspirations in a Southeast Asian Borderland is a splendid addition to the published literature on Timor-Leste. It has been conceived with considerable empathy by a knowledgeable fieldworker very much engaged in the personal experiences of individuals who—unusually in an ethnography—are brought to life on his pages. As a notable contribution to Timorese scholarship, Rose’s book takes its place besides other authoritative works on the district like Hans Hägerdal’s history of the colonial rivalries and the works of Andrew MacWilliam, Laura Meitzner Yoder, and Victoria Sakti.