The field of trauma studies has seen an explosion of scholarship in the last twenty years. However, especially for Western audiences, the focus of study has been almost entirely on European and American experiences with trauma in the two world wars and the Holocaust. The experiences of Asian soldiers and civilians in various settings have been largely overlooked in the Western world. A major step in rectifying this has been made by historians Mark Micale and Hans Pols, whose new collection of essays is a significant achievement that introduces a global approach to trauma studies, illuminating encounters with man-made and natural disasters in Southeast Asia, Korea, Japan, Taiwan and China during the twentieth century. By globalising trauma studies, Micale and Pols break new ground and enrich our understanding of the complex ways in which humans respond to war, genocide and environmental catastrophes.

The authors reveal the ways in which the diagnosis and treatment of trauma through the lens of Western-centric models of thinking, especially the concept of PTSD (Post-Traumatic Stress Disorder), has profound limitations. The diverse range of scholars in this volume uncover the individual, more subjective ways in which trauma is conceptualised in different Asian communities. The tensions between dominant (Western) concepts of trauma and regional particularities are a unifying theme in this volume, which illuminates why it is important to study Asian experiences with trauma on their own terms rather than simply through a Westernised lens. The history of trauma in Asia does not simply parallel Western psychological experiences with violence uncovered by European and American scholars. Instead, particular expressions, treatments and experiences with trauma in Asia, if incorporated into the scholarship, can broaden our knowledge of the complex ways in which individuals process, narrate, and treat different forms of stress.

The individual chapters in Traumatic Pasts in Asia provide nuanced analysis in a wide range of case studies of encounters with violence. The first chapter, by Harry Yi-Jui Wu, explores how the ways in which ‘traumatic shock’ have been defined and treated in the wake of earthquakes and storms in colonial Taiwan. Wu demonstrates how the history of medicine, colonialism, military history and environmental history are intertwined in shaping how doctors approach the psychological effects of natural disasters. Eri Nakamura’s chapter looks further at how cultural particularities, especially notions of gender, race and class, shape the diagnosis of mental illness, in this case in traumatised Japanese soldiers in the Second World War. Nakamura demonstrates that Japanese military psychiatry both overlapped with and diverged from Western approaches to psychiatric illness. In some ways, the overlap between Asian and Western concepts of trauma is striking, as in the case of Japanese doctors who relied on German medical theories to categorise and treat ‘hysteria’ and determine whether survivors of the atom bomb attacks should get a pension, which is the focus of Ran Zigenberg’s chapter. As Jennifer Yum-Park also demonstrates in her study of South Korean doctors’ approaches to mental illness during the Korean War, Western approaches, in particular Freudian theories, ‘colonised’ Korean psychiatry.

While there were many cases in which Western thought decisively shaped approaches to psychiatric medicine in Asia, there were also a number of instances in which doctors were critical of American and European concepts. As Narquis Barak shows in a fascinating chapter based on interviews with Vietnamese psychiatrists, the PTSD diagnosis had only limited impact on how doctors conceptualised mental illness in soldiers. PTSD was considered too narrow, and Vietnamese doctors instead emphasised the subjectivities of their patients who were experiencing complex symptoms. The subjectivities of traumatic experience and memory also play a central role in Vannessa Hearman’s analysis of letter writing between Indonesian women imprisoned in the anti-communist purges during the 1960s. Finding therapeutic support through their letter-writing, these women were able to regain a sense of self-worth in the wake of traumatic experiences. Hearman’s chapter builds on innovative new approaches to epistolary culture as an essential therapeutic tool for individuals coping with stress. 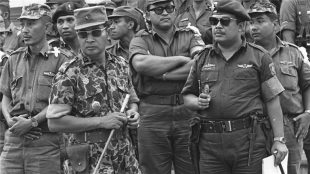 A number of chapters explore the often hidden languages for narrating trauma in various Asian communities, with sensitivity to complex cultural influences on how trauma is remembered outside the spheres of psychiatric medicine. Caroline Bennett uncovers how narratives of haunting provided a means for individuals to process trauma in post-Khmer Rouge Cambodia. Offering a unique glimpse into non-verbal expressions of trauma, Hua Wu reveals how in complex social relationships and carefully constructed spaces, youth who experienced re-education in China’s cultural revolution provided mutual emotional support. Dyah Pitaloka and Mohan J. Dutta provide engaging analysis of survivors of the 1965 Indonesian mass killings who find a way to heal and overcome stigmatisation through the performance of song. These innovative ways of investigating how ordinary people cope with trauma enhance our knowledge of how individuals heal beyond the influence and control of states and medical authorities.

The difficulties inherent in analysing subjective language and rituals used to deal with trauma are sensitively analysed in Seinenu M. Thein-Lemelson’s study of survivors of the Burmese democratic movement, providing readers with a glimpse into customs otherwise invisible to the outside world. Maki Kimura demonstrates how in Asia, subjective memories are stifled in ways that echo tensions found in Western sites of memory. Placing Asian-Pacific war memorials in a larger global context of problems with memory-building (with comparisons to Holocaust memorials), Kimura highlights the limitations of state efforts to build collective memory, and difficulties in coming to terms with experiences of sexual violence and genocide.  Synthesising some of the larger themes of this book, Saiba Varma, in her discussion of trauma symptoms found in colonised populations in Kashmir, emphasises that the PTSD concept glosses over the more complex, subjective experiences of trauma.

This well-written, engaging, interdisciplinary volume moves the field forward by building a bridge between Western and Asian scholars. Traumatic Pasts in Asia is thus a crucial step in carving a path towards a more global approach to understanding traumatic injury. It identifies where Western-centric conceptions of trauma are problematic, while it also explores universal patterns and experiences, including tensions between state and individual conceptions of traumatic memory. This book should spark interest and ongoing discussions among scholars, policy-makers, and members of the public whose lives have been shaped by the traumatic legacies of mass violence.