One of the surprises of East Timor’s July parliamentary election and the subsequent wrangling over the formation of a new government has been the role played by a new force in Timorese politics: the KHUNTO Party. KHUNTO, an acronym that stands, in translation, for Enrich the National Unity of the Sons of Timor, was one of two parties to gain seats in the parliament for the first time, winning 6.4% of valid votes and five seats—enough to give it a critical role in the formation of East Timor’s new government. In September 2017 it exercised this role dramatically, defecting from a deal it had previously been negotiating with the FRETILIN party (the first-placed in July’s election) and thus destroying new Prime Minister Mari Alkatiri’s parliamentary majority—a move that might lead to the collapse of the FRETILIN government, new elections, or both. Even before this dramatic denouement, KHUNTO had sparked curiosity among observers of East Timor’s politics. While the rise of another new party, the Popular Liberation Party (PLP) led by former president Taur Matan Ruak, was widely predicted, KHUNTO is less well understood. Unlike other parties winning seats in parliament, KHUNTO is neither linked to an organisation that played a leading role in the struggle for independence against Indonesian rule, nor led by a prominent older-generation leader of that struggle.

Instead, KHUNTO draws support from members of a number of martial arts groups, especially the Wise Children of the Land (KORK)—headed by the husband of KHUNTO’s leader—and from associated family networks. Martial arts groups are an important social institution among young people, especially young men, in East Timor. They provide companionship, recreation, and an outlet for masculine identity. Accordingly, some observers spoke about KHUNTO being the party of disenfranchised youths—especially unemployed youths in Dili and other towns.

In fact, exit polls and voting results show that this story is only partly correct: while it is certainly true that KHUNTO is disproportionately supported by young voters, the bulk of its vote came from rural areas. Moreover, a large part of its appeal can be attributed to a cultural practice borrowed directly from the quasi-mystical culture of the martial arts organisations, and of rural Timorese society: KHUNTO supporters took juramento (blood oaths) stressing their loyalty to the party and inviting misfortune should they betray it. These oaths, from the perspective of party leaders, were an effort to lock in their vote and prevent poaching by other parties. From the perspective of supporters, they signified that KHUNTO was more than a mere political vehicle. Instead, through these oaths KHUNTO supporters bind themselves together as kin, becoming like brothers and sisters who swear to help each other out in times of financial or personal hardship. Such rituals tap into a rich vein of mysticism in Timor. Traditional animist beliefs are practiced in tandem with Catholicism, or syncretic versions of both. One still-active group, Seven-Seven, for example, inserts a potion under their skin in the belief that it gives them magical powers such as shape changing and invisibility. There are stories that even the KHUNTO leader himself has claimed to have met the archangel Gabriel and to have received a secret language. Photos of him have emerged on social media dressed in a priest-like cassock initiating new KORK members (one of them was a government minister).

What’s fascinating, however, is how this traditional culture of oath-taking meshes in KHUNTO’s appeal with a very contemporary feature of Timorese life: corruption. Over the last decade or so, a pattern of clientelism has overtaken government in East Timor. The government of Xanana Gusmão has distributed jobs, public office, contracts, projects, scholarships, and other material benefits, treating them as a glue to hold together what might otherwise have been highly fragile coalition governments. One reflection of the new politics has been a series of corruption scandals that have rocked the country. One of these scandals claimed the prize scalp of the Finance Minister—although she hotfooted it to Portugal for medical treatment and never returned. There has also been sustained anger over life pensions for politicians and the sale of government cars to parliamentarians at knockdown prices, leading to a number of widely reported demonstrations.

Many people in rural areas know about high-level corruption, and they also can see people around them benefiting from family or other connections to officeholders, while themselves lacking the personal links or social leverage to make similar gains. Growing perceptions of corruption are thus not always connected with sophisticated understandings of the rule of law and administrative order, but instead reflect people’s daily observations that others are benefitting while they are not. In several interviews we have conducted since the election, KHUNTO party leaders and activists have repeatedly stated that much of the party’s appeal derived from the strategy to defeat corruption they offered to voters. More specifically, the party’s use of juramento, they say, offers a uniquely effective cure to the problem. Not only are ordinary members bound to the party by oaths, but elected officials from the party will be bound to reject corruption by the same method. Indeed, should the party ever gain control over government, all public officials will be required, they say, to take juramento threatening them with punishment should they steal the people’s money or otherwise betray their trust. As one of our informants put it, oaths on the bible, such as those already taken by MPs, are not effective: God punishes only in the afterlife, while “Timorese culture” will punish the oath-breakers in the here and now—through illness, death or other misfortune.

This conjoining of opposition to corruption and the juramento was, as one KHUNTO activist put it, the “core of our program”. A district coordinator for the party explained that KHUNTO activists did not even bother to explain the details of their policies on health, education and similar matters when trying to win over voters, in part because they knew they could not compete with established parties on such grounds. Instead, they offered an approach based on “trust”. “Do you trust us”, he said they would ask voters, “to keep our promises?” Voters could do so, he assured them, because of the juramento: “In East Timor, there is a lot of corruption because they government isn’t able to control it. We have a way to provide that control. If you vote for us, our people will be sworn, and if they break their oaths they will be punished”. KHUNTO is interesting, thus, not only for how it represents a fusion of Timorese tradition and democratic politics, but to how it points toward social and political tensions that may be eroding the foundations of Timor’s political community. Though liberation-era leaders and parties continue to wield enormous popularity and influence, there is also growing awareness among many ordinary Timorese of the disproportionate personal benefits being accrued by those in office, and by their family members and other associates. Some Timorese apparently see the juramento as a solution to such problems, and as a means to assert popular control over a government apparatus which they see as becoming increasingly remote and venal.

Of course, this does not mean that such an approach is likely to be effective. According to one high-placed party leader, 89,000 persons pledged their support to KHUNTO by taking oaths but on election day the party got under 37,500 votes. This result means that even many in KHUNTO’s immediate circle were apparently unconcerned about the misfortunes that threatened them should they break their oaths. There is also little reason to expect that KHUNTO’s leaders would themselves abjure patronage politics should they come to office. On the contrary, it is possible to read in KHUNTO’s internal emphasis on egalitarianism, familialism and sharing a hint that what many Timorese seek when they criticise corruption is not so much a remaking of the political order, but rather a share of the benefits they believe are going to people outside their own social networks.

Timor’s political situation is now in extended flux, and may not be resolved until March 2018 if the option of new elections is taken. Regardless of what happens next, after over a decade of dominance by the two main parties FRETILIN and the CNRT, KHUNTO has certainly made Timorese politics interesting again.

All photos taken by the authors during the 2017 Timorese legislative elections. A look back at Rosa "Muki" Bonaparte Soares' life of anti-colonialism and feminism, cut short by Indonesian occupation. 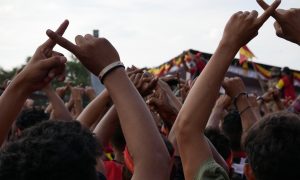