“Magandang gabi, bayan,” a Tagalog phrase that directly translates to “good evening, nation” is a phrase that has been tightly linked to broadcaster Noli de Castro. For the past three decades since 1987, except for a few years interlude when he was Senator and Vice President of the Philippines, de Castro began and concluded the primetime newscast TV Patrol with this energetic greeting.

But who is de Castro referring to when he addresses “bayan?” Is there a preconstructed public that he is speaking to, or, in the process of greeting the nation, is he creating an image of a community brought together by the shared experience of collectively witnessing the news? 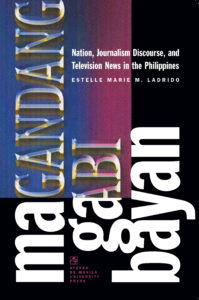 In the book Magandang Gabi, Bayan: Nation, Journalism Discourse, and Television News in the Philippines, media studies scholar Estelle Marie M. Ladrido exposes the what she refers to as the “taken-for-granted relationship of news and nation” (p. 3).  She investigates the complex procedures of news production by comparing government television and commercial television networks.

Her data is based on an ethnographic approach, spending six months conducting non-participant observations and accentuated by some key informant interviews with news workers from both programs.

The interviews along with the non-participant observations provides not just a clear view of news production of the said programs, but also a first-hand account of the negotiations done before the news reaches its audiences.

Magandang Gabi, Bayan argues that there is a shortcoming in local journalism scholarship when it falls into the trap of mediacentrism. Drawing on the work of Nick Couldty, mediacentrism is the status given to media as a social reference point, producer of ideology, among others.

Ladrido overcomes this by drawing on Nick Couldry’s concept of media rituals, along with Michel Foucault’s concept of governmentality in analyzing the cases of both PTV-4 and the commercial news program.

Both commercial and government-owned channels that Ladrido studied actively works towards giving the best kind of news for the Filipino audience. She finds that selecting the topics to be aired is a relation of power. The mediation of the nation by news workers is then “conditioned by the immediate material context of news production” (p. 133).

This leads to the value of mediating the nation in news production. News organizations mediate the nation by always reminding the audience that what they present is the “nation-on-the-news”. There is, however, the problem of confusing “the nation” to the capital Manila. News, as Ladrido finds, is Manila-centric, giving little airtime for regional news. With this, the notion of “nation” that news programs are trying to achieve becomes problematic, since a big chunk of airtime is allotted for Manila-centric news.

How does this book become more and more relevant in the Philippines?

One can think of the recent situation of the NutriAsia workers strike where workers demanded wages they did not receive. Horrific images of bloodied workers who suffered from police brutality went viral over social media, resulting in massive public uproar and a campaign to boycott NutriaAsia products.

What made this case especially controversial, however, is the way some mainstream television programs told this story to the nation. One media coverage during the NutriAsia workers strike omitted the name of the company because it is a sponsor of the commercial network’s program. We can infer here that if the news program exposed the company, the sponsorship to the network might be removed, and hence, losing profit.

Ladrido’s analysis is useful in making sense of contemporary issues like labour strikes. In the book, she demonstrates how news workers are also market actors who sell and pitch segments to news executives. News should be audience-friendly, which means including the language used and the content that news workers imagined for their audience. One instance is specific news programs for audiences that have difficulty understanding English. And since the evening news programs are the ones being watched by all classes, the news is presented in Filipino.

This is where the issues of public service, audience construction, and contested autonomy enter into the discourse of power relations inside the newsrooms.

Ladrido gave space for each category in the last three chapters of the book. Going into the particularity of the commercial news program, news workers have to consider the ratings of their program. But Ladrido finds that ratings are not everything.

In Chapter 6, she argues that news workers have some autonomy as far as choosing which topics to be submitted to executives for approval. 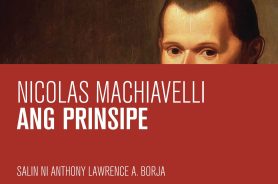 Through Machiavelli’s eyes: on leaders, citizens, and Philippine politics

What are the challenges and lessons of translating Machiavelli’s ‘The Prince’ into Filipino?

This level of autonomy is managed in the context of constraints such as budgeting for the government side and competition for the commercial news program side.

While commercial news workers are free to pursue news they want to be aired on news programs, it is subject to some factors such as exclusivity—whether the program is the first to have coverage, popularity—if it is a trending topic on the news, and the approval of the news executives, among others.

Ladrido pointed out some concerns of news workers she interviewed that news is given more priority if the program gains exclusivity. And if there is an exclusive report, some of the news in the list to be aired might be moved to other slots or to other news programs of the network. Pushing this further, news workers tend to pursue exclusive reports other than pursuing other topics in order to gain more airtime on the program, hence the competitive notion inside commercial news programs. Interestingly, one news worker told Ladrido that this is a “healthy” competition amongst workers.

At a time when the legitimacy of news production and consumption is increasingly questioned, Ladrido’s book serves as a potent reminder that as news is constructed, so too is the concept of the nation.

Samuel Cabbuag is an instructor at the Department of Sociology, University of the Philippines Diliman. He took his BA and is finishing his MA degree from the same department. He tweets at @samuelcabbuag.