A lot has been written about how and why the Philippines is the global source of contractual workers—from nurses to domestic helpers, from construction workers to IT professionals. Roderick G. Galam situates his work in the migration scholarship by explaining how land-based workers and their families have always been the focus of migration research, and how there is thus is a need to also explore the side of workers in the global maritime industry, and particularly their wives who stay behind.

Galam features stories of women with seafarer husbands in his work. The book has nine chapters wherein he carefully unpacks how gendered and familial relations are influenced by male emigration and “characterized by authority, hierarchy, and conflict” (p. 6). 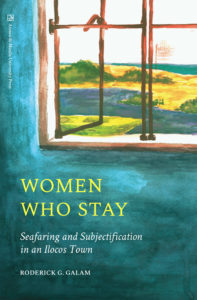 In the introductory chapter, he discusses the theoretical and methodological paradigms to which he anchored his research—subjectivity and narrative inquiry. This was followed with global and local contexts in chapters two and three. Galam writes about the history of the maritime industry in the Philippines and its treatment of Filipino seafarers as disposable workers. The discussion on the industry’s deregulation and setting of minimum standards of employment shows how Filipino seafarers became in demand to the world.

In the context of his field site, San Gabriel in Ilocos region, he explains how becoming a Hawaiiano (a Filipino worker in Hawaii) came to be part of the Ilocano imagination. It began in the 1900s American colonial period where Ilocanos were recruited to work in Hawaii (and California) as plantation agricultural workers. The succeeding chapters of the book show the author’s major arguments and analysis on women’s subjectification, imagined communion, spatial mobility, and relational autonomy.

Chapter Four focuses on the subjectification of women who stay behind and perform their mothering work, and at the same time how they also organise their everyday lives depending on the routines of their husbands—him being periodically away and around the household.

Galam conceptualises bukodmo amin (Ilocano for being on one’s own) as women becoming single or solo parents during the time that the husband is away. The concept includes not only the physical work but also the cognitive and emotional work of holding the family together (p. 72). Through the responses of the participants in the context of decision making, facing tragedies and emergencies, and disciplining their children, Galam notes how women strategise and manage their time so that their husbands will not be disappointed in them, and, at the same time, avoid criticisms from their in-laws. The chapter also includes a thorough analysis of how women “surrender” and “share” their childrearing and household tasks when their husbands are at home. This is done in order for the husband to have bonding time with the children and for him to appreciate the work that his wife has been doing all this time that he is at sea.

“Gender negotiation” is how Galam defines such complex processes of surrendering and sharing of work. There is also a lot to say about the chapter’s discussion regarding time use and conception: on women’s time out from maternal care and time put in to spousal care, and on the men’s time out from work and time into bond with neighbours and friends. The latter is usually contested by women based on financial and health issues.

Galam demonstrates the “activities that bring their husbands home and that brings ‘home’ to their husbands” (p. 99) in Chapter Five by showing the communication practices in a transnational context. The chapter showed an account of how mobile phone communication came to San Gabriel and how it was liberalised nationwide. Galam finds that telecommunications duopoly Globe Telecom and Smart followed a business model based on the Filipino sari-sari store (locally arranged sundry store) and retail system to adapt to the needs and capacities of families with members who work overseas. This gave way to the unlimited calls and text promotions together with pasa (send) load and share-a-load (share prepaid load) system to specific beneficiaries.

Phone cards were identified as an important component in the family budget as they enabled families to have a sense of togetherness through regular and frequent calls. The wives maximise the use of these calls and texts to foster father-child relations, discipline children from a distance, break or withhold news, and strengthen spousal ties. However, compared to land-based Filipino workers, “communication between seamen and their families is less frequent, affected by the movement and geographic location” but through telephone calls and text exchanges, the “messy aspects of maintaining a family become visible and audible” (p. 121).

Chapter Six focuses on the impact of transnational gossip on women’s spatial mobility. While there has already been a rich literature on gossip that travels from one family to the overseas worker through their work friends, the situation of seafarers is different because they do not develop a strong social network on the sea as they get assigned to different ships every contract. This means that gossips can reach them only through their natal family and close neighbours who know their mobile numbers or have access to the internet.

The concept of dibersyon (diversion), which means doing more work (particularly farm-related ones) in order to suppress sexual longing and have spatial mobility, is used by women to avoid gossip related to infidelity. Dibersyon is reinforced by what Galam developed as an Ilocano sociocultural category: isu pay, which is a way of thinking how to maximise something or the situation. Wives of seafarers maximise the situation by working and earning while at the same time getting the approval of the circles of people who are most likely to be the source of gossip about them. Chapter Seven uses isu pay in the context of women working.

Galam identifies three ideal types of husbands based on their attitudes towards their wife who wants to have paid work outside the home. This includes the unable-to-compromise husband (insisting that the wife should have full attention to family care), the able-to-compromise husband (who wants the wife to give up work but respects her decision to do otherwise), and the enabler husband (who encourages and supports the wife). Towards the end of the chapter, isu pay is used to reframe the issue of gender roles negotiation towards the stability of the family—that the lack of state assistance makes the family financially insecure and therefore they find ways to cope up.

The relational autonomy through the concept of panagbukbukod (independence or autonomy) was examined in Chapter Eight. The relationship and negotiation between daughters-in-law and mothers-in-law were discussed in the framework of cultural expectations of respect to the elders and debt of gratitude. Galam’s interviews reveal how women view (1) talking back to their mothers-in-law as liberating and empowering, and (2) becoming the recipient of their husband’s remittances (which is previously the mother-in-law) as a symbolic transformation of their status in the family. 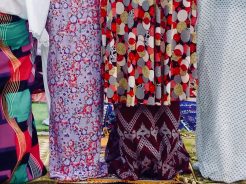 The Mamasapano clash, memories of violence, and the politics of Muslim belonging in the Philippines

On the Mamasapano clash and the exclusionary narratives it reinforced.

Rather than to look at the relation as conflict between two women, Galam views it as “most mothers, did not have other children to depend on and hence might have viewed their daughters-in-law as threatening to their economic well-being” which in a sense will go back again to how financially insecure the natal family is. The significance of the house for the wife is discussed in the same chapter as a sign of a better life and of freedom from in-laws. Such freedom includes cooking based on one’s own tastes, spending money, getting private space, and time management. The house symbolises not just security but also autonomy.

In the concluding chapter, Galam presents his conception of “waiting game” and “hopeful and strategic subjectivity” among the women who stay.

The former is about how these women links their present life, goals, and expectation, and their future life after their husbands have reached their maximum capacity to work on board. The latter sees hope as action (not just emotion) that drives women to be strategic in their decision for the future of the family. The subjectivities of women who stay are shaped not just by migration but also by the lack of role of the state in ensuring the survival of the family.

To end, Galam brilliantly engages with the works not just of migration and gender scholars but also of anthropologists and sociologists who have studied the Filipino family in various settings and time periods. The contexts and concepts were discussed clearly from international to local applications. For readers interested in migration, family, and gender studies, this book is highly recommended. I look forward to reading more of his works.

Veronica L. Gregorio is a PhD Candidate (Sociology) from National University of Singapore. Her dissertation focuses on gender ideologies and intra-household relationships of farming families in Malaysia and the Philippines. Her research interests include gender and development, urban poverty, and teenage pregnancy. She tweets at @veronixgregorio.