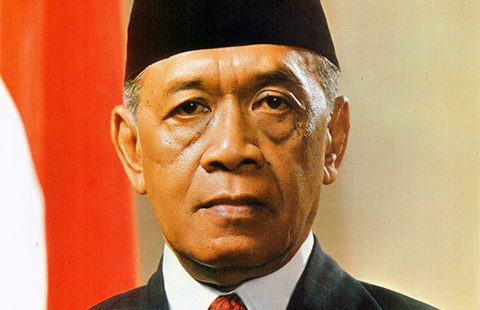 John Monfries, A Prince in a Republic: The Life of Sultan Hamengku Buwono IX of Yogyakarta, (Institute for Southeast Asian Studies, 2015)

Sultan Hamengku Buwono IX of Yogyakarta Sultanate (ruled 1940-1988) is one of the greatest Javanese rulers. He enabled his sultanate to survive and thrive through four different political regimes which surrounded it. More than 20 years after his death, his legacy is still apparent.

John Monfries, a scholar and former Australian diplomat in Jakarta, has written a significant book exploring the complex life of a figure that very much influenced Indonesian politics for half a century.

Born as Dorojatun in 1912, the Sultan was educated at Leiden University. Given the widespread hostility to feudalism in the early phase of the Indonesian revolution (also known as the Indonesian war of independence, 1945-49), it seemed that Yogyakarta Sultanate would come to an end. Angry masses had forced the aristocracy to retreat in Surakarta (Central Java) and East Sumatra, and one may have thought that Yogyakarta would be the next. But the Sultan managed to take advantage of the revolution to save his monarch and draw support to his existence by showing incessant support to the Republic of Indonesia whose independence was declared by Sukarno on 17 August, 1945.

It was very likely that the Sultan, with the positive reputation he received due to his devotion to the revolution, would assume key posts on the national stage. However, he only occupied minor positions during the 1950s, his ‘decade of disappointment’ (p. 234), due to his opposition to many of Sukarno’s policies. After the 1965 coup, together with Army General Suharto and another civilian leader Adam Malik–called the ‘triumvirate’ by Monfries– the Sultan began to create a post-Sukarno Indonesia, the “New Order.”

New Order economic policies advocated domestically and internationally by the Sultan included eradicating vested interests in the economy, opening up the country to foreign investment, and encouraging private enterprise. Warmly welcomed by the public, these policies radically contrasted with Sukarno’s neglect of economic issues.

Despite this success, the Sultan’s appointment as Suharto’s vice president (1973-78) soon became a source of dissatisfaction. According to Monfries, the Sultan had no real power and was only tasked to carry out symbolic functions. He withdrew into the backstage of Indonesian politics by his resignation in 1978.

Feudalism, democracy and state management
Monfries critically examines one of the biggest achievements of the Sultan: his success in securing a Javanese monarchy in the form of the Sultanate within an emerging democratic state. Despite the fundamental difference between the two, he proved that their amalgamation is possible in the Indonesian context. This is mainly due to the fact that during the revolution the Javanese sultan turned into a widely popular Republican leader and a well-known anti-Dutch patriot.

This fame, according to Monfries, ‘became the bedrock of his subsequent impeccable reputation’ (p. 323). Monfries points out several reasons for this popularity, which also differentiated the Sultan from other native rulers in Java and Sumatra who failed to defend their kingdoms’ existence in the face of the so-called social revolution. These reasons included the optimal use of his status as a Javanese sultan to appeal Javanese society, his continuous support of independence, his loyalty to the Republic, and his support for pro-Republic militia (pp. 161-2).

Moreover, Monfries explores another key point in the Sultan’s life that greatly shaped Indonesian politics: his administrative capabilities, which were one of the main reasons for his various appointments between 1946 until 1978. For Monfries, the Sultan’s oratory skills may seem dull in comparison to Sukarno, but he had what Sukarno lacked, namely the skill to ‘organise and run meetings, to follow through agendas and seek consensus’ (p. 45). This skill proved important during the post-independence period, when the Sultan was involved in hundreds of meetings concerning, among other things, the cabinet, the Indonesian scout movement (informal education for the youth held mainly outdoor, which focuses on the development of useful skills, co-operation, and learning by doing; it is like the scout training for boys and girls introduced by renowned British Army officer Robert Baden-Powell), and aid assembly with foreign governments and organizations, with varying degree of success.

The Sultan owed these skills both to his time studying with the Indology Faculty at Leiden, where he learned to become middle-level public administrator, and also from his own experience as a reformer of the bureaucracy in his own sultanate.

Myth breaker
Numerous Indonesian accounts on the Sultan’s contributions see him as a legend, encircled with historical myths. Unlike these works, the main strength of Monfries’s book is the author’s position as a myth breaker.

Monfries demystifies at least three widespread beliefs about the Sultan. First, in his coronation speech in 1940 the Sultan stated: ‘I have had an extensive Western upbringing, yet I am and remain above all a Javanese’. This catchphrase is so well-known that many Indonesians nowadays see it as nationalistic sentiment of a Javanese ruler, while others interpret ‘Javanese’ here as ‘Indonesian’. Monfries doubts this claim because no adequate proof exists to suggest that the Sultan ‘thought of himself as anything but a Javanese prince.’ (p. 81)

Second, in other part of the speech, the Sultan declared that he ‘will work for the interests of the Land and People’. In the Indonesian version of the speech, the ‘Land and People’ was translated into ‘nusa dan bangsa’ (homeland), thus implying that the Sultan felt concerned with the whole of Indonesia. However, Monfries suspects that this was originally a Dutch term, Land en Volk, and in 1940 its meaning was obviously Yogyakarta principality, not the entire country. Therefore, a Javanese king would not intend to ‘represent citizens of the Indies outside his principality.’ (p. 81)

The third and perhaps the most popular myth concerns the Mataram Canal and the romusha (forced labour, ‘хЛЮхЛЩшАЕ’) question. In 1944, the Japanese occupation forces built a thirty kilometre long canal in Yogyakarta, known as the Mataram Canal, intended for irrigation, provision of fresh water, and prevention of flood. In Indonesian accounts, it was said that the canal was the proof of the Sultan’s excellent ability to prevent the Japanese sending thousands of Yogyakarta youth abroad to become romusha. Instead, these young men were employed in the canal project. Monfries argues that this interpretation is an exaggeration. Monfries offers some reasons: Yogyakarta’s problem of rice was not much worse compared to other regions in Java and the Sultan was not involved in romusha recruitment (pp. 109-110). For Monfries, the Sultan’s contribution to the project should be acknowledged but not overstated.

Methodologically speaking, this book is a noteworthy answer to the accusation that biography tends to be elitist. Monfries does not isolate the Sultan as the sole hero, but connects him to wider phenomena and larger sociopolitical groups. So, the Sultan’s life did not just tell about the life of a king, but also the experiences of less privileged communities and actors outside the kraton (palace) walls in modern Indonesia. These people included the Javanese employed as forced labourers, Chinese minority, and the Indonesian communists.

But it is surprising that Monfries’s work ignores the role of the Sultan’s wives in political decision-making process. He seems to take for granted the traditional view on the role of wives in Indonesia, in particular Java (the absence of public involvement and total dedication to household matters).

In fact, some contemporary reports stress that the Sultan’s fifth wife, Sumatran born Norma Musa (they married in 1976 after one of his four wives passed away), played a major role in his life outside the kraton walls, and was perhaps the Sultan’s political advisor. Given that the Sultan spent most of his work time in Jakarta, that Norma’s cleverness was widely known among Republican politicians, and that she was an insider in political circles in Jakarta (she was once personal assistant of President Sukarno), this vice president’s wife deserves more attention.

Nevertheless, overall Monfries’ study fills a gap in the English language scholarship on 20th century and contemporary Indonesia. More importantly, it offers new perspectives in understanding key political problems in 20th century Indonesia, including the fragile existence of monarchy in a democratic country, the civilian-military dichotomy in a developing country, and the fate of a freedom fighter in post independence nation-state building.

Muhammad Yuanda Zara is a researcher at NIOD Institute for War, Holocaust, and Genocide Studies (Amsterdam) and a PhD Candidate at Amsterdam Institute for Social Science Research, at the University of Amsterdam.