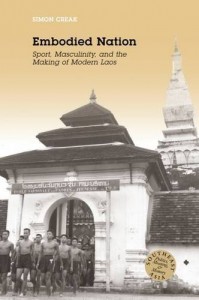 Laos has taken part in seven Summer Olympic Games since 1980 (joining the Soviet-led communist boycott in 1984), usually sending three to five athletes, who have never won an Olympic medal. The peninsular Southeast Asian country of some seven million people has taken part in nine Asian Games, winning a total of 10 medals (none gold) and regularly finishing at the very bottom of the medal table. Despite this discouraging record, however, Simon Creak’s Embodied Nation reveals how modern sport and physicality has shaped the modern history of this product of French colonialism. It would be difficult for Creak to pretend that his subject is self-evidently crucial to the histories of Southeast Asia or to the world of modern physical culture; he in fact describes contemporary Laos as “a minnow in the sporting world” (p. 223). However, as the reader soon discovers, international medals won – that is, gaining the hundredths of a second on a 100-meter dash here, the few extra punches landed in the boxing ring there – are not the point when one looks at this question seriously. Indeed, is it possible that we might learn more from the institution and evolution of modern sport and physical culture in a country where big-time sporting success does not compel the entire population, than in one where it does, and where these ideologies lie more obviously close to the surface of daily life and belief?

Creak’s narrative is built upon a keen sensitivity to theoretical analysis; he is as comfortable with Alonso’s notions of physical practice and national consciousness as he is with Archambault’s 1960s work on Lao cosmogonies, Geertz’s notion of the theatre state and power through spectacle, and Verdery’s work on revolution and language. Again, it is precisely because Laos is not the traditional home of legendary sporting greatness that Creak is able to explicate more clearly why, where and how the varied ideologies of modern sport have been bought, sold, pursued and abandoned by French colonial agents, Lao statesmen and fascist strongmen, Soviet, Chinese and Vietnamese advisors, and contemporary young women sprinters and swimmers alike.

After a theoretical introduction, the book’s eight chapters are chronologically organized, although Creak does much more than present any simple timeline of sporting contests, records, and performances. Actually, this strength of the book is also related to what I would consider its greatest weakness: there are many moments where Creak’s theoretical analysis would be strengthened even more with specific examples, from the historically significant National Games competitions of the 1960s (pp. 124-137) or Lao-Thai boxing matches of the 1970s (p. 205), for instance. When did athletes’ specific choices, or referees’ decisions, or spectators’ chants and behaviors affirm or challenge the dominant sporting ideologies of the time? In an academic twist on the old sportswriter cliché of “that’s why they play the game,” the study of modern sport and physical culture often depends on an accounting of the spontaneous, the unscripted, the unforeseen drama that this cultural site – for all its obvious flaws – can still deliver.

Creak’s chronological account succeeds, though, by illustrating just how many twists and turns (related to the obvious national/political transitions that Laos has endured) this nation’s sporting culture has gone through. The focus of Chapter One is on the “authentically” Lao field hockey-like game of tikhi, the study of which by necessity takes us through the colonial history of France’s creation of Laos’s “own unique history and culture,” the game’s possible relationship to polo, its link to native religious ceremonies, its cosmological implications for the ruling regime, and its usefulness in expressing and defining class boundaries and rivalries (pp. 24-47). From here we move to Chapter Two and its focus on the Vichy-era Lao Nhay “cultural renovation” movement of 1941-45 – a fascinating study of how fascist and racial doctrines from the metropole filter into the self-definition of the residents of the colonies being traumatized in the precise name of these ideologies. This is a fascinating chapter which tells a story that perhaps could only be Lao: the role of meditation (pp. 71-72) in the militarized curriculum of the ├Йcole Locale des Cadres d’├Йducation Physique du Laos is a very evocative example of the ways that “traditional” and “modern” cultures swirled through the world of young Lao men and women of the World War II moment in Southeast Asia. Memories of this movement are even more fascinating; we can see the complexity and room for indigenous innovation within this seemingly tightly bound site of colonial fascism when one participant later recalls how “We will never forget [the Lao Nhay movement] … We were well disciplined which gave us the feeling that the Lao can rule themselves.” (p. 77)

Chapter Three follows the militarization of masculinity in newly independent 1950s Laos. Continuities from the Vichy era and their mixture into new nationalist symbolism are most memorably referenced by a striking 1950 photograph of uniformed male students of the ├Йcole Locale des Cadres de Jeunesse et d’├Йducation Physique saluting (with straight arms) the national flag outside the famed That Luang stupa (p. 99). This gendered view of body and nation carries into the 1960s and Chapter Four, which mainly investigates Laos’s National Games competitions of 1961 and 1964. Although, as pointed out above, more specific athlete- or spectator-centered memories or accounts would have enriched this section, the examples that Creak provides here, particularly with regard to the Olympic-inspired but uniquely Lao “National Games flame” (p. 126), evoke quite effectively the dreams of a modern Laos that could be united through the affections and desires at the heart of competitive sport.

The collapse of the institution of the National Games came in 1964 with the overthrow of Major General Phoumi Nosavan. At this point in Creak’s narrative, in Chapter Five, another important historical throughline, that of Laos’s “dynamic of emulation and rivalry” with both Vietnam and Thailand (p. 142), reemerges. This crucial element of modern Southeast Asian history is also part of what makes Creak’s account so specific to Laos’s modern heritage, at the same time that he is addressing the institution and adaptation there of these universalized ideologies of modern sport. Laos’s participation in the South East Asia Peninsular (SEAP) Games between 1959-75 was defined by these rivalries and by their willingness to accept and take pride in their more powerful neighbors’ often condescending praise of Lao manners, “sportsmanship” and “discipline,” if usually not their actual sporting prowess. “Victories” of a different sort – “mental strength,” “progress” and trying one’s hardest – could be won and advertised domestically, although at some point some in the Lao press began to critique this too-easy satisfaction with last place (pp. 144-152). Lao-Thai antagonism could be relived and replayed on the soccer pitch, where once in a while the Lao youth actually could beat their “big brother” (p. 154). Sustained sporting ties to Vietnam, meanwhile, came about via the rise of the Pathet Lao communist movement, which is ahistorically but tellingly credited by many as achieving the true birth of modern Lao sport by sending representatives to the 1966 Asian GANEFO (Games of the New Emerging Forces) in Phnom Penh (pp. 163-164). In this account, the history of French/colonial/fascist/bourgeois-inspired Lao sport simply does not count as authentically “Lao,” even if Creak allows us to see how closely related these modern sporting ideologies truly are.

After this sporting Year Zero, Lao physical culture achieved full development, as outlined in Chapters Six and Seven, with the heavy involvement of Soviet, Chinese and Vietnamese assistance under Lao People’s Democratic Republic rule beginning in 1975. For the next decade or so, Lao sport was dominated by discourses of political education and “new socialist people,” the weaknesses of old-regime sport as anti-masses, anarchic, elitist, and authoritarian, and the physical continuum between sport, calisthenics, and labor. Most revealing is the communist-era emphasis on how “enjoyable,” “lively,” and “fun” all of this New Lao Sport was (p. 198-199) – a clear sign that in reality this drab and preachy cultural sphere was experienced by the Lao revolutionary masses as anything but enjoyable, lively, or fun. It is also during this time that Laos entered the Olympic movement for the first time, in large part due to Moscow’s hosting of the 1980 Olympic Games. Especially since most of their Southeast Asian rivals joined the US-led boycott of these Games, Lao authorities could now speak of having helped their small nation to “catch up” with their longtime nemeses in this vital realm (p. 211).

Creak’s Chapter Eight concludes Embodied Nation by focusing on the 25th Southeast Asian (SEA) Games held in Vientiane in 2009. This mini-mega event allowed Laos to show off the nation’s modest commercial progress, charming traditions, political stability, and healthy sportsmanship. These SEA Games also brought out some of the most important trends and forces in Lao society today: China’s financial influence (the Chinese Development Bank financed the new National Stadium), Laos’s continued rivalry/aspiration relationship with Thailand, and suspicion of their Vietnamese neighbors’ financial and political ambitions in Laos (pp. 227-228, 237-238). But overall the combination of 110 medals for the Lao hosts (seventh most of 11 participating nations), public nationalist jubilation over these successes, “tourism gold,” and official foreign recognition of an “excellent Games” (pp. 230-231) made this event a universally recognized success. These discourses place Lao sport at the center of 21st-century neoliberalist sporting ideology – simply the most recent paradigm shift of so many since the early days of French rule. Creak’s book is an excellent guide to these many transitions and how the people of Laos have experienced them; it will be the authoritative account of this history for years to come.

Andrew Morris is Professor of History at California Polytechnic State University at San Luis Obispo. His works include Colonial Project, National Game: A History of Baseball in Taiwan (2010) and Marrow of the Nation: A History of Sport and Physical Culture in Republican China (2004), both published by the University of California Press.