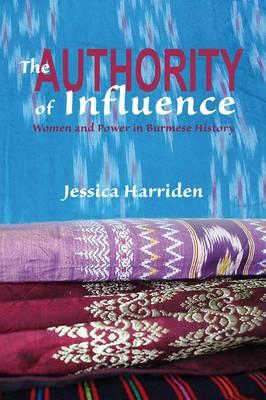 Jessica Harriden, The Authority of Influence: Women and Power in Burmese History

The publication of The Authority of Influence: Women and Power in Burmese History comes at a critical time in Myanmar’s history. Many of the “truths” about women’s rightful place in society long taken for granted have begun to face challenges, from a diverse array of actors and in a multitude of ways.

In the April 2012 parliamentary by-elections, women candidates won approximately thirty percent of all seats contested; thirteen of twenty-four women candidates won their races. But these women joined a parliament more than ninety-six percent of whose members are men. Local and international groups and organizations have begun to create dedicated programs addressing the issue of women’s leadership. A number of studies have been conducted on the topics of women’s participation in decision-making and women’s leadership roles, and their findings debated. Several more studies are now under way. Fora and training programs on leadership skills, aimed above all at younger women, are being held. Local organizations are actively involving members of parliament in capacity-building and creating opportunities to increase their exposure to issues concerning gender and governance. Networks of women’s and gender organizations formed over the past several years are increasingly directing their efforts to advocacy for women’s rights and gender equality. The country has in recent times seen women’s action campaigns in response to women’s inability to enjoy their rights of bodily integrity and to live lives free of harassment and violence. With the gradual easing of censorship rules and practices, women are beginning to express themselves through the arts on topics relating to the complexities of female roles and identities in Myanmar society.

Despite this increase in interest and in opportunities for undertaking gender-related work, gender issues in the Myanmar context remain profoundly under-researched and relatively poorly understood. Scholarly treatments of gender in Myanmar, past or present, remain scarce. Jessica Harriden’s book thus fills a gap in our understanding of an important and controversial topic – the sources, nature and limitations of women’s power in Burmese or Myanmar society over time, “from pre-colonial times to the present day” (page 4). As other scholars, notably Barbara Watson Andaya and Chie Ikeya have convincingly demonstrated, the notion of the “traditional” high status of women (Andaya 2000: 6; Ikeya 2005: 53) in Myanmar and in Southeast Asia more broadly has been pervasive. It has also proved malleable, invoked to serve a range of political interests. That notion, increasingly seen as derived from early colonial perspectives, ascribes “high status” to women on account of their historical independence and freedom, including their participation in the economic sphere. However, this purported high status did not encompass or legitimize leadership roles for women, a matter to which colonial observers as well as modern scholars have paid all too scant attention.

As the title of Harriden’s book suggests, conceptualizations of power in Burma or Myanmar are complex and multifaceted. In deconstructing its various components – authority (ana) and influence (awza) – and discussing the gender-specific notion of hpon (an innate power disproportionally accorded to men and seen to legitimize male leadership and authority), The Authority of Influence enables readers to gain a more nuanced understanding of the ways in which women have navigated their social existence.

While Harriden engages closely with the concept of power and its contextual specificities, she does not accord the same treatment to the category “Burmese women”. The borders of the administrative entity of Burma or Myanmar have shifted with time. However, the all-encompassing time-frame of Harriden’s analysis, coupled with the fact that much of the analysis of modern day experiences of women is reflected through those of expatriate Myanmar women (experiences which, while immensely enlightening, are necessarily the basis of only a partial historical account), makes the term “Burmese women” as used here problematic as an analytical category.

Harriden’s work, in carefully sifting through historical accounts and bringing to the forefront women’s experiences and prevailing societal attitudes, is illuminating. As she writes, the women “were ‘there’” (page 5), but they have simply not been the focus of much previous historical research. The Authority of Influence enables us to engage with the variety of conditions and influences that have informed historical and contemporary understandings of gender and power in Burma or Myanmar. These include Buddhism, colonialism, modernisation and militarism. Control of sexuality, means of state administration, customary laws, class and ideology all emerge as important determinants of women’s room to manoeuvre as gendered beings.

Moreover, Harriden’s work shows the continuity and consequent importance of familial connections and patronage networks and the resulting fragility and compromised position of female leadership, formal as well as informal, over time. Its historical perspective on women and power in the pre-colonial context will prove particularly valuable to any consideration of challenges for the emerging women’s movement in contemporary Myanmar. It will deepen readers’ appreciation of the deep roots of resistance to women’s leadership exemplified through proverbs – such as “when a woman rules a country, the country will be destroyed” – still widely in use.

In Harriden’s discussion of the decline of women’s status under military rule, her use of gender analysis comes across as particularly astute. She convincingly demonstrates the multitude of ways in which women’s subordination and discrimination have been manifested in the past several decades including, for example, through education policy and state-sponsored violence. It is in this section of The Authority of Influence, too, that Harriden’s discussion of intersectionality, of the diversity of experiences of women belonging to different social classes and ethnic groups, becomes more prominent.

The section of the book dealing with the status of women under the State Law and Order Restoration Council (1988-1997) and the State Peace and Development Council (1997-2011) juntas suffers at times from the availability of only scant source materials. Perhaps for this reason, Harriden resorts in places to simplistic analysis, supported less by contemporary data and information than by general statements taken out of context. Some sections in this eighth chapter of the book also appear to be more coloured by the author’s own views than much of the rest of The Authority of Influence. Coupled with the lack of sources, this colouring brings the chapter’s analytical value into question.

Towards the end of the The Authority of Influence, Harriden analyses the particular challenges faced by what she calls “expatriate women’s organizations” – that is, organizations composed of Myanmar women operating outside the country and to some extent across the border into Myanmar. These challenges include their often close alignment with male-led opposition and ethnic-nationalist organizations and the resulting need to navigate between on the one hand upholding and promoting, as women are typically expected to, an ethnic-nationalist identity and cause and on the other finding reason to challenge certain aspects of these very same cultures, especially when it comes to gender-power relations.

One aspect of history conspicuously absent from The Authority of Influence is the role of local groups, organizations and individuals who worked tirelessly and with much difficulty for increased gender equality and the empowerment of women inside the country during its last decade under direct military rule. The formation of gender-focused organizations in Myanmar began in the early 2000s. These organizations multiplied during the last years of that same decade. Despite Harriden’s acknowledgement of the “recent proliferation of women’s organizations inside Burma” (page 12), her book’s discussion of women’s status and roles inside the country in recent history is almost exclusively focused on government-backed mass organizations and on the role of Daw Aung San Suu Kyi. Chapter 7 treats Daw Aung San Suu Kyi, while Chapter 8 discusses the role of women inside the country, focusing mostly on the role of the mass organizations. Especially when contrasted with the book’s analysis of the range, scope and activities of the expatriate women’s organizations, a simplified and somewhat unbalanced picture of the development of the past decade and a half emerges.

This picture is unfortunate for many reasons. Most importantly, Harriden’s silence on activism from “inside” deprives local women’s groups and gender-focused organizations of representation and “voice” in this important historical study of “Burmese” women’s power. As feminist theorists and activists have taught us, research is a subjective activity. Choices of what to include in and what to exclude from any given account can and often do have profound political consequences. The political implications of research choices become particularly acute when the subject of study remains in itself highly politicized, especially in light of the immense complexities surrounding internal and expatriate strategies for survival and for action to bring about social and political change. Greater clarity about the period covered or the types of actors under study would have mitigated the problematic silence that results from the all but total omission of civil society voices from inside Myanmar in The Authority of Influence.

Another unfortunate consequence of this silence is the missed opportunity to highlight the many similarities in the experiences of women inside the country and outside, particularly in terms of relating to gendered cultural norms and navigating ethnic and political identities. These experiences have had important impacts on women’s organizational strategies. While Harriden demonstrates to wonderful effect the successes of the expatriate Burmese or Myanmar women’s groups in collaborating across ethnic lines, transcending ethnic politics and thus collectively addressing women’s common concerns, this analysis does not extend to groups operating inside the country. Had The Authority of Influence brought such shared experiences to light, it would have greatly served current efforts to bridge the domestic/expatriate divide – a need that the author herself highlights. Moreover, the book’s likely readership of scholars and development programmers would have gained from a more richly painted picture of gender-responsive civil society voices and action inside the country. Such a picture would have enlarged the knowledge base relating to gender in Myanmar, an under-researched and under-programmed field, on which those readers could draw in their work.

In The Authority of Influence, Jessica Harriden succeeds both in tracing the discourse of the “traditional high status of women” in Myanmar over the course of history and in showing the contemporary challenges for women’s empowerment in the shadow of this notion. She aptly summarizes this dilemma when she writes,

Burmese women have been told that they do not need to be empowered, that they already have the same rights as men. But they have also been socialized to accept that men are leaders and they should be followers. Women have been taught to prioritise their families and their nation over the development of their own talents and potential. They have been encouraged to accept ideas, practices and institutions that deny them the same opportunities as men to exercise power and influence in their own society. (page 314)

Harriden arrives at the conclusion that – despite the multitude of constraints, structural and cultural – Burmese women “have proved themselves to be resourceful, engaged and influential, whether as king-makers in the past, as spiritual guides, educators, social commentators, politicians and peace-activists, or as ‘home-ministers’” (page 314) At the same time, her work demonstrates that broader segments of the country’s women have not been able to take advantage of the crucial turning points in history, at which greater opportunities for women to exercise power appeared imminent but ultimately remained elusive. In light of the ongoing processes of definition and negotiation of women’s appropriate roles in Myanmar society, this volume’s treatment of that history offers immensely valuable lessons.

Annami Löfving is a consultant on gender issues in Myanmar, where she has lived since 2007. She serves as a technical resource person with the Gender Equality Network, an inter-agency combine of more than seventy local and international groups, organizations, networks and individuals working for gender equality and women’s rights in Myanmar. She has a particular interest in women’s participation in public life and decision-making.