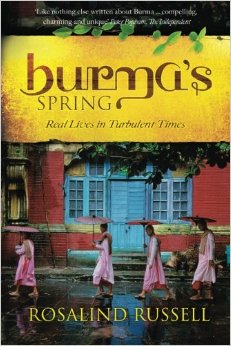 This new book by Rosalind Russell brings colorful but ordinary Myanmar stories to life from an outsider’s perspective. As the sub-title suggests these are “Real Lives in Turbulent Times”. Burma’s Spring shows the spice and flavor of Myanmar’s nascent transition. For non-Myanmar readers it may seem to deliver the expected: stereotypical perceptions of the military regime and the suffering inflicted on the people. But Russell goes further by covering not only the struggle and sacrifice of prominent figures like Aung San Suu Kyi but also tales of unsung heroes that we have overlooked. We learn of their lives, their beliefs and, more importantly, their hopes, in a journey that introduces readers to everyone from undercover journalists to undercover officials, from a housemaid to a girl band, from a monk to the 969 movement.

Burma’s Spring starts with the double life of Russell herself as an undercover journalist for Reuters sent in to cover the monks’ uprising in 2007, also known as the Saffron Revolution, and as an undercover reporter for The Independent. She was known as Phoebe Kennedy, the pseudonym that she used while accompanying her spouse, who was head of an international aid agency in Myanmar in the aftermath of Cyclone Nargis in 2008. Whether it was worth risking her own welfare and the agency’s reputation to produce Burma’s Spring, whether it was ethical to do so, and even whether it is now worth her exposing herself will depend on the judgment of the reader. But one thing is quite certain: her book highlights the difficult position of aid workers and their families in controlling the temptations to risk an aid agency’s relationship with the host country. It makes me wonder how a Myanmar government official would react to reading Burma’s Spring.

The book gives a mixed picture of Myanmar society prior to the ongoing period of reform and liberalisation. Discussion of the fears of the military about “R2P”–jargon for the “responsibility to protect”–in the wake of Cyclone Nargis and of the struggle of “the Lady” and other activists offers readers the usual information that they will learn from the international media.

But Russell extends our understanding of Myanmar society by introducing us to her main characters Mu Mu, a Kayin migrant worker, and Zayar, a fixer for Phoebe Kennedy whose dream is to become a journalist. Mu Mu was Russell’s housemaid. And Russell tells us about her life as a migrant worker who travelled to Bangkok and was pressured by her family to send regular remittances and never to come home. Her hopes of taking a short cut out of poverty were hampered when she failed in the effort that, having had nothing to do with politics and ethnic conflict inside Myanmar, she made to become a refugee. In the meantime, her boyfriend–also a migrant worker from her hometown–betrayed her so that he could fast-track his place on the waiting list to be resettled in Canada by marrying a Kayin refugee. On the other hand, Zayar, whose wife wanted him to become a common salary man, chose instead to struggle as an amateur reporter in Yangon and worked hard to make sure that Phoebe Kennedy was exposed to real stories.

We also get a taste of the resilience of the “MeNMa girls” and Darko’s “Side Effect” punk group against the backdrop of what is still a conservative society. These groups struggled to distinguish between creativity and indecency. Then there is Min Wai, a fortune teller who has to play his role carefully when predicting good and bad karma and acting as a social counselor in a superstitious society. We get to know Monk Owen,born on the eve of the 8.8.88 uprising, and how he came to be exposed to a modern education that supported his desires to change Myanmar. Taken together, these characters help sketch a portrait of Myanmar’s society in the mind of readers.

Russell’s book offers insights for Myanmar readers about changes that they do not notice or changes that they may consider unimportant. It also shows the differences between views from inside and outside with regard to recent changes in Myanmar. For a regular traveler to Myanmar, the changes in Myanmar mean visas on arrival, fewer travel restrictions, money exchange counters, ATMs, mobile phones and air-conditioned taxis. These changes are mostly physical. For people like Mu Muand Zayar, the awakening of their hopes and the economic and political breathing spaces are really the most significant changes in recent times. In relating Mu Mu’sdecision to go back and settle in Myanmar, Russell has clearly reflected the feelings of some among the vast Myanmar diaspora.

Burma’s Spring may disappoint some Myanmar readers for not including a chapter on Naypyitaw, the new capital which has profoundly affected the lives of Myanmar people–especially public servants and their families–since its establishment in 2005. And I really doubt whether the general public in Myanmar have the same view as Russell, who portrays the MeNMa girls or the punk bands as important markers of social change. What is important to an outsider may not be so important to an insider. It is also something of a pity that Phoebe Kennedy could not persuade senior government officials to come out of the closet and reflect on their experience as servants of the system, which is so very human.

In summary, Burma’s Spring serves its purpose for multiple readerships. It is pleasant reading on the good and the bad guys, with a twist in the tail. For serious readers, it will garnish their understanding of Myanmar. It would be interesting to read any book reviews from Myanmar, should the book be translated into the Myanmar language. A note of caution is that Burma’s Spring should not to be confused with The Burma Spring: Aung San Suu Kyi and the New Struggle for the Soul of a Nation (2015) by Rena Pederson. The latter obviously focuses on the Lady while the former brings real stories from real lives. Stories so real, yet so often overlooked.

Chit Win is a PhD candidate in the ANU College of Asia and the Pacific.

Pederson, Rena. The Burma Spring: Aung San Suu Kyi and the New Struggle for the Soul of a Nation. New York and London: Pegasus Books, 2015.