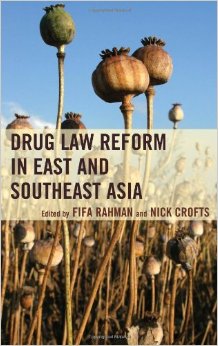 At four o’clock yesterday morning, Myuran Sukumaran and Andrew Chan were picked up from their Bali prison in a Brimob armoured vehicle. They were loaded onto a chartered aircraft headed one hour to the west, to Cilacap in West Java. From there they were hustled onto a boat and ferried the last fifteen minutes of their journey to Nusa Kembangan, a fragment of land oddly fractured from the mainland. Myuran and Andrew will be given 72 hours’ notice before a firing squad assembles at midnight to shoot them in the heart. Their hands and legs might be bound. They can choose to have their lawyer present, to stand, sit or kneel or to forgo the blindfold, but they cannot escape death.

Myuran and Andrew will not be alone. They will be executed along with eight other Indonesians and foreigners, most also for drug offences. There’s the Filipina domestic worker, widow and mother of two, Mary Jane Fiesta Veloso who, after being stood up by her arranged employer, was convinced by drug traffickers to shepherd two suitcases of heroin into Yogyakarta. There’s the French father of four who denies his involvement with an ecstasy factory in Banten. The Nigeria gospel singer, Silvester Obiekwe. The Brazil surfer Rodrigo Gularte, who has schizophrenia and bipolar disorder. The Nigerian, Rhaeem Agabje Salami, who, seven years in, found his life sentence converted to the death penalty. The Ghanian arrested with just 50 grams of heroin, and the Indonesian, Zainal Abidin, caught with 58 kilograms of marijuana on Sumatra’s Aceh-Jakarta belt.

Plans for these executions follow those of a batch of six others who died in January. One of the six was an Indonesian national from West Java, Rani Andriani, so distressed by a $500 debt that she couriered 3.5 kilograms of heroin through Sukarno-Hatta airport en route to London. A Dutch national, a Nigerian, and a Vietnamese were also shot for drug related crimes. Brazilian Marco Archer Cardoso Moreira, who smuggled 13 kilograms of cocaine in hang-gliding tubes, reportedly shat himself as they dragged him from his cell. He died weeping for his last rites.

In this timely edited volume Fifa Rahman and Nick Crofts review drug policy issues around East and Southeast Asia in a series of twenty short essays. Throughout the book, the region’s commitment to capital punishment looms large. Fifa Rahman observes that the death penalty is mandatory for many drug offenses in four Southeast Asian countries – Malaysia, Brunei, Singapore and Laos – while discretionary use of the death penalty is applied in four others. Use of capital punishment is also not necessarily fading on some kind of inevitable civilizing trajectory. Although India has struck down its mandatory death penalty and Myanmar, South Korea, Laos and Brunei are abolitionist in practice, Taiwan recently reinstated the punishment, and the Indonesian government’s enthusiastic re-embrace of the practice comes after an unofficial four and half year moratorium between 2008 and 2013.

Indonesia claims that its return to capital punishment has come about in the face of a tidal wave of illicit narcotics, but, as Rahman asserts, there is no statistical evidence that the active use of the death penalty influences overall drug seizures or drug use. Regionally, Indonesia is hardly a regular user of the death penalty. Last year Malaysia executed one person for drug offences, but nearly 1000 people languish on death row in the country, mainly for drug offenses. Vietnam is Southeast Asia’s most prolific executor, sentencing hundreds of people annually to death in executions that are classified as a state secret. But, as Rahman points out, even Vietnam’s record is eclipsed by China, which in 2011 alone executed 4000 people. Drug offences have overtaken murder as the prime offence leading to capital punishment. As Twitter lit up today in support of #boycottBali, one tweep asked, “whatcha gonna do, boycott Chinese goods too?”

But as the authors of this edited volume make clear, the use of the death penalty is just one in a catalogue of gross human rights violations employed by countries across Southeast Asia in the war against drugs. Even more troubling is Southeast Asia’s unofficial campaign of extrajudicial execution. The obvious example here is Thaksin Shinawatra’s 2003 “war on drugs” in which, as Jimmy Dorajabee, Mohamad Firdaus Zakaria and Dean Lewis outline in their chapter, some 350,0000 of people were blacklisted by the Office of the Narcotics Control Board. Over a period of just three months, 2800 alleged drug users and traffickers were executed. An internal government report showed that more than half of those killed had no connection to drugs whatsoever. As Dorabjee, Zakaria and Lewis note, Southeast Asian governments have failed to walk the thin line between “wars on drugs” and “wars on drug users” (page 96). Indeed, the pressure to meet the aspired “Drug Free ASEAN 2020” has only intensified the use of criminalization and eradication measures and made drug users more vulnerable to human rights abuses and the region’s unforgiving criminalization regimes.

Despite the dominance of scorch-and-burn policy approaches to narcotics in the region, and as the contributors to this volume note, harm reduction policies are increasingly gaining traction amongst the region’s bureaucrats and health departments. Harm reduction, observe S. S. Lee, David Jacka and Nick Crofts, “accepts the reality of less-than-healthy personal behavior” and “attempts to assure conditions for people to optimally moderate their behaviors” through interventions such as needle exchange and methadone substitution (page 16). Many of the region’s governments have long experimented with community-based services in scraps and pieces. Malaysia has experimented successfully with methadone centers, expanding its effort to 674 sites in 2010. China, too, opened its first needle exchange program in 1999, which by 2006, had proliferated to 790 sites throughout the country. Southeast Asia’s governments have found that harm reduction works; it is just that, in a region in which the power of political elites is in part founded on support from police and military services, shedding a law-and-security-approach to drug policy is politically unpalatable.

Enter compulsory treatment centres, one way in which the region’s governments have negotiated the contradictory pulls between harm reduction and criminal justice approaches, with characteristically perverse results. If the inhabitants of the region’s compulsory care centres were rounded up, they would populate a small city. As Simon Baldwin and Nicholas Thomson point out, in Asia half a million people – a mish-mash of street kids, sex workers, recreational drug users, addicts and dealers – are currently held in mandatory treatment centres, without the legal benefit of due process or clear release dates. Their health needs are subjected to a uniform and unscientific regime of medical treatment, moral repentance and hard labour, presided over by unqualified medical staff and overseen by military or law enforcement officials. Private and state companies are beneficiaries of the work that inmates are required to undertake. Worse, in the region’s compulsory detention centres, users cannot access clean needles or anti-retrovirals. Little wonder that the relapse rate, as China’s example shows, is as high as 95 percent. And yet, the consequences of state-structured relapse are borne individually by Southeast Asia’s addicts. In Vietnam, users who relapse are forcibly recommitted to the centres for a further six years of “treatment”.

The abject failure of the region’s extant compulsory treatment centres has not dimmed enthusiasm for opening up new ones. Just as harm reduction approaches were gathering real currency within the bureaucracy, the Indonesian government opened up the region’s largest compulsory rehabilitation centre in Lido, West Java, run by the police-dominated National Anti-Narcotics Agency. In accordance with the 2009 Narcotics Law, Lido offers “rehabilitation” rather than jail time, but it also operates outside of the national standards for social rehabilitation and the extent of its harm reduction policies is unclear. Drug users have told me that the two-track system of jail-vs.-“rehab” has only opened up a thriving economy of bribes to social workers, court and police officials and health care professionals to avoid incarceration. This is the reality of drug policy in Southeast Asia: an ungainly mongrel of different philosophical approaches, with hardline criminal justice interventions masquerading as harm reduction. Even the effects of new reforms seem to plot a murky, compromised path.

Drug Law Reform is targeted at policy wonks, and, unfortunately, it’s written like it. The articles have a single, sometimes repetitive message advocating more humane drug law policy rather than the twins of eradication and criminalization. Nonetheless, the essays march clunkily on, drawing on a miscellany of evidence, and finishing sometimes abruptly with a hastily added endorsement for harm reduction, as if the literature review ran out of steam. The cases of China and Mainland Southeast Asia are well documented in this book, but, despite a significant body of scholarly literature, Island Southeast Asia gets a poor showing. Indonesia is a bit more than a squiggle in the index, and the poor Philippines does not get a look in at all.

Yet, for contributors to a text designed for advocacy with governments, the authors are refreshingly candid about the region’s governance problems. Crofts and the four co-authors of the chapter on “Law Enforcement and Drug Policy in Southeast Asia” point an unflinching finger at the role of prohibitionist drug policies in corrupting law enforcement and encouraging organised crime. The United National Office for Drugs and Crime, whose commitment to harm reduction often wobbles, also gets the odd kick from the contributors to this volume. Many of the volume’s chapters are ambitious. In their chapter, Priya Mannava, Sasha Zegenhage, Nick Crofts and Nick Thomson trace a path between development and drug use, showing how the higher productivity demands that come with market economies have ushered in an unparalleled amphetamine boom. Others are also novel, such as Faisal Ibrahim’s reading of an Islamic perspective on harm reduction in the face of Malaysia’s “epidemic” of risky practices (page 108). This book attempts a comprehensive look at drug policy in Southeast Asia today in order to persuade the region’s decision-makers that change is in their economic, political and governance interests. One only needs to think of Myuran and Andrew sitting right now in solitary confinement on an island far from home . . . It’s hard to imagine a more worthwhile scholarly endeavor.